Media release from the U.S. fish & Wildlife Service Agency Seeks Information from the Public, Scientific Community before Making Final Decision Current evidence suggests that 15 species on the island of Hawaii are in danger of becoming extinct in the foreseeable future, the U.S. Fish and Wildlife Service announced today. As a result, the Service has proposed […]

Current evidence suggests that 15 species on the island of Hawaii are in danger of becoming extinct in the foreseeable future, the U.S. Fish and Wildlife Service announced today. As a result, the Service has proposed to protect the species under the Endangered Species Act, and is seeking new information from the public and the scientific community that will assist the agency in making a final determination.

Comments and information will be accepted until December 17, 2012.

The Service first identified seven of the 15 species as candidates for ESA protection from 1996 to 1999, due to threats throughout their ranges, including habitat destruction and modification caused by invasive, nonnative plants, feral pigs, sheep and goats, and agricultural and urban development. Other threats include consumption of rare species by nonnative feral pigs, sheep and goats, and other introduced species such as rats and nonnative invertebrates. Native habitat is also threatened by the effects of climate change, which may intensify existing natural threats such as fire, hurricanes, landslides and flooding. In addition, existing regulatory mechanisms are inadequate to protect the species.

Service biologists also have identified habitat that is essential to the conservation of one of the 15 proposed plant and animal species – Bidens micrantha ssp. ctenophylla (ko‘oko‘olau) – and of two previously listed plant species – Mezoneuron kavaiense (uhiuhi) and Isodendrion pyrifolium (wahine noho kula) – that do not have designated critical habitat on the island of Hawai‘i. All three species ooccur in the same lowland dry ecosystem on the island of Hawai‘i and share many of the same physical or biological features (e.g., elevation, annual rainfall, substrate and associated native plant genera) as well as the same threats from development, fire and nonnative ungulates and plants.

For the other 14 species proposed for listing, the Service finds that critical habitat is not determinable at this time due to the lack of analysis needed to identify those areas.

“The Hawai‘i Island listing and critical habitat designation, if finalized, will allow us to better address and manage Hawaii’s endangered species and the unique ecosystems on which these species depend,” said Loyal Mehrhoff, field supervisor for the Pacific Islands Fish and Wildlife Office.

The ESA requires the Service to identify the location of habitat essential for the conservation of the species, which the Act terms “critical habitat.” This identification helps federal agencies identify actions that may affect listed species or their habitat, and to work with the Service to avoid or minimize those impacts. Identifying this habitat also helps raise awareness of the habitat needs of imperiled species and focus the conservation efforts of other partners such as state and local governments, non-governmental
organizations, and individual landowners.

Although non-federal lands have initially been included in these areas, activities on these lands are not affected now, and will not necessarily be affected if the species is protected under the ESA in the future. Only if an activity is authorized, funded or carried out by a federal agency will the agency need to work with the Service to help landowners avoid, reduce or mitigate potential impacts to listed species or their identified habitat.

Today’s proposal is part of the Service’s efforts to implement a court-approved work plan that resolves a series of lawsuits concerning the agency’s ESA Listing Program. The intent of the agreement is to significantly reduce litigation-driven workloads and allow the agency to focus its resources on the species most in need of the ESA’s protections over the next five years.

The final decision to add the 15 species to the Federal List of Endangered and Threatened Wildlife and Plants, as well as the final identification of areas containing habitat essential to the species, will be based on the best scientific information available. In addition, the Service will utilize an economic analysis to inform and refine its identification of this habitat. Only areas that contain habitat essential to the conservation of the species, and where the benefits of this habitat outweigh potential economic impacts,
will be included in the final identification.

The Service is opening a 60-day public comment period today to let the public review and comment on the proposal and provide additional information accept comments and additional information. All relevant information received from the public, government agencies, the scientific community, industry, or any other interested parties will be considered and addressed in the agency’s final listing determination for the species and identification of habitat essential to its conservation.

The Service will consider comments from all interested parties received by December 17, 2012. Requests for a public hearing must be received in writing by December 3, 2012. Comments can be sent by one of the following methods:

The species proposed for endangered species status are: 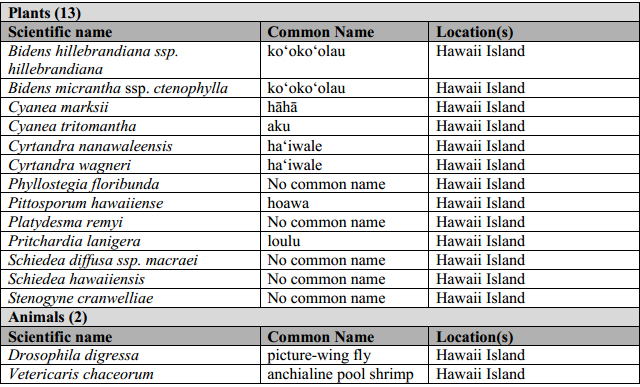