Media release from W.M. Keck Observatory (Kamuela, Hawaii) Astronomers using the W. M. Keck Observatory, the Hubble Space Telescope, and other telescopes on Mauna Kea have studied a giant filament of dark matter in 3D for the first time. Extending 60 million light-years from one of the most massive galaxy clusters known, the filament is […] 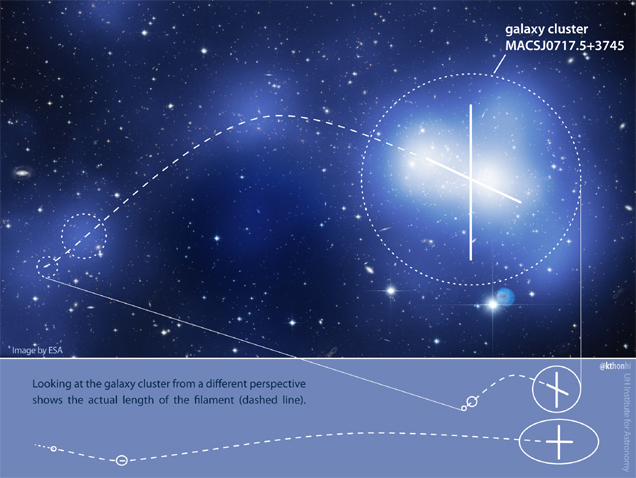 (Kamuela, Hawaii) Astronomers using the W. M. Keck Observatory, the Hubble Space Telescope, and other telescopes on Mauna Kea have studied a giant filament of dark matter in 3D for the first time. Extending 60 million light-years from one of the most massive galaxy clusters known, the filament is part of the cosmic web that constitutes the large-scale structure of the Universe, and is a leftover of the very first moments after the Big Bang. If the high mass measured for the filament is representative of the rest of the Universe, then these structures may contain more than half of all the mass in the Universe.

The theory of the Big Bang predicts that variations in the density of matter in the very first moments of the Universe led the bulk of the matter in the cosmos to condense into a web of tangled filaments. This view is supported by computer simulations of cosmic evolution, which suggest that the Universe is structured like a web, with long filaments that connect to each other at the locations of massive galaxy clusters. However, these filaments, although vast, are made mainly of dark matter, which is incredibly difficult to observe.

The first convincing identification of a section of one of these filaments was made earlier this year. Now a team of astronomers has gone further by probing a filament’s structure in three dimensions. Seeing a filament in 3D eliminates many of the pitfalls that come from studying the flat image of such a structure.

“Filaments of the cosmic web are hugely extended and very diffuse, which makes them extremely difficult to detect, let alone study in 3D,” says Mathilde Jauzac (LAM, France and University of KwaZulu-Natal, South Africa), lead author of the study.

The team combined high resolution images of the region around the massive galaxy cluster MACS J0717.5+3745 (or MACS J0717 for short), taken using Hubble, NAOJ’s Subaru Telescope and the Canada-France-Hawaii Telescope, with spectroscopic data on the galaxies within it from the W. M. Keck Observatory and the Gemini Observatory. Analyzing these observations together gives a complete view of the shape of the filament as it extends out from the galaxy cluster almost along our line of sight.

First ingredient: A promising target. Theories of cosmic evolution suggest that galaxy clusters form where filaments of the cosmic web meet, with the filaments slowly funneling matter into the clusters. “From our earlier work on MACS J0717, we knew that this cluster is actively growing, and thus a prime target for a detailed study of the cosmic web,” explains co-author Harald Ebeling (University of Hawaii) who leads the team that discovered MACS J0717 almost a decade ago.

Second ingredient: Advanced gravitational lensing techniques. Albert Einstein’s famous theory of general relativity says that the path of light is bent when it passes through or near objects with a large mass. Filaments of the cosmic web are largely made up of dark matter which cannot be seen directly, but their mass is enough to bend the light and distort the images of galaxies in the background, in a process called gravitational lensing. The team has developed new tools to convert the image distortions into a mass map.

Third ingredient: High resolution images. Gravitational lensing is a subtle phenomenon, and studying it needs detailed images. Hubble observations let the team study the precise deformation in the shapes of numerous lensed galaxies. This in turn reveals where the hidden dark matter filament is located. “The challenge,” explains co-author Jean-Paul Kneib (LAM, France), “was to find a model of the cluster’s shape which fitted all the lensing features that we observed.”

Finally: Measurements of distances and motions. Hubble’s observations of the cluster give the best two-dimensional map yet of a filament, but to see its shape in 3D required additional observations. Spectroscopy from Keck and Gemini provides the line-of-sight velocity of the galaxies critical to placing the galaxies in 3-D. Multi-color images from Subaru and CFHT provide estimates for many other galaxies not studied by spectroscopy.

A model that combined positional and velocity information for all these galaxies was constructed and this then revealed the 3D shape and orientation of the filamentary structure. As a result, the team was able to measure the true properties of this elusive filamentary structure without the uncertainties and biases that come from projecting the structure onto two dimensions, as is common in such analyses.

The results obtained push the limits of predictions made by theoretical work and numerical simulations of the cosmic web. With a length of at least 60 million light-years, the MACS J0717 filament is extreme even on astronomical scales. And if its mass content as measured by the team can be taken to be representative of filaments near giant clusters, then these diffuse links between the nodes of the cosmic web may contain even more mass (in the form of dark matter) than theorists predicted. More than half of all the mass in the Universe may be hidden in these structures.

Future instruments such as the Keck Cosmic Web Imager (KCWI) are being designed specifically to study the low surface brightness filaments between clusters of galaxies. Due to be deployed in 2014 on the Keck II telescope, KCWI will provide further insight into the largest structures in the Universe, and how galaxy clusters and individual galaxies form and evolve over time.

The W. M. Keck Observatory operates two 10-meter optical/infrared telescopes on the summit of Mauna Kea on the Big Island of Hawaii. The twin telescopes feature a suite of advanced instruments including imagers, multi-object spectrographs, high-resolution spectrographs, integral-field spectroscopy and a world-leading laser guide star adaptive optics system. The Observatory is a private 501(c) 3 non-profit organization and a scientific partnership of the California Institute of Technology, the University of California and NASA.