Media release from W. M. Keck Observatory Kamuela, Hawaii – Watching active volcanic eruptions should be done from a safe distance, and a group of California researchers has figured out how to do it from, ironically, Mauna Kea – one of Earth’s tallest volcanoes – using the W. M. Keck Observatory. Employing an ingenious combination of […] 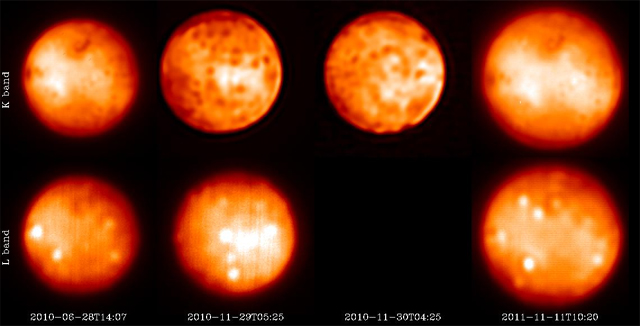 Kamuela, Hawaii – Watching active volcanic eruptions should be done from a safe distance, and a group of California researchers has figured out how to do it from, ironically, Mauna Kea – one of Earth’s tallest volcanoes – using the W. M. Keck Observatory. Employing an ingenious combination of telescopic surveys and archival data, they have gathered nearly 40 distinct snapshots of effusive (slow) volcanic eruptions and high temperature outbursts on Jupiter’s tiny moon, Io, showing details as small as 100 km (60 miles) on the moon’s surface.

While space-based telescopes were once required for viewing surface details on Io – similar in size to our Moon, but more than 1,600 times distant – adaptive optics (AO), pioneered at Keck, allows teams like that led by Franck Marchis, a researcher at the Carl Sagan Center of the SETI Institute, to collect fascinating data on the wild show from Earth. Marchis presented results from ground-based telescopic monitoring of Io’s volcanic activity over the past decade this week, at the 2012 Division of Planetary Sciences Meeting of the American Astronomical Society.

Erupting volcanoes on Io cannot be seen well from beneath the Earth’s atmosphere using classical astronomical techniques. Io is a relatively small satellite with a 3,600 km diameter, more than 630 million kilometers away. In 1979, Voyager 1 visited the Jovian system, revealing Io’s dynamic volcanic activity from the first close-up pictures of its surface, capturing bizarre volcanic terrains, active plumes and hot spots. The Galileo spacecraft remained in orbit in the Jovian system from 1995 to 2003 and observed more than 160 active volcanoes and a broad range of eruption styles. Several outstanding questions remained in the post-Galileo era, and the origin and long-term evolution of Io’s volcanic activity is still not fully understood.

In the meantime, astronomers designed instruments to break the “seeing barrier” and improve the image quality of ground-based telescopes. The blurring (“seeing”) introduced by the constant motion of the Earth’s atmosphere can be measured and corrected in real time using adaptive optics (AO), providing an image with a resolution close to the theoretical “diffraction limit” of the telescope. The W. M. Keck Observatory has used adaptive optics since 1999.

“Since our first observation of Io in 2001 using the Keck II 10-meter telescope and its AO system from Mauna Kea in Hawaii, our group became very excited about the technology. We also began using AO at the Very Large Telescope in Chile, and at the Gemini North telescope in Hawaii. The technology has improved over the years, and the image quality and usefulness of these AO systems have made them part of the essential instrument suite for large telescopes,” said Marchis.

Since 2003, combining their own observing programs with archival data, the team led by Marchis has gathered approximately 40 epochs of observations of Io in the near-infrared. These images show details as small as 100 km (60 miles) on the surface of the satellite.

Their observations have revealed young and energetic eruptions called outbursts. These are easily detectable from their immense thermal emission at shorter wavelengths, implying a high eruption temperature. The team observed the awakening of the volcano Tvashtar simultaneously with the New Horizons spacecraft, which flew past Jupiter on its way to Pluto. From a combined survey based on three large telescopes, they reported that the eruption was detectable from April 2006 to September 2007. Older observations from the Galileo spacecraft and the W. M. Keck Observatory show that this volcano previously displayed a similar “fire fountain” eruption which started in November 1999 and lasted for 15 months. Similarly, Pillan, an energetic eruption detected with the Galileo spacecraft from 1996 to 1999, had sporadic activity again in August 2007 that was reported by the team using the Keck II telescope.

“The episodicity of these volcanoes points to a regular recharge of magma storage chambers” said Ashley Davies a volcanologist at the Jet Propulsion Laboratory, California Institute of Technology, and a member of the study. “This will allow us to model the eruption process and understand how heat is removed from Io’s deep interior by this particular style of volcanic activity.”

Four additional young eruptions were detected during this survey including an extremely active volcano located at a region that had never shown activity in the past. The new activity was seen in May 2004 and had a total output of 10% the average Io thermal output. This was more energetic than Tvashtar in 2001, implying a fire fountain style eruption. Interestingly, the team did not observe any “mega-outburst” during this survey, with an energetic output similar to the eruption on Surt in 2001, the most energetic eruption ever witnessed in the Solar System. They conclude that such outbursts are rare and short-lived, typically lasting only a few days.

The team and several others groups continued to monitor Io’s volcanic activity. They noticed that since September 2010, Io’s volcanic activity has been globally quiescent. A dozen permanent, low temperature eruptions, which represent less dramatic “effusive” activity, are still detected across the surface of Io, but recent observations of the satellite show an absence of young bright eruptions.

“Spacecraft have only been able to capture fleeting glimpses of Io’s volcanoes, Voyager for a few months, Galileo a few years, and New Horizons a few days. Ground-based observations, on the other hand, can continue to monitor Io’s volcanoes over long time-scales. The more telescopes looking at Io, the better time coverage we can obtain,” said Julie Rathbun from Redlands University, a planetary scientist not directly involved in this study but who has monitored Io for more than 15 years.. “AO observations from 8- to 10-meter class telescopes are a dramatic improvement in spatial resolution over previous ground-based observations. Soon they will not only be our only way to monitor Io’s volcanoes, but the best way. We should be making these observations more often.”

The monitoring of Io’s volcanism will continue to build a timeline of activity and thermal emission variability, which will be further complemented by data obtained by other missions to the Jupiter system (such as the ESA mission JUICE, or a future dedicated Europa or Io mission). Until these missions, however, the large, AO-enabled ground-based telescopes will shoulder the task of monitoring Io’s volcanic activity.

The next generation of AO systems will provide even better image quality and open the visible wavelength range to planetary astronomers. These systems are currently under development and will have their first light in the coming years. Colorful surface changes due to volcanic activity, such as plume deposits or lava flow fields, will be detectable from the ground.

“The understanding and characterization of volcanoes on Io is one of the many very exciting applications of the current Keck AO systems,” said Peter Wizinowich, Optical Systems Manager at W. M Keck Observatory. “Marchis’ simulations of what Keck’s proposed Next Generation AO system (NGAO) could do for the field of solar system astronomy remind us that there is a lot more breakthrough science awaiting the delivery of NGAO.”

The W. M. Keck Observatory operates two, 10-meter optical/infrared telescopes on the summit of Mauna Kea on the Island of Hawaii. The twin telescopes feature a suite of advanced instruments including imagers, multi-object spectrographs, high-resolution spectrographs, integral-field spectroscopy and a world-leading laser guide star adaptive optics system. The Observatory is a private 501(c) 3 non-profit organization and a scientific partnership of the California Institute of Technology, the University of California and NASA.

IMAGE ABOVE:  Quiescent activity of Io observed in 2010 and 2011 showing several quasi-permanent eruptions at 3.8 microns [bottom] and the absence of bright, hotter outbursts at 2.1 microns [top].