Video courtesy Hawaii County Office of the Mayor, Voice of Stephanie Salazar WAIKOLOA VILLAGE, Hawaii: The County of Hawaii will soon begin sales of homes in the Kamakoa Nui workforce housing community in Waikoloa. The announcement was made on Thursday, after Mayor Billy Kenoi toured the properties with administration officials. “Families will have an opportunity […] 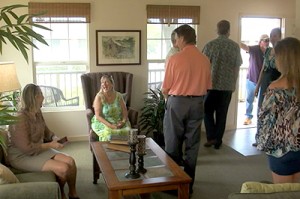 WAIKOLOA VILLAGE, Hawaii: The County of Hawaii will soon begin sales of homes in the Kamakoa Nui workforce housing community in Waikoloa.

The announcement was made on Thursday, after Mayor Billy Kenoi toured the properties with administration officials.

“Families will have an opportunity to build equity for their families, for their future,” said Mayor Billy Kenoi. “It becomes a wiser investment for all of us, and more importantly, it’s an investment in our children and their future.”

The project has been mired in litigation between the county and Unidev LLC, the original developer, for years. It was only this past Monday that title to the property was cleared, giving the county the green light to offer the homes for sale.

The Office of Housing and Community Development will begin offering new fee-simple homes to qualified buyers at price points between $235,000 and $350,000. The county says there are no additional costs to ownership such as homeowner’s association dues or community facilities charges. OHCD plans to ask for bids on the first three phases of the project — about 20 homes — by December 2012.

Good news for Larry Denis, a Waikoloa Elementary School teacher who was at today’s announcement and walk-through. “I’m excited to look at the options,” Denis told officials.

Homes at Kamakoa Nui are being offered to resident families with household incomes of no more than 140 percent of the area median income. For a family of four, that comes out to $97,440.

The county says Habitat For Humanity will also purchase four lots at Kamakoa Nui, allowing families with even lower average monthly incomes to be able to afford homes.

That wasn’t the only big news for Waikoloa Village on Thursday. Mayor Kenoi also announced that the first phase of the Paniolo  Avenue extension project is expected to be out to bid in December. The $3 million dollar project phase could be completed as early as the first quarter of 2014. The extension of Paniolo Avenue, from the traffic light near Waikoloa Elementary School to Kamakoa Nui, will create the primary entrance to the community and the park, lessening the impact to those living on Iwikuamo‘o Drive.

“We’re building the road because the community needs it. Although the obligation to construct the road rests with others, we cannot wait for them to resolve who will build it,” said Mayor Kenoi. “So we will build it.”