by David Corrigan, voice of Stephanie Salazar PUAKO, Hawaii – The President of Palau – the island nation in the western Pacific – spoke to a crowd in Puako on Monday night. Thomas Remengesau, whose country is a part of the Micronesia island group – paid a visit to Hokuloa Church. It was the final […] 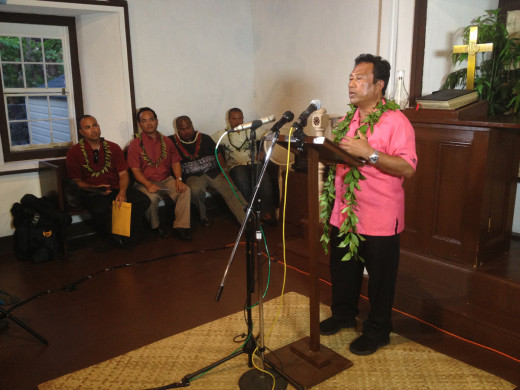 PUAKO, Hawaii – The President of Palau – the island nation in the western Pacific – spoke to a crowd in Puako on Monday night.

Thomas Remengesau, whose country is a part of the Micronesia island group – paid a visit to Hokuloa Church. It was the final leg of a state-wide tour.

The president talked to the Kohala Coast community about his country’s balancing of natural resource conservation with cultural preservation with sustainable economic development. It is a tension that Hawaii knows well.

According to the Nature Conservancy – which helped arrange the visit – Rememgesau is recognized as a global leader, “maintaining Palau’s presence at the United Nations and advocating to minimize the impacts of climate change in island nations across the Pacific”. Time magazine chose him as one of their 2007 Heroes of the Environment.

In his 20 minute address in Puako, President Remengesau shared lessons learned from the “Micronesia Challenge”, which has inspired other islands around the world.

Proof that Palau practices what it preaches from an administrative standpoint: Remengesau traveled to Hawaii with a delegation that included his newly appointed Minister for Natural Resources, Environment and Tourism… an all in one position that has no equal in Hawaiian bureaucracy.

The Nature Conservancy says Palau is an archipelago of 340 islands located 600 miles east of the Philippines. Its waters are among the richest in the world, containing more hundreds of coral species and nearly 1,300 varieties of reef fish. But as an Underwater Wonder of the World, Palau’s resources attract fisheries and tourism. Over time, those resources began to decline.

The president signed into law a total ban on shark finning and declared all of their waters a shark sanctuary. The nation also put a stop to deep-sea bottom trawling and the live reef fish trade.

After his speech, Remengesau took questions from the audience. The first came from the Hawaii State Representative of the district, Cindy Evans.

The Nature Conservancy says the presidential visit is part of an ongoing Hawai’i-Palau learning exchange. “In February 2012,” TNC says they, “sponsored 27 community members and government officials from Hawai’i to visit Palau for a learning exchange. The previous year, a delegation from Palau came to Hawai’i and one outcome of that trip was a decision to stop the import of goats to that island nation. Remengesau also has ties to the Polynesian Voyaging Society; he sailed with the crew from Yap to Palau in 2007.”