HAWAII – Large, predatory fishes from the offshore waters around Hawai‘i have been ingesting a surprisingly large amount of plastic and other marine debris, according to new research by scientists at the University of Hawai‘i at Mānoa. These observations are the first of their kind in scope and in number, and they suggest that more […]

HAWAII – Large, predatory fishes from the offshore waters around Hawai‘i have been ingesting a surprisingly large amount of plastic and other marine debris, according to new research by scientists at the University of Hawai‘i at Mānoa. These observations are the first of their kind in scope and in number, and they suggest that more attention should be given to marine debris in subsurface waters, as well as to the potential food web implications for human consumption.

Over a six-year period, researchers investigated the stomach contents of 595 fish representing 10 predatory open-ocean species, including commercially valuable tunas and billfishes. Seven of the 10 species were found have ingested some form of debris, with varying degrees of frequency. 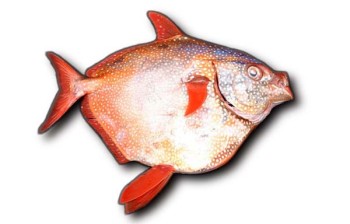 “One of the species we looked at is opah, or the moonfish (Lampris guttatus), a delectable and popular fish consumed in Hawai‘i and around the world,” said Anela Choy, a UH Mānoa graduate student and lead author of the study, which was recently published in the scientific journal Marine Ecology Progress Series. “In the two species found in Hawaiian waters, 58 percent of the small-eye opah and 43 percent of the big-eye opah had ingested some kind of debris. This was based on looking into the stomachs of almost 140 opah.

“Another large fish species, the longnosed lancetfish (Alepisaurus ferox), had a 30 percent debris ingestion incidence,” continued Choy. “Although this is not a species consumed by humans, it is a very common fish in open ocean waters globally and is very frequently caught by fisherman around Hawai‘i.”

The study was based on observations collected during multiyear diet studies, the primary objective of which was to describe food habits and trophic ecology of large fish species in the region, according to Choy and her co-author Jeff Drazen, an associate professor in the Oceanography Department of UH Mānoa’s School of Ocean and Earth Sciences and Technology (SOEST).

From sea birds to turtles to small fish, and even to bottom-dwelling echinoderms like sea cucumbers, many types of marine animals are known to ingest marine debris. Still, despite the prevalence of studies documenting the environmental implications of plastic debris in the world’s oceans, there have been few reports of plastic ingestion by large marine fishes.

“What was most surprising was that the fish that most frequently ingested debris are all thought to be deeper water species, generally those that live beneath the sunlit upper 500 to 600 feet of the water column,” Choy said. “Deeper water fishes may have been coming up close to the surface to ingest debris, which is an unusual and unexpected behavior.” 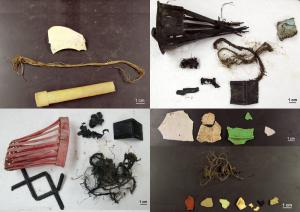 Or the debris could be coming to them. Buoyant plastics are known to sink into the deep ocean when waterlogged or perhaps weighted down by algae or encrusted by small sea animals. Wind-driven ocean mixing or water currents could also possibly transport debris to deeper waters.

The effects of plastic ingestion on the health of these predatory fishes remain uncertain. Researchers don’t know how long debris stays in the stomachs of large fishes, or whether they are able to pass such debris. Many plastics are known to absorb or take up PCBs, organochlorine pesticides, metals, and petroleum hydrocarbons from sea water. However, it is not known whether the toxins are transmitted to the fish that consumes the plastic, or ultimately to humans who consume the fish.