PUNA, Hawaii – Its been nearly five months since hundreds gathered outside the Hawaii Electric Light Company’s headquarters in Hilo, shouting to the power utility executives inside to “Save Pohoiki” from geothermal development. In August, those opposed to the industry’s expansion in Puna marched all the way into town from Pahoa over the course of […]

PUNA, Hawaii – Its been nearly five months since hundreds gathered outside the Hawaii Electric Light Company’s headquarters in Hilo, shouting to the power utility executives inside to “Save Pohoiki” from geothermal development. In August, those opposed to the industry’s expansion in Puna marched all the way into town from Pahoa over the course of three days. The journey culminated in the delivery of a petition to HELCO president Jay Ignacio, demanding the utility stop its contract for new geothermal development on the Island of Hawaii.

Robert Petricci is one resident who has lived with the geothermal industry in his backyard, and he has documented the rocky start the industry has had on Hawaii Island. Long touted as an affordable, renewable answer to HELCO’s expensive reliance on fossil fuels, a large number living in Puna say the industry has fallen short of expectations in many ways. But as energy prices continue to climb, others on the island say geothermal is worth another chance. New technologies and new companies, they say, are ready to finally make geothermal the clean and cheap energy source it has long promised to be.

Right now, only one company is producing energy from the geothermal resource and selling it to HELCO. Puna Geothermal Venture – owned by the company Ormat – is located near Pohoiki, on the geologically active east rift zone of Kilauea volcano. It provides 38 megawatts of power to consumers on the Big Island grid.

A few years ago, a renewed push began with plans to develop an additional geothermal supply. A working group was formed. The findings favored expansion. Supporters of the industry like Richard Ha, a farmer and co-chair of the working group, began the conversation, and campaign, to increase geothermal production. Lawmakers got on board, and promised to pave the way by easing environmental regulations to hasten development. A number of laws were passed that circumvented safeguards, stirring Puna’s population to action.

The debate became politically charges during the election year. But by the time the campaign dust settled, an independent fact finding study group had been formed, tasked with creating a Geothermal Public Health Assessment. However, by that time HELCO had gotten on board with the call for more geothermal. In February of 2013, the utility issued a Request for Proposals, seeking to add up to 50 more megawatts from developers. The prices would not be tied to the cost of oil to help lower electricity costs for customers.

Puna’s people took to the streets. By then the draft of the Geothermal Public Health Assessment had been completed, and demonstrators came armed with the findings. The document stated that Puna’s public health profile is unclear in the shadow of the industry, and that health studies are needed.

The document recommended that the county undertake a comprehensive health effects study, conduct a meta-analysis of hydrogen sulfide, and establish a better monitoring system. It also said the county should evaluate geothermal effects on drinking water and the near-shore ocean environment.

The results of the working group became Puna’s chief argument for a delay in awarding the RFP. We spoke to HELCO president Ignacio immediately after the demonstration.

For months there was no decision. Then in December, news broke that HELCO was reconsidering its RFP. The notice on the HELCO website read:

After careful review of all geothermal bids, Hawaii Electric Light has determined that none of the submitted bids sufficiently met both the low-cost and technical requirements of the Geothermal RFP. We are currently working with the Independent Observer to develop a request that will be sent to the bidders. The request will give the bidders the opportunity to provide additional information so that we can make an informed decision that is in the best interests of our customers and residents and that meets the goals of the Geothermal RFP. These goals include lowering customer bills, reducing our dependence on fossil fuels, allowing for continued integration and management of intermittent renewable resources, maintaining reliability of service, and protecting the health and safety of the public and environment. We appreciate the efforts the bidders have made to date and look forward to working with them and the Independent Observer on next steps.HELCO website, Dec. 20 2013

Petricci saw the news as a victory, calling it “a win for decentralized, dispersed, and truly renewable power.” 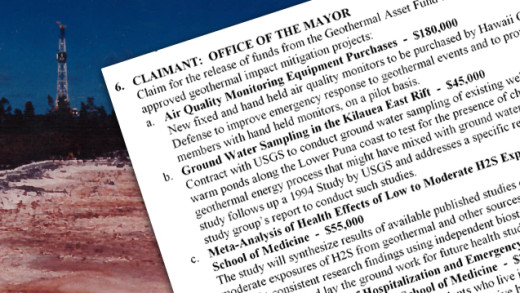 And we haven’t heard the last of the Geothermal Public Health Assessment, either. This week Thursday, the Windward Planning Commission will be presented with an overview of the assessment, and will also consider a request from the mayor to release money from the Geothermal Asset Fund in order to implement some of the findings.

$180,000 is being requested to purchase Air Quality Monitoring Equipment – both fixed and handheld – for the Hawaii County Civil Defense emergency responders and members of the community, on a pilot basis.

$45,000 is being requested to conduct ground water sampling in the Kilauea East Rift Zone. The county plans to contract with the USGS to test certain wells and warm ponds for the presence of chemicals used in the geothermal energy process that might have mixed with groundwater in the region.

$55,000 is being requested for an Analysis of Health Effects of Low to Moderate H2S Exposure, conducted by the John A Burns School of Medicine. The analysis will hopefully lay the groundwork for future health studies in the Puna Region.

$27,500 will be needed to do a comparative Analysis of Hospitalization and Emergency Department visits for Puna Residents

And finally, $25,000 is needed to conduct an Enhanced Level 1 Environmental Site Assessment on the former HGP-A brinewater pond sites, to see if there are any hazardous materials that may be in the ground as a result of the early years of geothermal development.

The commission meets at at 9:00 am on Thursday January 9, in the Aupuni Center Conference Room at 101 Pauahi Street.