HILO, Hawaii – The Kailua-Kona community is hoping to expand the public area near the popular Magic Sands beach park.

The White Sands Mauka property is listed as a key priority for purchase in the 2013 Annual Report of the Public Access, Open Space, and Natural Resources Preservation Commission. Now, Councilman Dru Kanuha is initiating the necessary council approval for the county to negotiate for the purchase of the land.

“I’m working with the Kipapa ohana who previously owned Pahoehoe, and this land,” said Kanuha during a Finance Committee meeting on Monday. “They are doing an excellent job currently at the Kipapa Park. They’ve taken it on as an ohana as their kuleana to take care of it. This would be a great expansion to that park.” 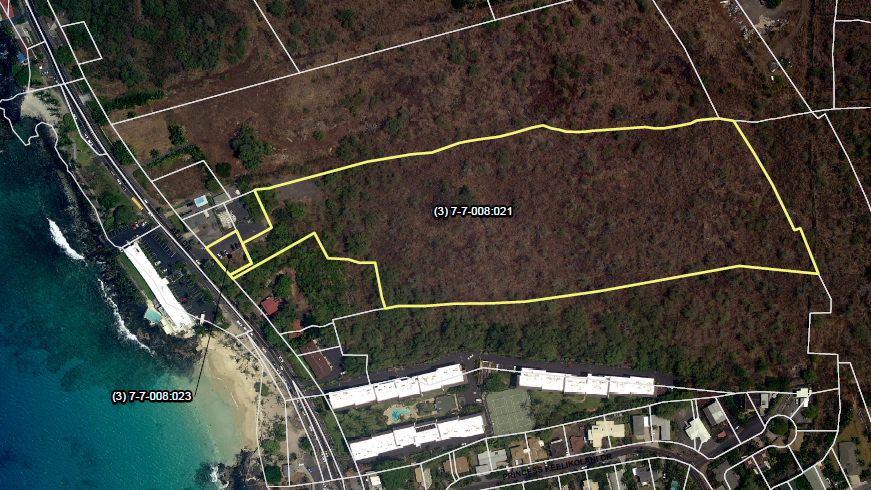 “This goes from Alii Drive,” Kanuha continued, “all the way on the mauka side to the proposed Alii Parkway. This could potentially connect a lot of different subdivisions to this park.”

County Property Manager Ken Van Bergen said time could be of the essence with the White Sands parcel.

“It was foreclosed upon two years ago,” Van Bergen told the Finance Committee. “So its bank owned at this point. A bank out of France. We are talking to the asset manager out of New York. Not for acquisition but just an information gathering. They know it is on the list They know that there might be – upon your approval – an interest in the property. It is zoned for 120 units already, so as the market continues to get better in Kona and throughout the state, it will be more attractive to developers to buy this parcel and go with that already-approved 120 condo zoning that it has. Its a good location for that.”

Van Bergen said Alan Haun has already done an archaeological survey of the area and there is a lot there to protect from a cultural standpoint. He said the lower part is “nice and flat” and could be used for park expansion.

From the 2013 PONC report to the mayor

Public outdoor recreation and education, serving what continues to be one of the most densely populated areas on the Big Island

Expansion of the recently acquired Kipapa Park properties by the County of Hawai‘i, turning it into a combined 15-acre recreation area suitable for walking, biking, jogging, picnics and parking

Public purchase would provide a buffer between development and these areas, which could be explored for educational and cultural preservation purposes

This 10-acre property was listed for $2.75 million, but was temporarily taken off the market. It is owned by the French bank BNP Paribas, which acquired it in 2012 through a foreclosure action.

The property is zoned RM-3.5, it has been approved for a 120-unit condominium, and runs from Ali‘i Drive to the proposed Ali‘i Parkway right-of-wayPONC 2013 Report