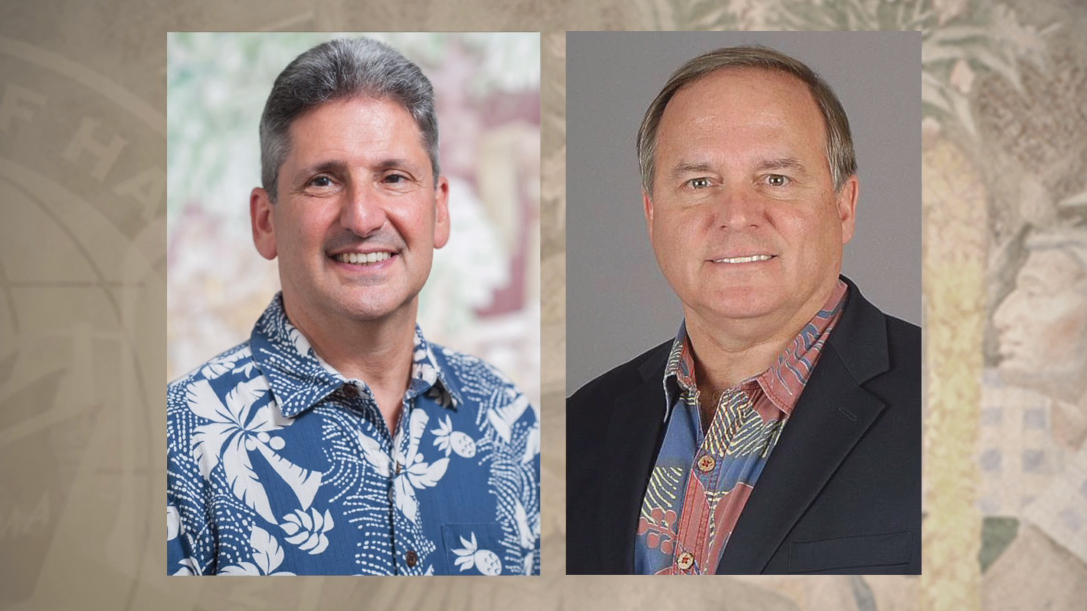 HILO, Hawaii – A series of public forums for the next University of Hawaii president wrapped up last week, and controversy followed one candidate to Hawaii Island.

Two finalists – current interim president David Lassner and Lt. General Francis Wiercinski – are vying for the position. The University of Hawaii System Board of Regents made the announcement last week.

The regents have had to explain why the search for the new UH president is limited to only two candidates.

“There’s been a focus on the number two,” said Board of Regent chair John Holzman. “What we’ve been focusing on is the quality of the candidates. There both really capable individuals.”

Now the public is getting to know the two candidates. David Lassner, who spoke at a public meeting at UH-Hilo on Friday morning, enjoys the advantage of already holding the position, temporarily.

Franics Wiercinski has a military background. He is a retired commanding general of the U.S. Army Pacific, and for that reason a large group in opposition to his candidacy attended his forum at the Hilo campus on Friday evening.

Many held signs decrying Wiercinski’s bid for the job. And many of the questions were also geared towards Wiercinski’s military connection.

“I make no excuse for that,” Wiercinski told the crowd. “I never will. To do that would be to deny 163 friends that I personally buried. And I would never dishonor them, their service, their parents, their spouses or their children. I’ve read some interesting things like: he’s gonna march students to class. He’ll be giving orders. At this level, that doesn’t happen. This is about finding solutions to problems. No one individual has the answers. It takes open and transparent communication to do that.”

Wiercinski’s military history was detailed in his resume, provided within the Presidential Selection Final Report

Leading consultant and managing partner of a Hawai‘i‐based, veteran‐owned, consulting firm focused on strategic engagement and strategic business development throughout the Indo‐Asia‐Pacific region to include Hawai‘i and Alaska. Utilizing a decade of experience and expertise throughout the region, coupled with existing personal relationships and cultural and historical knowledge, engaged in supporting future and ongoing business and partner development across a spectrum of industry and management opportunities throughout the entire region. Advising leaders on the unique blend of Asian and Pacific cultures, business opportunities, strategic planning and 34 years of military leadership experience.

Senior Army Commander in the Asia‐Pacific with the responsibility and welfare of a workforce of 16,000 civilians in addition to 86,000 soldiers and 78,000 family members, responsibility dispersed across 9,000 miles from India to the west coast of the U.S., managing multiple installations and billions of dollars of equipment and infrastructure. Managed an operating budget of $1 billion. Engaged on a daily basis with 36 partner nations and 27 chiefs of Army, ambassadors, foreign defense officials, U.S. Congress, U.S. interagency, non‐governmental organizations, and federal, state and local government officials. Provided trained and ready forces, command and control capabilities, and over 146 joint logistical functions for the Pacific Command.

Commanded all Army forces in Japan consisting of a 7,000‐member workforce spread over 16 installations with a budget of $400 million. Responsible for strategic planning and operations management with the Japanese ground self‐defense force commanders, communications and engagement with senior Japanese defense officials, U.S. Ambassador and JOINT force commanders, and the development, organization and implementation of an emergency response command and control organization.

Responsible to the commander for the operational management and day‐to‐day operations of the largest Army component command in the U.S. Army. Provided direction, guidance, supervision and oversight of infrastructure and installation management, IT systems, the well‐being of the force, supervision of a major transformation operation, and command and control of Homeland Defense operations to all U.S. states and territories in the Pacific.

Responsible to the commander for the deployment of 15,000 personnel and equipment to combat operations in Iraq, while simultaneously transforming the organization with modernization, tactics and command and control systems. Coordinated and led the infrastructure development structure in Northern Iraq, increased governance, economic development, and rule of law. Worked with five provincial governors for 15 months to include interagency partners, senior Iraqi leadership, U.S. Congressional delegations, and industry, in major efforts to improve all standards of Iraqi reconstruction.

Big Island Video News received numerous emails in opposition to Wiercinski getting the job. One such communication was a May 7th “letter to the editor” written by Williamson Chang, Professor of Law and member of the Faculty Senate, University of Hawaii at Manoa and Somerset Wong, Third Year Student Richardson School of Law.

Lt. General Frank Wiercinski is not qualified to serve as President of the University of Hawaii. At least not yet. He does not meet the minimum qualifications of the Board of Regents or the Executive Committee of Manoa Faculty Senate. He does not have a doctorate degree from a respected institution of higher learning. He would not receive tenure at Manoa nor does he have “five years or more” of successful leadership in higher education. This is disturbing: as President he would rule on every tenure and promotion application in the system. Perhaps he could be a candidate one day: he could obtain a doctorate in Management [possibly from Shidler] he could seek a professorship and work his way up the leadership ladder in the University. He is only 57 years old.

Moreover, as evident from his May 6th presentation, he does not seem to understand and meet other key job requirements. The President has a duty to “advance the University’s strategic commitment to Native Hawaiians, other indigenous persons [including Pacific Islanders] and under-represented people.” According to the Board, that duty includes making Manoa “a model indigenous serving institution, to include Malama aina and sustainability.Williamson Chang, Somerset Wong

The outspoken peace activist Jim Albertini attended the meeting in Hilo, and offered these thoughts afterwards:

I sat in the third row middle and there were at least a dozen others throughout the auditorium like myself, holding signs questioning and protesting the General seeking to be UH president. His presentation was awkward, disjointed and came through as a canned talk. He seemed nervous. He has no experience with the University of Hawaii and his 34 years in a military culture (including illegal wars in Iraq and Afghanistan) is not compatible with a university campus of free flowing exchange. Some of the signs we held said: UH pivot to peace, not militarism, No Trust ! No Job! Have You No Shame – Withdraw Your Name! Hawaiian Values Aloha ‘Aina — Military Out of UH and Hawaii, No More UARC, Military Culture is NOT UH Culture, General NOT Qualified, Get a generalist–Not a General, No Combat College and War degrees at UH, Killing & Education Don’t Mix, The Pen is Mightier than the sword -No General, Return Stolen Nation – U.S. Out, Demilitarize Hawaii and Respect Mauna Kea, No TMT Industry, General UH Insult, Wiercinski LLC – “Foreign Military Sales” Expertise, No Education Expertise, No General- No Drone UH, Protest is Not the Problem, Dissent is Not the Enemy.

It seems to me the General is the inside track choice of the business community who want to cash in on the U.S. military pivot to the pacific and Asia, drone war training, etc. With Dan Inouye now gone, they are looking for every opportunity to bring in military bucks.

It was clear the General is not well grounded in Hawaiian history of the overthrow. Frankly, it is insulting to have a General of the occupying power now seeking to become the president of the University of Hawaii, but he seems clueless to this insult.Jim Albertini