Lava spilled from a steaming ground crack on Friday, as the far end of June 27th lava flow reactivated.

(ABOVE PHOTO) The leading edge of the lava near the abandoned geothermal well site in the Wao Kele o Puna Forest Reserve (seen as the cleared area at left). This photo was taken Friday by the USGS Hawaiian Volcano Observatory.

PUNA, Hawaii – Lava spilled from a steaming ground crack on Friday, as the far end of June 27th lava flow reactivated. Civil Defense officials issued an audio alert Saturday morning saying there was no immediate of imminent threat to populated areas. The message said the flow was 1.4 miles from the eastern boundary of the Wao Kele o Puna Forest Reserve.

Scientists photographed the latest development in the north-eastward march of the June 27 lava flow, named for the date it began. They posted the images to the HVO website.

The steaming ground crack observed yesterday suggested that lava was close to the surface within the crack, and today lava in the crack reached the surface and began spilling out into the thick forest. The leading edge of the lava today was near the abandoned well site (cleared area at left). This farthest lava was about 11.9 km (7.4 miles) from the vent on Puʻu ʻŌʻō (visible on horizon) and 2.6 km (1.6 miles) from the eastern boundary of the Wao Kele o Puna forest reserve.USGS Hawaiian Volcano Observatory on Friday 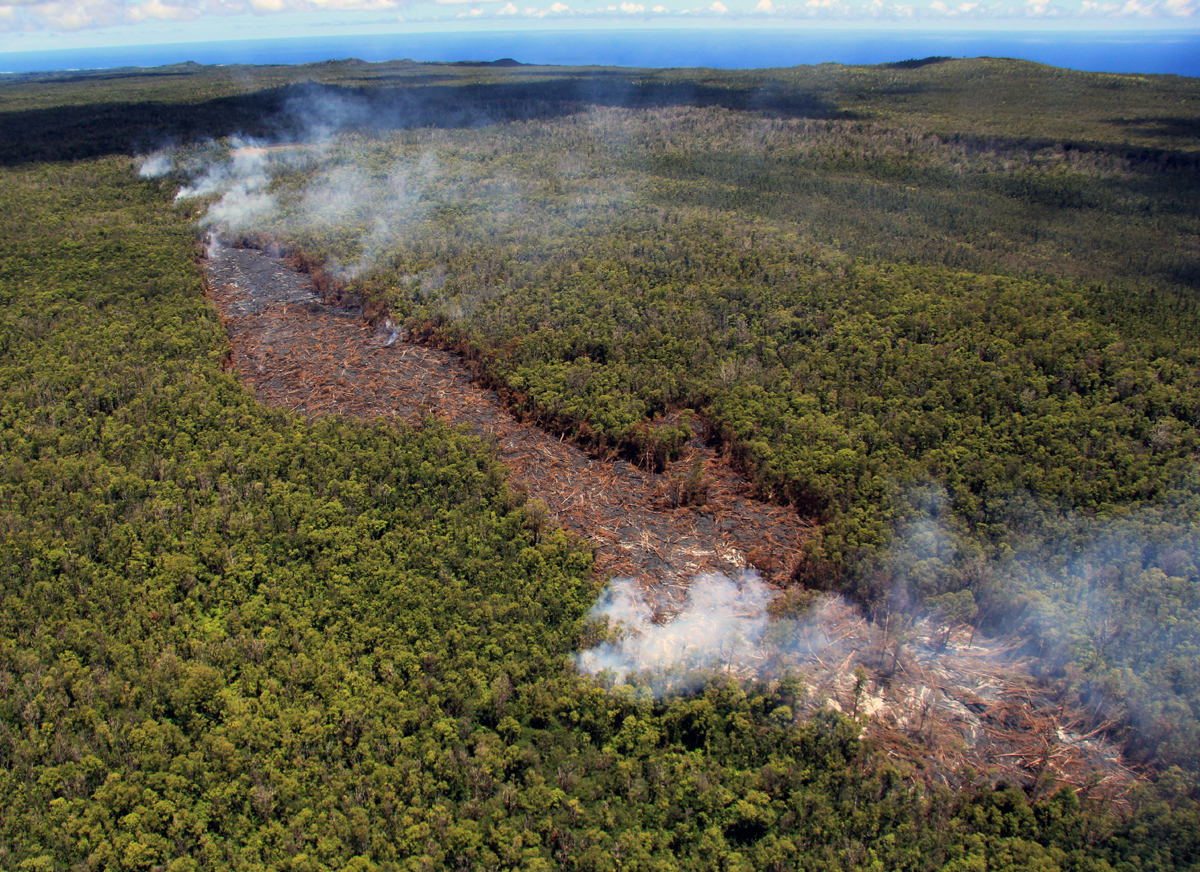 A closer view of the pad of lava that emerged from the ground crack earlier this week, which had renewed surface flows today. At the east end (upper left in photograph) of the lava pad new breakouts spilled into adjacent ground cracks, and lava was visible within the ground crack extending farther to the east (visible by line of smoke extending towards upper left portion of photo). Heiheiahulu is visible in the upper right. (USGS HVO) At the site of the isolated pad of lava near the leading edge of the June 27th flow, renewed surface flows today resurfaced the existing lava flow and also spilled into nearby ground cracks. In this photograph, two large streams of lava plunge into a crack that is a couple meters (yards) wide. (USGS HVO) 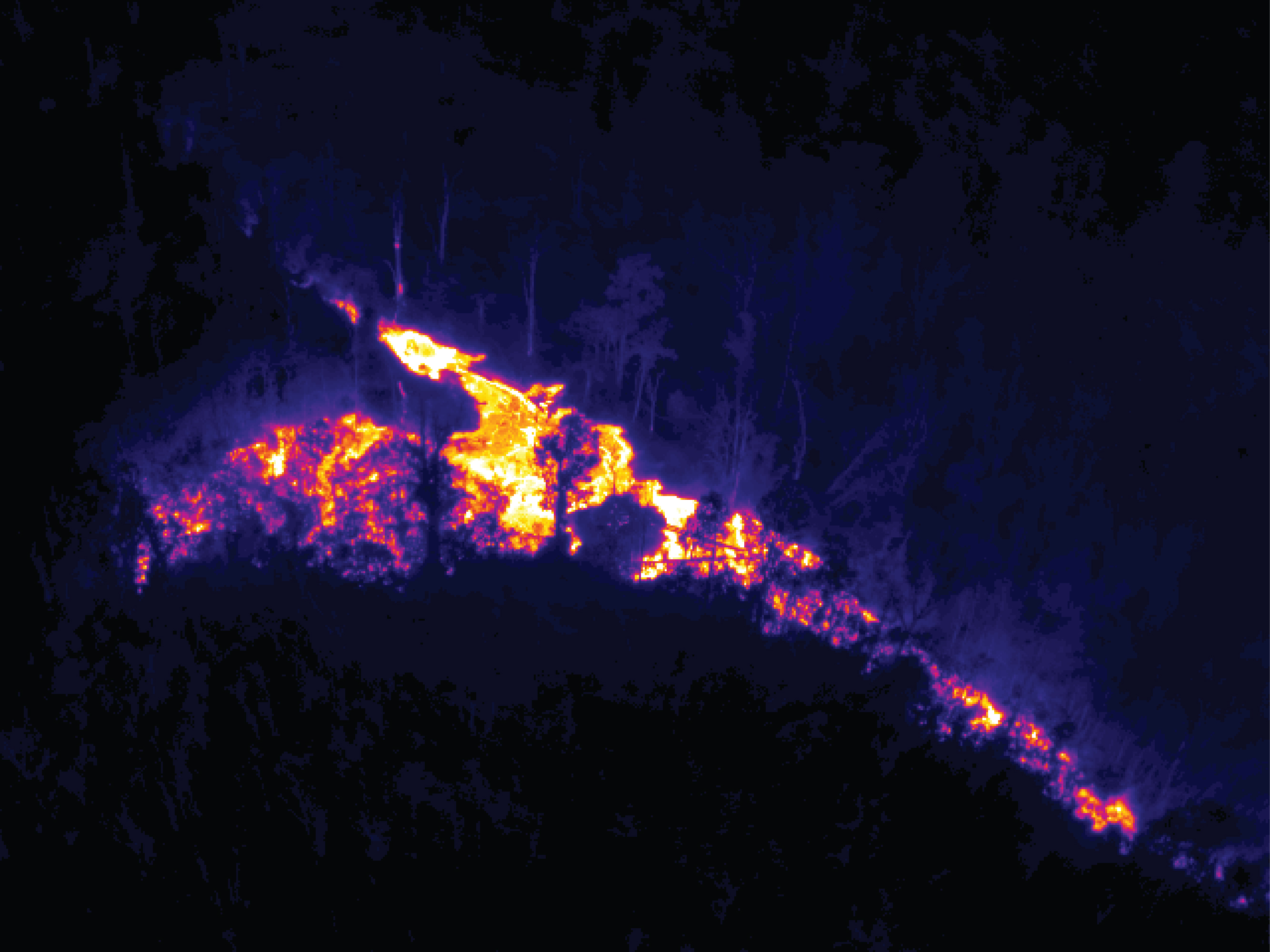 At the far end of the lava-filled crack, lava spilled out towards the north a very short distance. In this view from a thermal camera, the small lobe of lava moving north is easily visible. The trees surrounding the crack show brighter colors as they are heated by the lava flow, but not to the point of combustion. (USGS HVO)

Community meetings on the concerning lava flow will continue this week. Hawai’i County Civil Defense and the Hawaiian Volcano Observatory will host additional sessions on Tuesday, Sept. 2 and Thursday, Sept. 4 to update residents on the lava flow in the Wao Kele O Puna area. The briefings will begin at 6:30 p.m. on Tuesday and Thursday in the Pahoa High School Cafeteria.

To date, four meetings have been held at the Pāhoa Community Center to raise public awareness of the lava flow and to let potentially affected residents know how to stay informed about the flow’s progress. HCCDA also addressed the possible emergency-response measures that are being considered should the flow continue its northeastward advance.

During these meetings, HVO’s Scientist-in-Charge, Jim Kauahikaua, and HCCDA’s Director, Darryl Oliveira, provided brief presentations about the lava flow activity and emergency planning efforts, respectively, before answering dozens of questions from attendees. When and where the lava flow might reach specific communities, roads, and infrastructure were topmost among residents’ concerns, but are the most difficult questions to answer at this time.

While it’s true that lava flows travel downhill, their movement is more complex than might be expected. There are several critical factors that affect where lava actually flows and how quickly it advances.

For the June 27th lava flow, these include: (1) how much and how consistently lava is erupted from the Pu‘u ‘Ō‘ō vent; (2) whether or not lava breaks out of the tube and creates new surface flows (and tubes) that “steal” lava from the current flow front; and (3) the topography (shape and features) of the ground over which the lava is flowing, including slope steepness and direction, depressions, ground cracks, fault cliffs, craters, and cones.

During the past week, the most active part of the June 27th lava flow moved into extremely irregular topography with lots of cracks and depressions, which makes it futile—at this time—to forecast exactly which areas might be impacted.

The June 27th flow, named for when it began, is erupting from a vent located on the northeast flank of Pu‘u ‘Ō‘ō. The lava remained close to the vent for two weeks, but on July 10, the flow began to advance to the northeast, with an average speed of about 250 meters per day (820 ft/day), but as fast as about 500 meters per day (1,600 ft/day). These relatively rapid advance rates were likely due to two factors: a steady lava supply and confinement of the flow to a narrow low area between older lava flows.

This low area funneled the flow into a section of Kīlauea Volcano’s East Rift Zone that is marked by dozens of deep, discontinuous ground cracks and linear depressions that are hundreds to thousands of meters (yards) long. In mid-August, the lava flow disappeared into one of these cracks, creating uncertainty about if, when, and where it would reappear at the surface.

Over the following days, a line of rising steam along the crack suggested that lava was continuing to advance. On August 24, the flow resurfaced about 1.3 km (0.8 mile) farther down the rift zone, where, after forming a small pad of visible lava, the flow again cascaded into another crack and disappeared from view. As of August 29, a new line of steam progressing farther east along the crack indicated that lava continues to advance.

The irregular topography of the rift zone has kept the lava flow moving toward the northeast. But, as long as the lava continues to travel out of view within ground cracks, forecasting a precise flow path will remain difficult.

At the time of this writing (August 29), the June 27th lava flow did not pose an immediate threat to any residential area. However, HVO and HCCDA continue to closely track the flow with daily overflights of the area, which will continue as long as warranted.

We encourage you to stay informed about the flow. Daily eruption updates are posted on the HVO website (http://hvo.wr.usgs.gov) every morning, and maps and photographs of the flow are added after each HVO overflight.USGS Hawaiian Volcano Observatory Volcano Watch 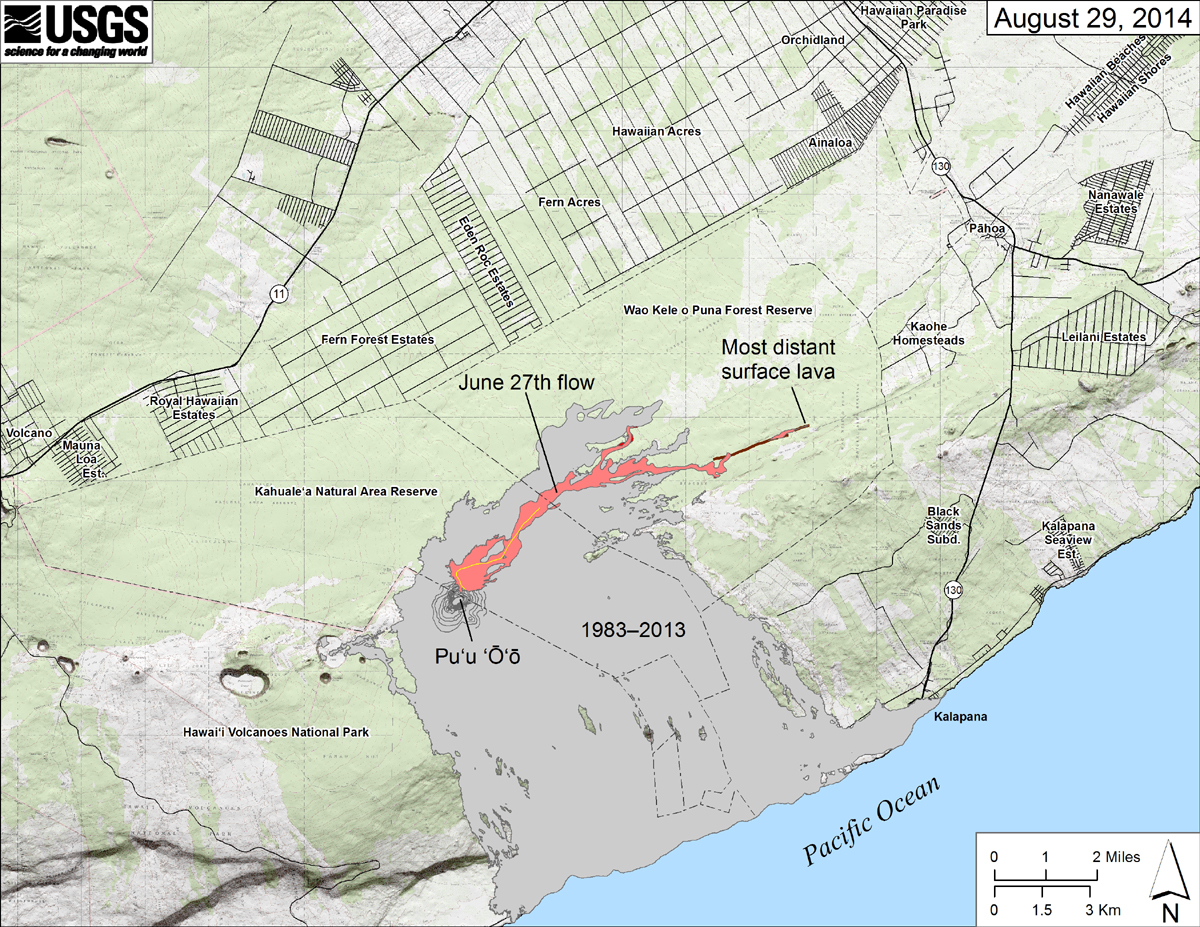 Map showing the June 27th flow in Kīlauea’s East Rift Zone as of August 29, 2014. The area of the flow as mapped on August 28 is shown in pink, while widening and advancement of the flow as of August 29 is shown in red. All older lava flows (1983–2014) are shown in gray. The thin yellow line marks a portion of the lava tube feeding the flow. The brown line at the far end of the flow marks the ground crack that has channeled lava to the east. Over the past day, lava has emerged from this ground crack with a small amount spilling onto the surface. The farthest reach of this lava, marked on the map, was 11.9 km (7.4 miles) from the vent and 2.6 km (1.6 miles) from east boundary of the Wao Kele o Puna Forest Reserve. (USGS HVO) 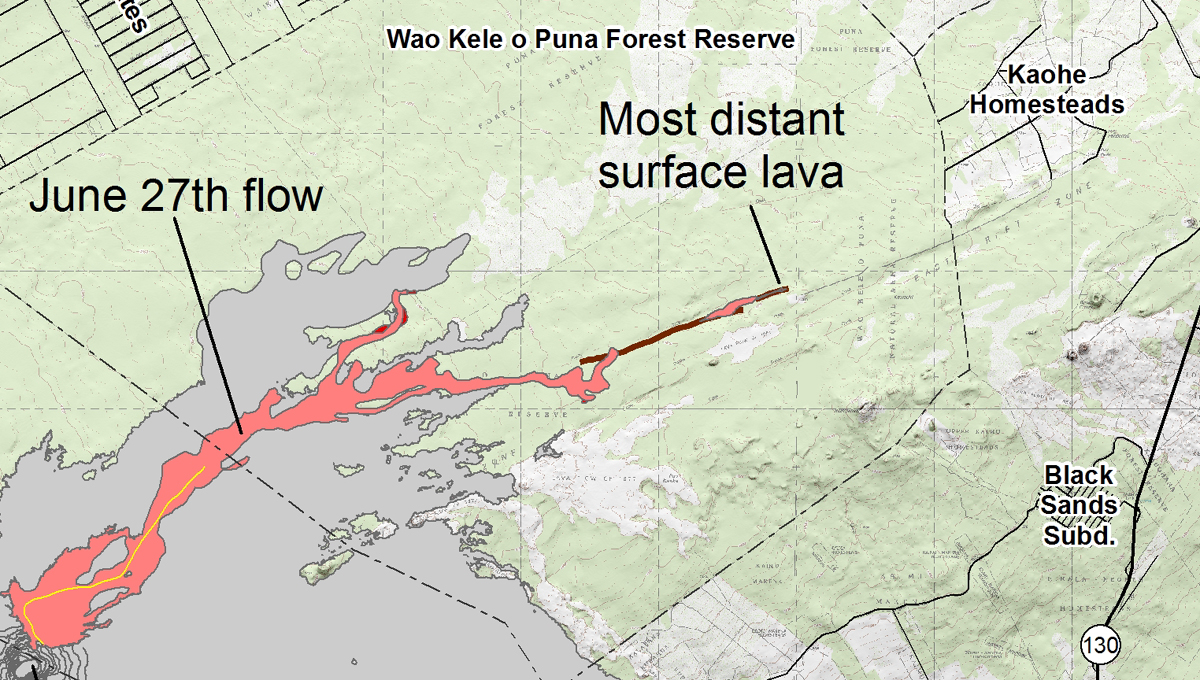