The future outlook for Kaohe Homesteads took a turn for the worse on Wednesday, as the advancing lava again headed northeast.

(ABOVE PHOTO) Smoke plumes indicate the location of the June 27th lava flow, which was less than half a mile from the edge of Kaohe Homesteads, visible in foreground, on September 10. The flow was advancing toward the northeast.

(ABOVE VIDEO) Residents of Puna ask various questions of Hawaii County emergency officials during a public meeting in Pahoa on Tuesday night.

PUNA, Hawaii – The future outlook for Kaohe Homesteads took a turn for the worse on Wednesday, as the advancing June 27 lava flow began heading northeast after a few days of northward movement. Hopes were alive for the rural subdivision on the outskirts of Pahoa town a few days ago as the lava front seemed to be taking a course parallel to the border between Kaohe and the Wao Kele o Puna Forest Reserve.

On Wednesday evening, however, a new set of USGS Hawaiian Volcano Observatory maps revealed the slight change in direction that could spell doom for the homesteads in less than two days. Scientists released a new Volcanic Activity Notice at 7:21 p.m.

Between September 6 and 10, the June 27th flow advanced north then northeastward at an average rate of 400 m/d (0.25 mi/d). In this way, the flow had advanced approximately 14.5 km (9.0 miles straight-line distance) from the vent, or to within 0.6 km (0.4 miles) of the eastern boundary of the Wao Kele o Puna Forest Reserve, by the afternoon of September 10. At the average rate of advancement of 400 m/day (0.25 mi/day) since September 6, we project that lava could flow from its current location to the northwest edge of Kaohe Homesteads in 1.5 days and to the Pāhoa Village road (government road) in Pāhoa within 14-16 days if lava is not further confined within the cracks and down-dropped blocks within the East Rift Zone of Kīlauea volcano. These estimates will be continually refined as we track this lava flow.USGS Hawaiian Volcano Observatory on Sept. 10

New maps were also issued and posted to the USGS website on Wednesday. 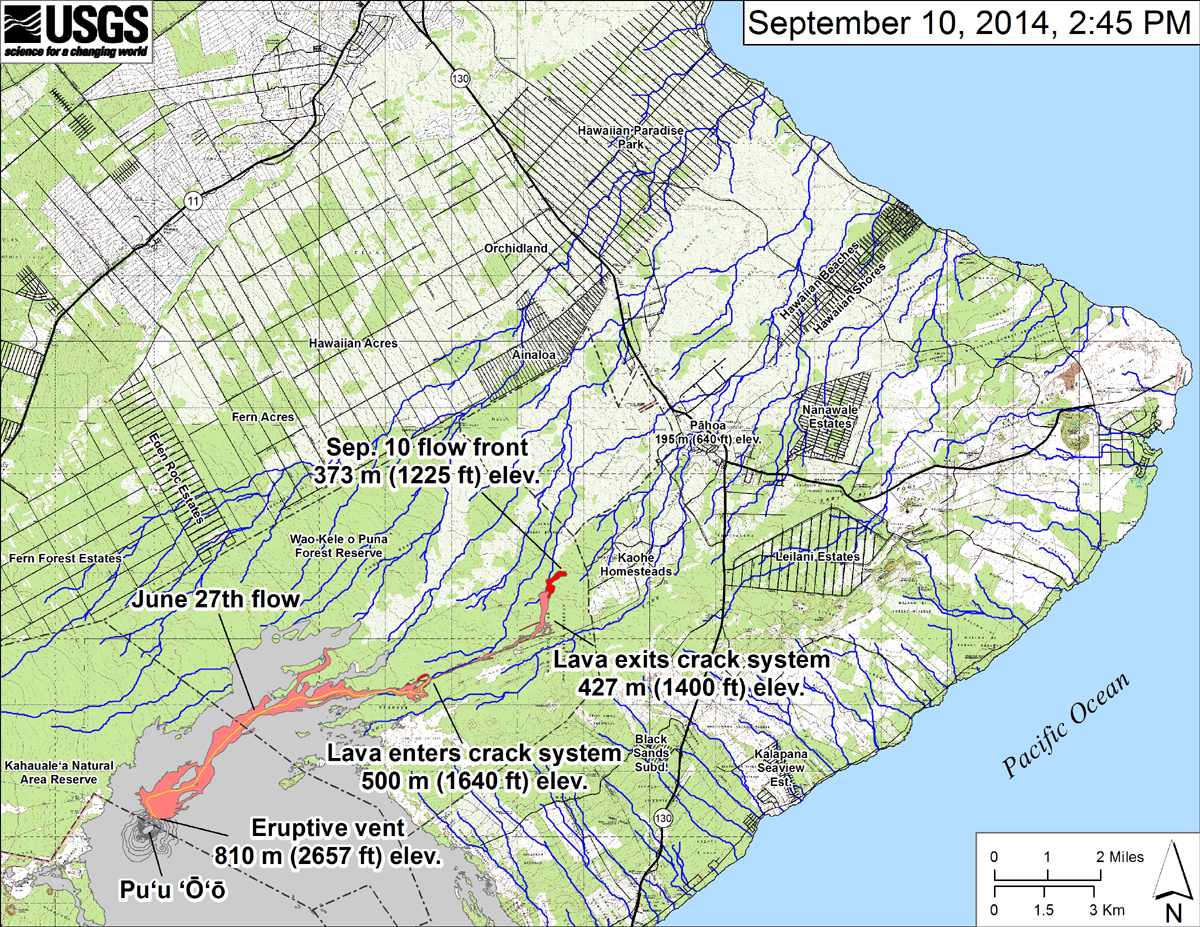 New USGS HVO map: “This small-scale map shows the June 27th flow in Kīlauea’s East Rift Zone on September 10, 2014.” write scientists. “The area of the flow on September 8, 2014, at 12:45 PM is shown in pink, while widening and advancement of the flow as mapped on September 10 at 2:45 PM is shown in red. The front of the active flow was 14.5 km (9.0 miles; straight-line distance) from the vent and 0.6 km (0.4 miles) from the east boundary of the Wao Kele o Puna Forest Reserve. The actual length of the flow, measured along the lava tube axis (so that bends in the flow are considered) is 16.6 km (10.3 miles). The flow was advancing toward the northeast. The blue lines show down-slope paths calculated from a 1983 digital elevation model (DEM). For an explanation of down-slope path calculations, see: http://pubs.usgs.gov/of/2007/1264/. All older Puʻu ʻŌʻō lava flows (1983–2014) are shown in gray; the yellow line marks the lava tube.” 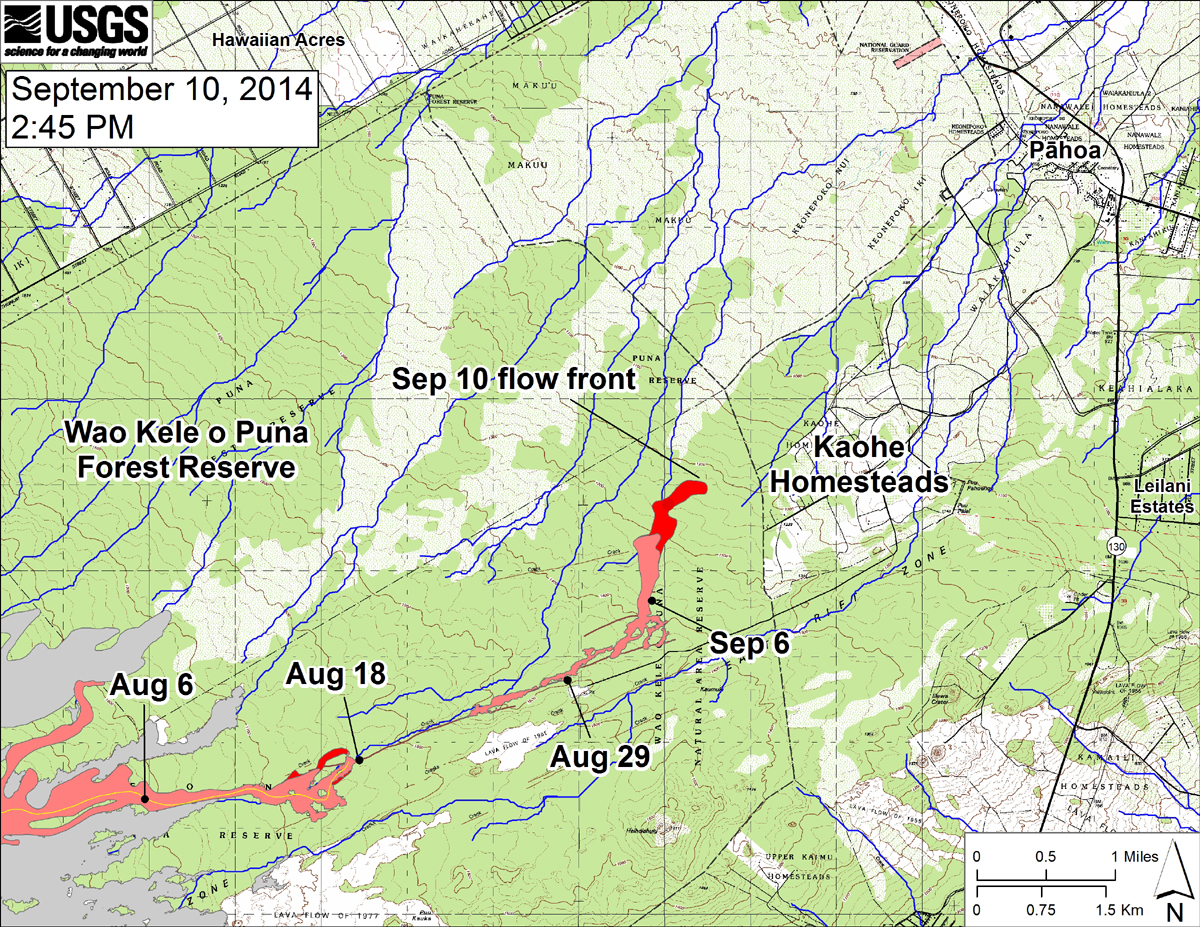 According to USGS, “This large-scale map shows the distal part of the June 27th flow in relation to nearby Puna communities. The black dots mark the flow front on specific dates. The latitude and longitude of the flow front on September 8 was 19.460895/-154.986613 (Decimal degrees; WGS84). The blue lines show down-slope paths calculated from a 1983 digital elevation model” 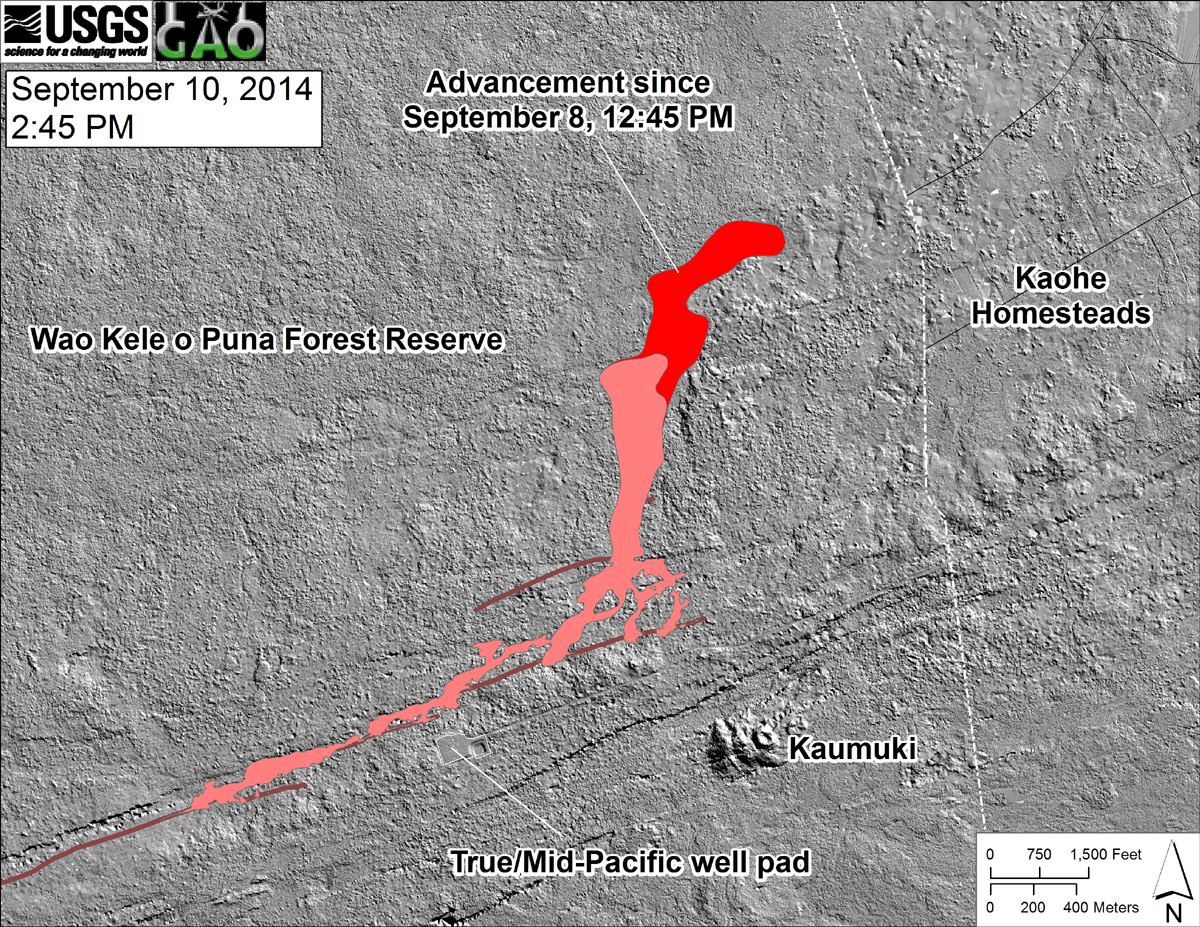 From USGS: “This shaded-relief map, with digital surface data provided by the Carnegie Airborne Observatory, shows some of the cracks, faults, and grabens (down-dropped blocks between adjacent faults; http://earthquake.usgs.gov/learn/glossary/?term=graben) that are present in Kīlauea’s East Rift Zone, and which have partly controlled the June 27th flow’s advance direction. The June 27th flow as of September 8, 2014, at 12:45 PM is shown in pink, while flow advance since then (as of ~2:45 PM on September 10) is shown in red. At the time of the mapping, the flow was advancing toward the northeast.” 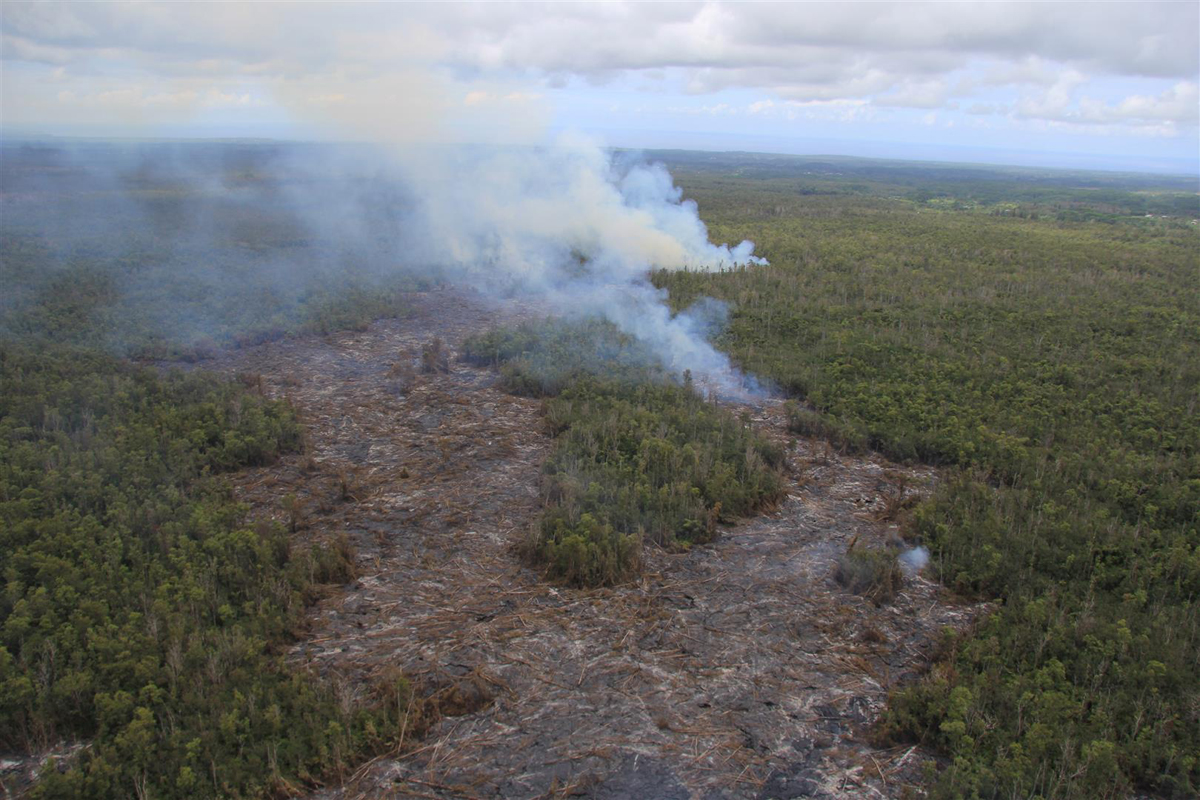 (USGS HVO) View from above the end of the June 27th lava flow, looking along its northeast trend through the Wao Kele o Puna Forest Reserve. On the afternoon of September 10, 2014, the flow front was 0.6 km (0.4 mi) from the boundary between the Forest Reserve and Kaohe Homesteads, visible at far right. 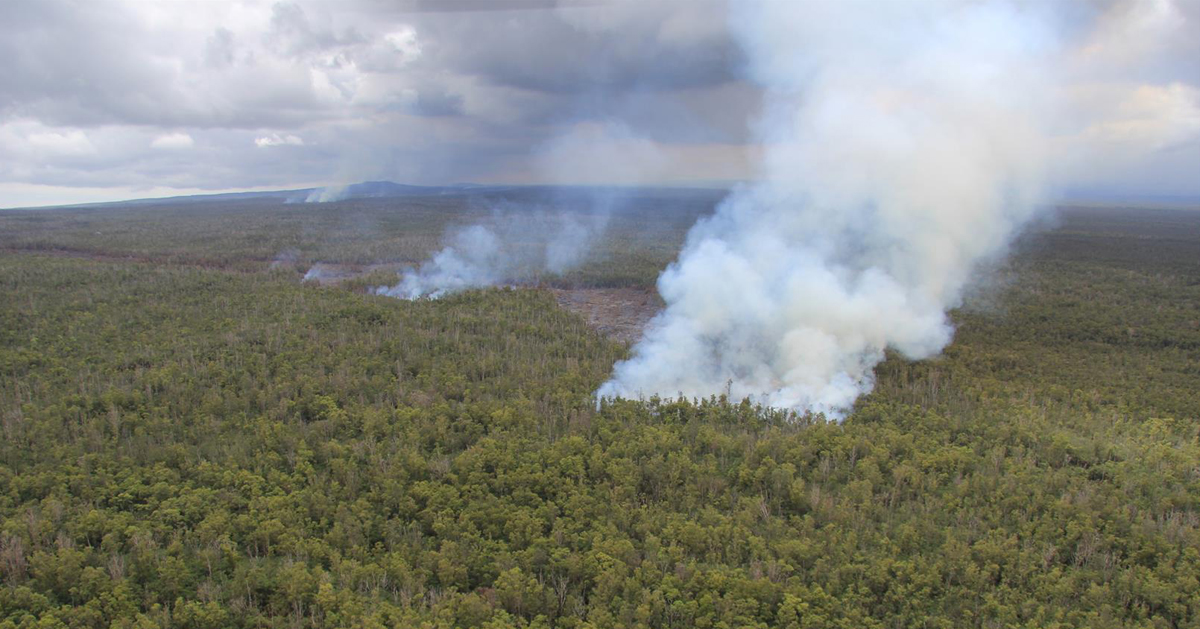 (USGS HVO) The flow continued to advance through thick forest, creating smoke plumes as it engulfed trees and other vegetation. The smell of smoke has been detected far downwind of the flow, but fires are not spreading beyond the margin of the flow. Small, sluggish breakouts of lava (smoke plumes in far distance) also remain active closer to Puʻu ʻŌʻō, roughly midway along the length of the June 27th flow.