A report on the county's emergency road building effort, and the sacrifice it requires.

(ABOVE VIDEO) A report on the county’s emergency road building effort, and the sacrifice it requires.

PUNA, Hawaii – The alternate roads that are being constructed right now in Puna have been foremost on the minds of residents living all over the Puna district. The county is currently scrambling to connect Hawaiian Paradise Park and Hawaiian Beaches at Railroad Avenue and Beach Road in case Highway 130 gets covered by the approaching lava flow. Mayor Billy Kenoi has set a completion date of September 24 for Railroad.

Having the ability to carry out the road construction quickly comes at the expense of one of Mayor Kenoi’s longtime dreams. The county must halt construction on the Pahoa District Park, which was set to be the biggest recreational project in the history of Hawaii County. The contractor for the project, Nan Inc., will instead put their heavy machinery to work on the emergency roads. 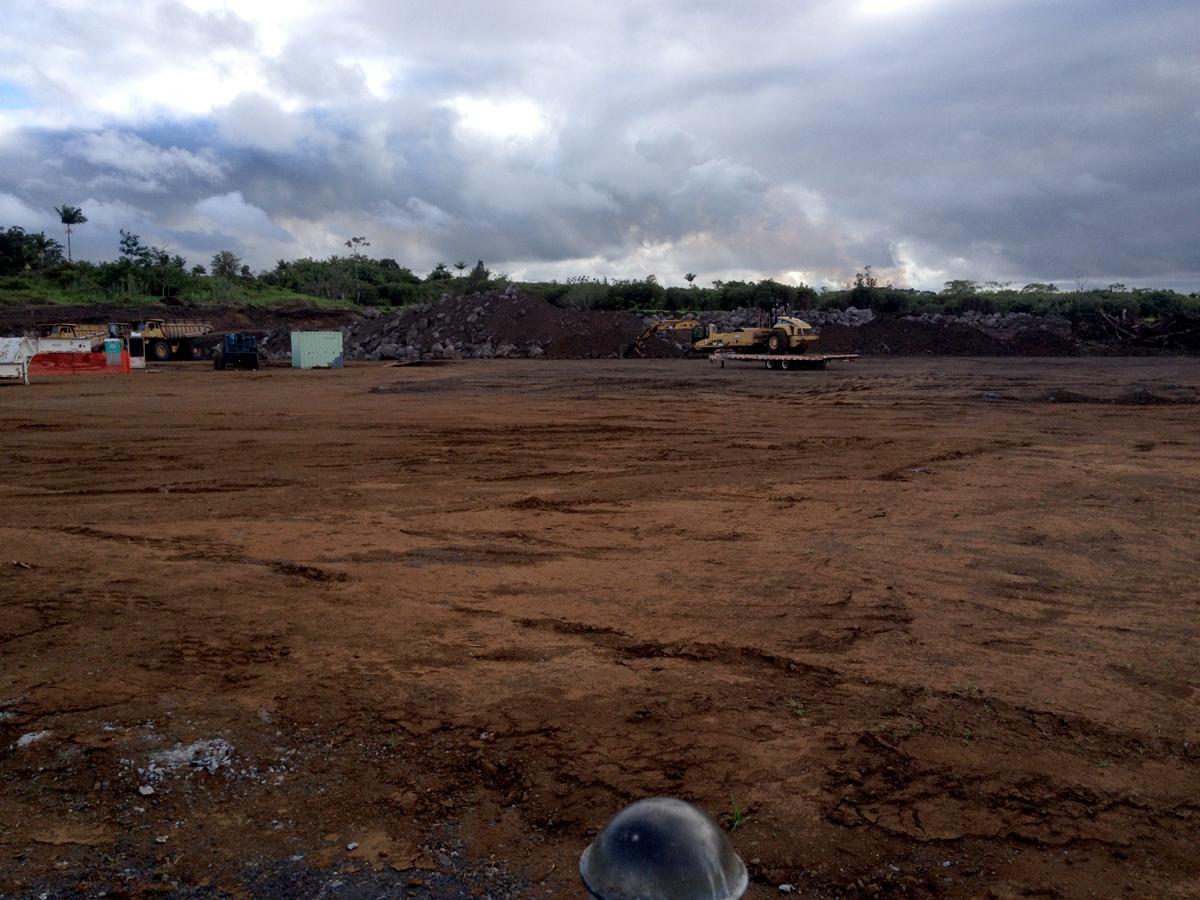 The $22.3 million Pahoa District Park project has been put on hold as a lava flow approaches. The cleared land sits quiet, for now. Photograph of an official Hawaii County map showing planned roadwork. Much of it is already well underway.

Here is a portion of a message to members of the Hawaiian Paradise Park Owners Association currently posted to HPPOA website and being shared across social media. It was written by Jerry Carr, who chairs the HPPOA Emergency Access Road Committee, and it details the questions and answers the committee posed to Hawaii County Public Works Director Warren Lee on September 11:

Two routes are being built. One will be a two-lane compacted sub-base unpaved road along Railroad between Hawaiian Beaches and HPP. This may be extended as far as Nanawale Estates. The second will follow Government Beach Road between Hawaiian Beaches and HPP and will be a single lane with pull-outs, also unpaved. Construction on Railroad is to start immediately with completion anticipated by 24 September. Government Beach will be on a longer time line, but will be done. Railroad will be gated and closed to access until and unless Highway 130 is blocked north of Pahoa.

2. What will be done to mitigate the negative impacts on HPP, specifically items “a” though “e” below?

a. Traffic control and enforcement:

Portable traffic lights will be installed at Railroad and Makuu as well as at Makuu and Highway 130. Alternate Route traffic will be limited to Makuu with signage clearly marking the route. HPP will be provided with barricades to block access to side roads and authorized by the County to station volunteers at the barricades to direct traffic off the side roads. Some National Guard personnel should also be available to help with traffic management.

b. Damage to roads and associated costs:

The County will maintain Makuu for the duration of the alternate route, leaving it in “as good or better condition” at the end of the emergency as before it.

c. Indemnification against potential damage action brought against the HPPOA:

Mr. Lee will have the County forward language for an indemnification agreement to the HPPOA office for review and approval.

3. Will the route(s) be decommissioned at the end of the emergency?

The County’s plan is to decommission Beach, but Railroad is state property and Mr. Lee could not make assurances on the part of the State of Hawaii. (Mr. Lee did state, “This is an emergency access road only, and not a Puna Makai Alternate Route.” The Committee will try to get clarity from the State on their plans in this regard.)

4. Will a public forum be held in HPP so that residents can express their concerns and voice their opinions to County and other Officials?

Efforts will be made to have representatives of the County of Hawaii Civil Defense Agency and other pertinent agencies attend the HPPOA Board of Directors meeting on September 17 to allow community participation. Mr. Lee and Councilman Ilagan have already agreed to attend.