The lava has advanced 150 yards since yesterday, and flights over flow are now restricted.

(ABOVE PHOTO) A satellite image captured by the Advanced Land Imager instrument onboard NASA’s Earth Observing 1 satellite shows the flow front position on Sunday. “Although this is a false-color image,” USGS Hawaiian Volcano Observatory writes, “the color map has been chosen to mimic what the human eye would expect to see. Bright red pixels depict areas of very high temperatures, and show active lava. White areas are clouds. For reference compare the flow outline shown here in yellow to the large-scale flow field map provided in the “maps” link above. The grid shows coordinates in Universal Transverse Mercator, with a grid spacing of one kilometer (0.6 miles).”

Deflationary tilt began at Kīlauea’s summit on Thursday but we have yet to see a complete flow front stall like was seen a few weeks ago.

The Federal Aviation Administration has put temporary flight restrictions in place over the lava flow. Pilots may no longer operate an aircraft in the area. “Only relief aircraft operations under direction of state civil defense are authorized in the airspace,” stated FAA on October 4th. 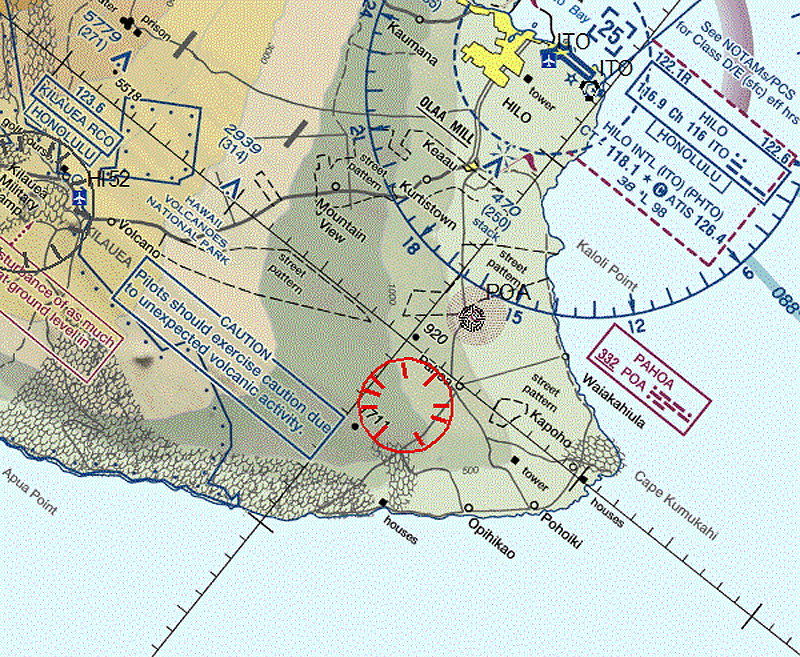 This morning’s assessment shows that the flow front continues to be active and has advanced approximately 150 yards since yesterday. The narrow flow front is moving along the tree line and the burning activity is producing a significant amount of smoke. There is no brush fire threat at this time and the burning is limited to the edges of the flow only. Due to a light southwest wind this morning the vog and smoke conditions were moderate to heavy across lower Puna to Hilo.

The public is also reminded that the flow is not visible and cannot be accessed from any public areas. Access to the Kaohe Homesteads subdivision will remain restricted to area residents only.Hawaii County Civil Defense on Oct. 6

The June 27th lava flow remains active. Based on this morning’s observations by Civil Defense the flow has advanced approximately 140 m (150 yards) since yesterday. Since the flow resumed its advance this past Wednesday, it has moved downhill by approximately 540 m (590 yards) . An HVO overflight is planned around midday on Monday.

Summit Observations: Deflationary tilt at Kīlauea’s summit continues this morning along with a decrease in the lava lake level at the summit vent. There was no major change in seismicity on Kilauea over the past day; seismic tremor at the summit remained low and varied with changes in spattering on the surface of the lava lake. GPS receivers spanning the summit caldera recorded about 5 cm (2 in) of extension between early May and early July. Since then, little significant extension or contraction has occurred. During the week ending on September 30, 2014, the elevated summit sulfur-dioxide emission rate was measured at 3,600–5,200 tonnes/day (see caveat below), and a small amount of particulate material was carried aloft by the plume.USGS Hawaiian Volcano Observatory on Oct. 6