The lava flow front has slowed a little over the last day, advancing 90 yards since yesterday morning at an average rate of about 5 yards per hour.

(ABOVE PHOTO) This USGS Hawaiian Volcano Observatory photo taken on October 27 at 11:30 a.m. shows the flow front nearing residential areas in the northwest portion of Pāhoa. The flow front was heading towards a low spot on the Pāhoa Village Road, between Apaʻa St. and the post office.

The flow continues to remain active and has advanced approximately 90 yards since yesterday morning and is currently approximately 510 yards from Pāhoa Village Road. The flow front is currently moving in a northeast direction and has entered a private residential property. The flow advancement has been inconsistent however averaging approximately 5 yards per hour.

Smoke conditions were light to moderate with moderate trade winds from the northeast pushing the smoke in a south southwest direction. Smoke conditions may increase in some areas and residents down wind that may be sensitive or have respiratory problems are advised to take necessary precautions and to remain indoors. Additional health advisories may be issued depending upon materials involved with any fires associated with the lava flow. Currently all burning is limited to vegetation only.

The Pahoa Village Road between Apa’a Street and the Post Office Road will remain closed and limited to area residents only. In addition, Civil Defense and public safety personnel will be operating in the area round the clock to maintain close observations of flow activity.Hawaii County Civil Defense on Oct. 28 at 8 a.m. HST

Kīlauea continued to erupt at its summit and within the East Rift Zone, and gas emissions remained elevated. Currently, the June 27th flow is advancing northeast through residential areas between Apaʻa St/Cemetery Rd and Pāhoa Village Road. The leading edge of the fastest advancing lobe of the flow has been moving at rates varying between 10 and 15 m/hr (11 to 16 yd/hr) during the past 24 hours, except for a period between 2am and 5am, when the front stopped advancing and the flow inflated in a small topographic low. At 6am, the lobe was about 75m (82 yd) wide. At 9AM, the flow front was about 440 m (480 yd) straight-line distance from Pāhoa Village Road and was advancing at 15 m/hr (16yd/hr).

June 27th Lava Flow Observations: HVO scientists monitored the leading portions of the June 27th flow on an overflight yesterday, and on the ground throughout the day and night. The most rapidly advancing lobe of the flow entered the first occupied residential property at about 2 am this morning, and is continuing to advance northeast towards Pāhoa Village Road, currently at a rate of 15 m/hr (16 yd/hr). We expect the flow to cross Pahoa Village Road between Apaʻa St and Post Office Road.

A few breakouts continue to occur upslope of the leading flow lobe within about 3 km (1.9 miles) of the flow front. No breakouts were observed further upslope all the way to Puʻu ʻŌʻō. Scientists are currently monitoring the flow front and will issue a status update this afternoon. USGS Hawaiian Volcano Observatory on Oct. 28 at 9:18 a.m. HST 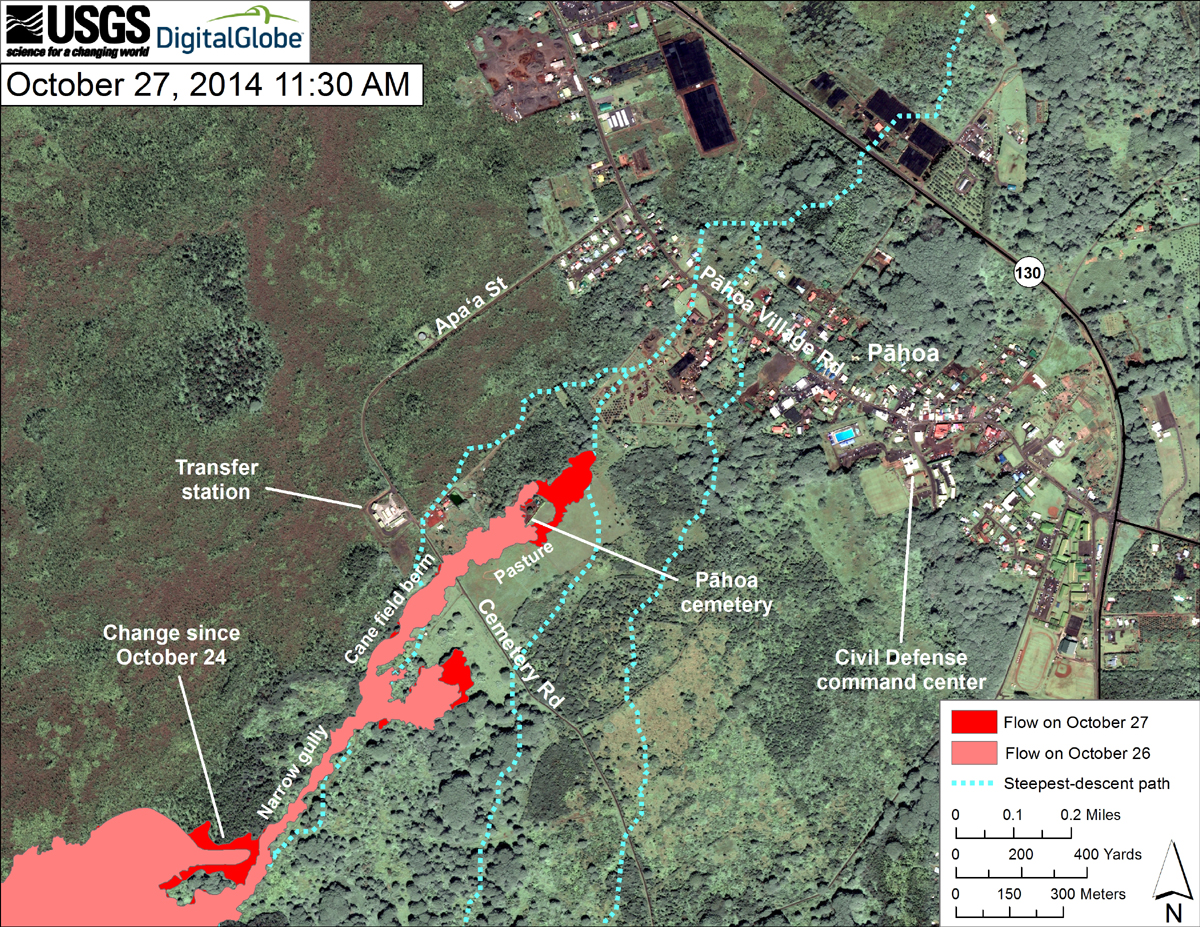 USGS map posted on Monday shows a “satellite image acquired in March 2014 (provided by Digital Globe) as a base to show the area around the front of the June 27th lava flow. The area of the flow on October 26, 2014, at 12:30 PM is shown in pink, while widening and advancement of the flow as mapped on October 27 at 11:30 AM is shown in red. The dotted blue lines show steepest-descent paths in the area, calculated from a 1983 digital elevation model (DEM).
The flow advanced about 180 meters (200 yards) during the preceding 23 hours, and reached thick vegetation beyond the northeast edge of the lush pasture that the flow had been traversing. At the time of mapping, the flow was 540 meters (590 yards) directly upslope from Pāhoa Village Road. The latitude and longitude of the front of the narrow finger of lava advancing toward Pāhoa was 19.49307, -154.95469 (Decimal Degrees; WGS84). Though not shown on this map, the flow advanced an additional 30 meters (33 yards) by 4:30 PM.”