(ABOVE VIDEO) Hawaii County Civil Defense message with video taken from two Friday overflights and from the ground.

This morning’s assessment shows that the flow front remains stalled with very little activity and has not advanced over the past week. The flow pad continues to show signs of inflation which could result in breakouts and more activity. The front remains approximately 480 feet from the Pahoa Village Road. The upslope breakouts remain approximately .7 to 1.5 miles above the Apa’a Street area and along the north side of the flow and moving in a north/northeast direction. Active burning along the flow edges in the areas of the cemetery and above the transfer station continues and limited to the vegetation in contact with the flow. The smoke from the active burning may be visible throughout the day however there is no brush fire threat at this time.

Smoke conditions are light with variable winds. Smoke conditions may increase in some areas and residents down wind that may be sensitive or have respiratory problems are advised to take necessary precautions and to remain indoors.

Kīlauea volcano continues to erupt at its summit and within its East Rift Zone. The leading edge of the June 27 lava flow has not advanced beyond where it stalled on October 30. A helicopter overflight by HVO scientists on Friday afternoon, and by County Civil Defense on Saturday morning, observed localized breakouts of lava in scattered locations upslope of the stalled leading flow edge. The most downslope breakout was active 450 meters (490 yards) above the flow front. Inflationary tilt began at Kīlauea’s summit on Friday afternoon, and thermal images show the level of the summit lava lake at Halemaʻumaʻu Crater to be higher than the previous day.

June 27th Lava Flow Observations: Visual and thermal observations during HVO’s Friday overflight confirmed that the leading tip of the flow had not advanced beyond where it stalled on October 30, in a residential area approximately 155 meters (170 yards) above Pāhoa Village Road. Multiple breakouts were observed in areas upslope of the leading edge, the lowest of which was active about 450 meters (490 yards) above the stalled flow front. Other breakouts were active immediately upslope of Apaʻa Street (moving towards the transfer station at a distance of about 120 m, or 130 yards), scattered from about 850 m (930 yards) to 2.7 km (1.7 miles) upslope of Apaʻa, roughly halfway between Puʻu ʻŌʻō and the flow tip, and on the north flank of Puʻu ʻŌʻō. The cross sectional area of the lava tube on Friday was 2.4 square meters (2.9 square yards), slightly higher than measured on October 31, and implying a small increase in the amount of lava flowing through the tube. An aerial view into a skylight revealed flowing lava in the main tube feeding the June 27th lava flow. An overflight by County Civil Defense on Saturday morning confirmed that the leading edge of the flow remains stalled.

Puʻu ʻŌʻō Observations: Thermal imagery detected several minor overflows from a small lava pond in the south pit in Puʻu ʻŌʻō’s crater. During Friday’s overflight, HVO scientists observed fresh lava from these overflows, and incandescent openings were seen in the north and northeast pits. Seismic tremor continued at low and relatively steady amplitudes. Several small earthquakes were located beneath the East Rift Zone and Kīlauea’s south flank, but none were located in the vicinity of Puʻu ʻŌʻō. The most recent sulfur-dioxide emission-rate measurement for the East Rift Zone was 320 tonnes per day (from all sources) on October 31, 2014. The tiltmeter at Puʻu ʻŌʻō has been repaired but it is too early to tell if the work has corrected the malfunction there, as the instrument requires a few days to settle before it can be returned to operation. The GPS-measured length across the cone has not changed significantly since July.

Summit Observations: Following several days of little change, inflationary summit tilt began around 1500h on Friday at a modest rate. The surface of the lava lake in the Overlook vent was 56 m (61 yards) below the vent rim on Friday at 0837h, and thermal camera images show an increase in the surface height over the following day. Several small earthquakes were located beneath the summit, and volcanic tremor persisted with a fluctuating amplitude. Small amounts of particulate material were carried aloft by the plume. Summit emissions of sulfur dioxide ranged from 3,400 to 6,400 tonnes/day (see caveat below) through the week-long period ending November 4, 2014.USGS Hawaiian Volcano Observatory on Nov. 8 at 8:26 a.m. HST 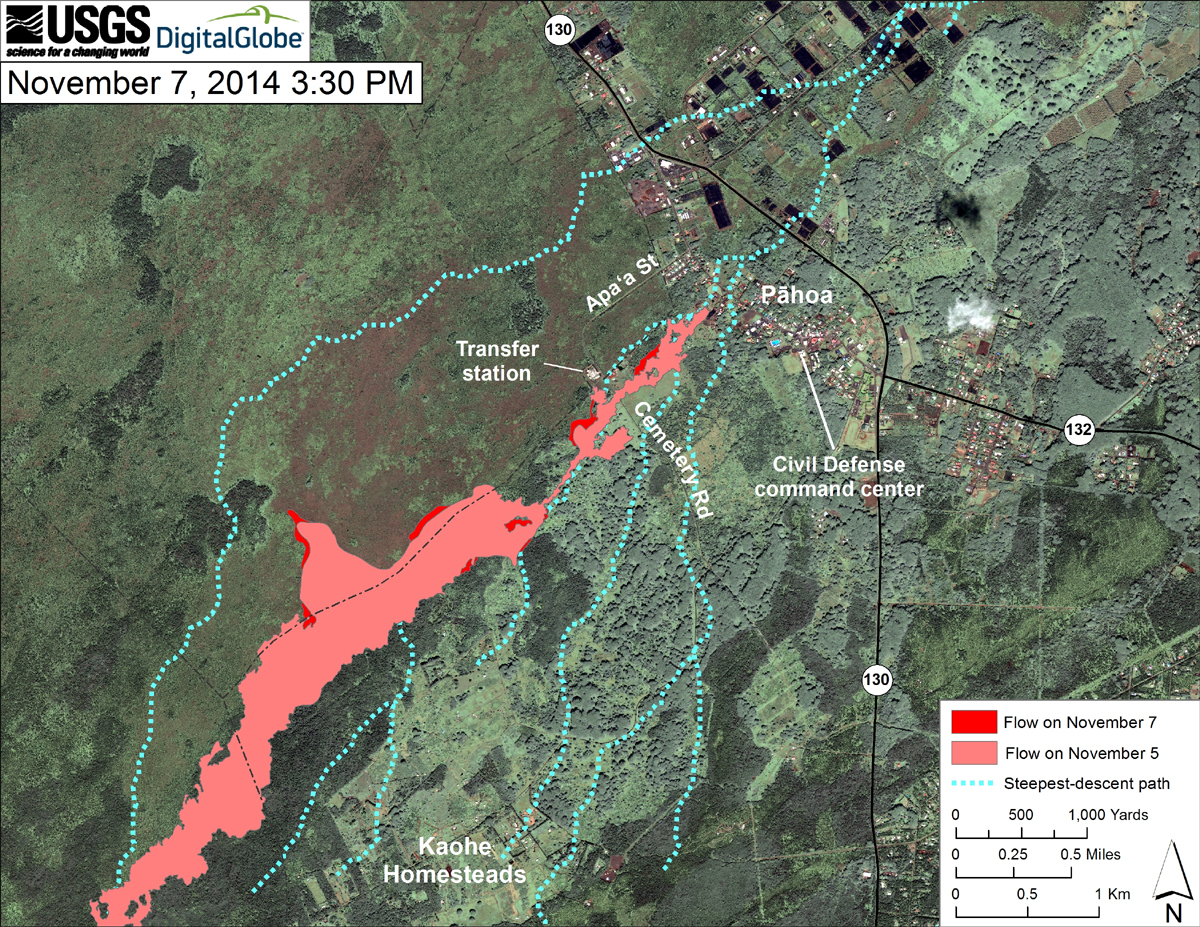 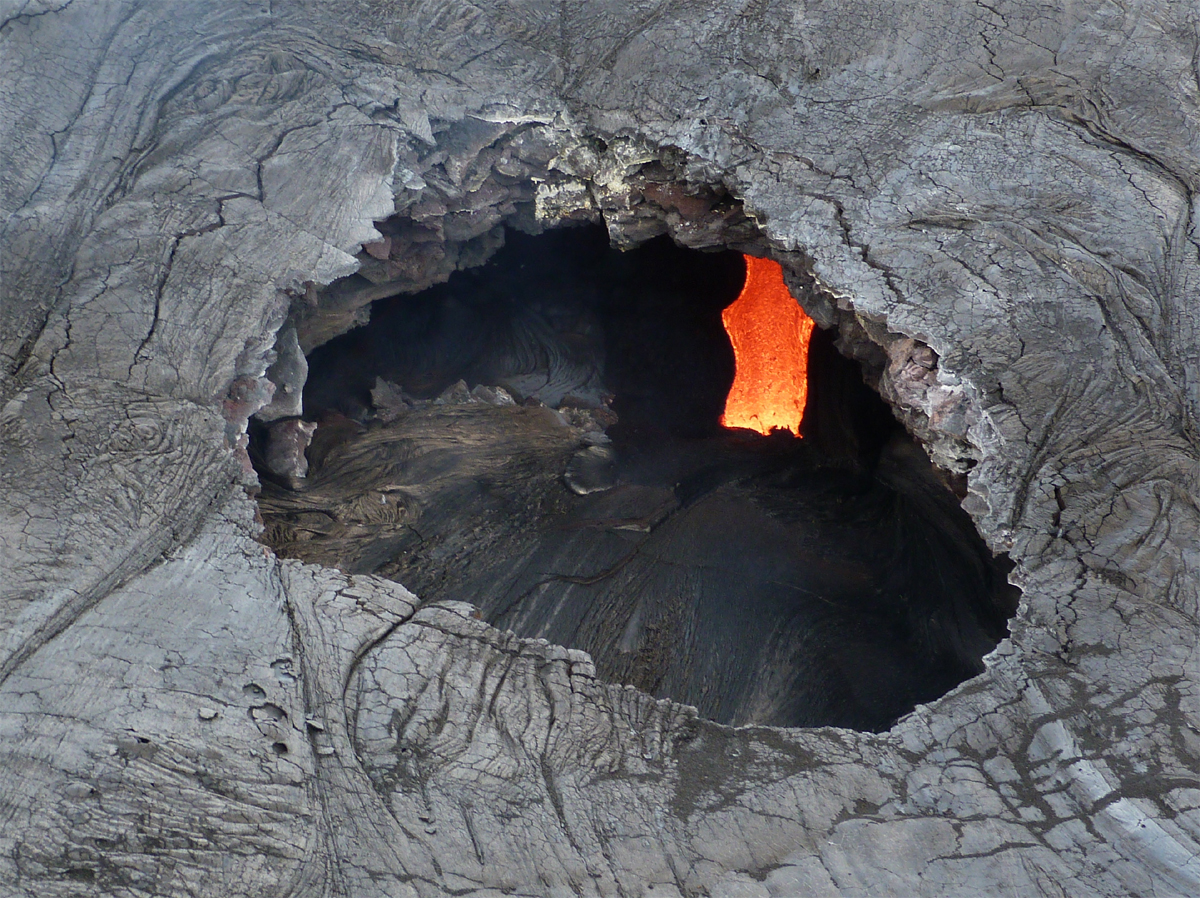 USGS HVO photo shows an aerial view into a skylight that reveals flowing lava in the main tube feeding the June 27th lava flow. The large opening is about 7 meters (7.5 yards) across.