At the current advance rate, lava could reach Pahoa Marketplace and Highway 130 in about 5 days.

(ABOVE PHOTO) USGS photo shows HVO geologists walingk over the lava tube on the northern flank of Puʻu ʻŌʻō while conducting a very low frequency (VLF) survey. Measurements are taken along a line of points (at flagged rocks) crossing perpendicular to the tube.

This morning’s assessment shows that the flow front remains active and continues to advance in an east-northeast direction. The active flow had advanced approximately 220 yards since yesterday and the front remains approximately .9 mile upslope of the Highway 130 and Pahoa Village Road intersection. Current activity does not pose an immediate threat to area communities and Civil Defense and Hawaiian Volcano Observatory personnel are maintaining close observations of flow activity. Residents and businesses down slope will be kept informed of any changes in flow activity, advancement, and status. As the flow activity continues to show signs of advancement, businesses in the Pahoa Market Place are taking necessary steps to prepare for a possible evacuation. Motorists are advised to drive with caution and to be prepared for increased traffic and large vehicles in the area.

Smoke conditions were moderate to heavy this morning in the immediate area with a light north wind blowing the smoke in a south southeast direction. Smoke conditions may increase in some areas and residents that may be sensitive or have respiratory problems are advised to take precautions and to remain indoors. 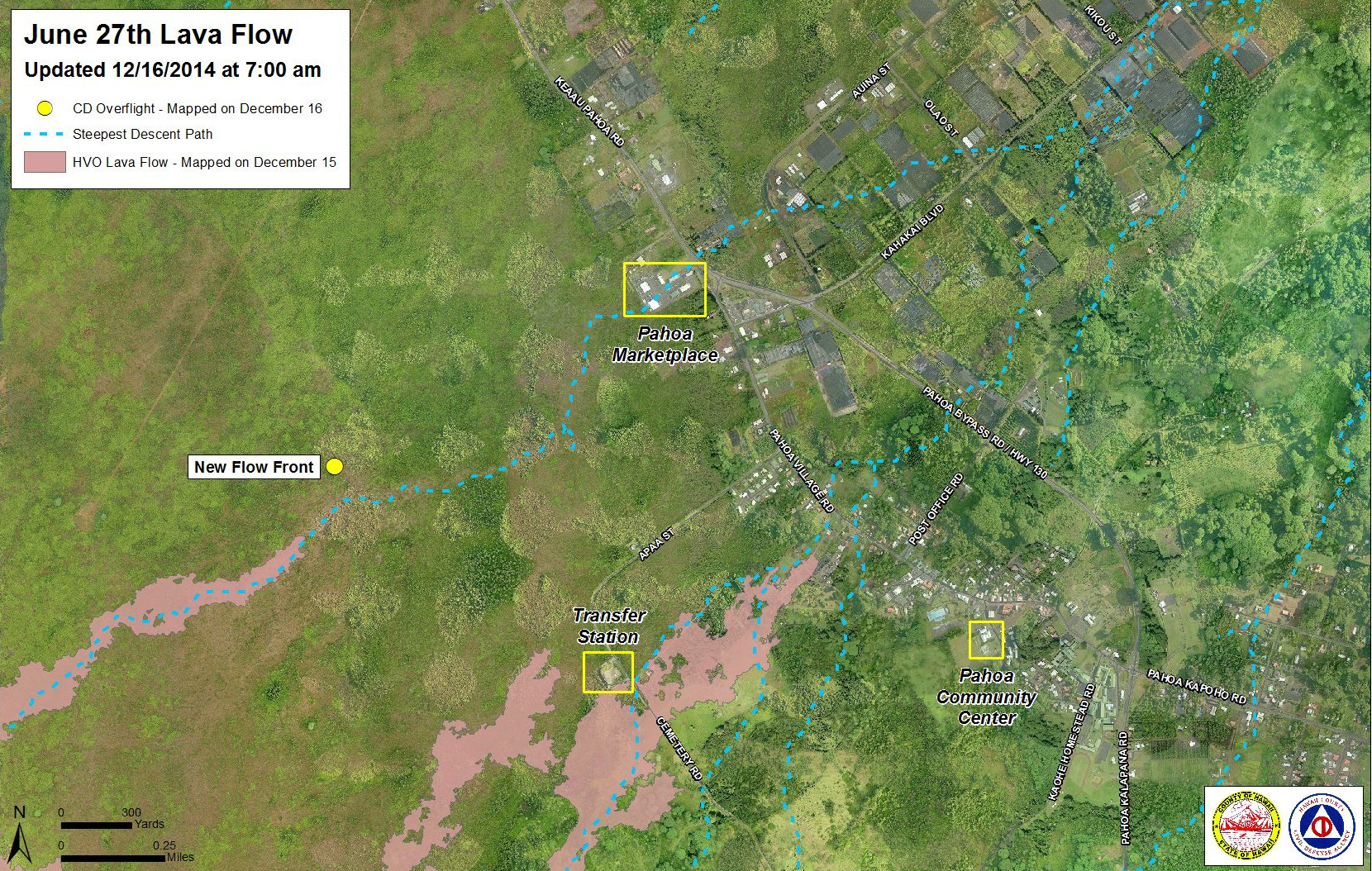 From the breakout point in the crack system the flow is now about 8 km (5 m) in length, and has moved along a new calculated steepest descent path based on a 1983 digital elevation model of the ground. The steepest descent path leads to the Pahoa Marketplace. At the average rate of advance of the past week, lava could reach the marketplace and Highway 130 in about 5 days, warranting this Volcanic Activity Notice.

The eruption rate measured today from the Pu`u` Ō`ō vent is not significantly different from the measurement obtained on December 9. A tiltmeter at Kīlauea’s summit recorded an overall inflationary trend during the past week, but has not changed in the past 24 hours. This suggests that the advance rate of the active flow is not likely to slow appreciably during the next few days, barring a sudden, significant deflationary tilt at the summit or large, new breakouts upslope.

Several breakouts upslope were observed by HVO scientists during today’s overflight along the margins of the new flow and also from the crack system and upslope near Pu`u` Ō`ō. These breakouts, however, have not slowed the active flow front based on today’s observations.

Recent Observations:
[Lava flow] A new lobe of the June 27th lava flow has advanced toward the Pahoa Marketplace at about 285 m/day (310 yd/day) since December 9. The leading edge is now about 1.5 km (0.9 mi) as measured along the steepest descent path to the marketplace.
[Volcanic cloud height] Unknown
[Other volcanic cloud information] Unknown

Hazard Analysis:
[Lava flow] A new lobe of the June 27th lava flow from the Pu`u` Ō`ō vent is active, steadily advancing downslope toward Highway 130 and the Pahoa Marketplace. At an average advance rate of 285 m/day (310 yd/day), the flow front could reach the marketplace within 5 days.

Remarks: The Pu`u `Ō`ō vent in the East Rift Zone of Kīlauea Volcano began erupting on January 3, 1983, and has continued erupting for more than 31 years, with the majority of lava flows advancing to the south. Over the past two years, lava flows have issued from the vent toward the northeast. The June 27th flow is the most recent of these flows and the first to threaten a residential area since 2010-2011.
On June 27, 2014, new vents opened on the northeast flank of the Pu`u `Ō`ō cone and fed a narrow lava flow to the east-northeast. On August 18, the flow entered a ground crack, traveled underground for several days, then resurfaced to form a small lava pad. This sequence was repeated three more times over the following days with lava entering and filling other cracks before reappearing at the surface, in two of the cases farther downslope. Lava emerged from the last crack on September 6, forming a surface flow that initially moved to the north, then to the northeast, at a rate of 400 m/day (1,300 ft/day). This flow advanced downslope fitfully before stalling in Pāhoa on October 30 about 155 m (170 yd) from Pāhoa Village Road. Breakouts upslope continued to widen the flow, however, through mid-November.

A large breakout near Pu`u `Ō`ō November 14-15 temporarily diverted lava from the tube onto the surface, thereby shutting off lava supply to the lower flow. Within a few days, several breakouts along the tube indicated lava had reoccupied the tube as far as about 12 km (7.5 mi) from Pu`u `Ō`ō. The lowermost breakout in the crack system became the source for the new active lobe. This lobe also moved north-northeast on top of and along the west margin of the earlier inactive flow, eventually moving into forest and following a new steepest descent path that leads to the Pahoa Marketplace. USGS Hawaiian Volcano Observatory on Dec. 16 at 10:06 p.m. HST