The flow front remains stalled half a mile upslope of the Highway 130 and Pahoa Village Road intersection but breakouts remain active.

The flow front hasn’t advanced since Friday but breakouts behind it are getting lots of attention. Yesterday, the USGS Hawaiian Volcano Observatory conducted a helicopter overflight and mapped the perimeter of the June 27 lava flow. “At the time of the flight,” wrote scientists in a 6:42 p.m. (Jan. 6) status report, “surface breakouts along the distal part of the flow were scattered between 1 and 3.5 km (0.6 and 2.2 mi) upslope from the Pahoa Marketplace and posed no immediate threat.” 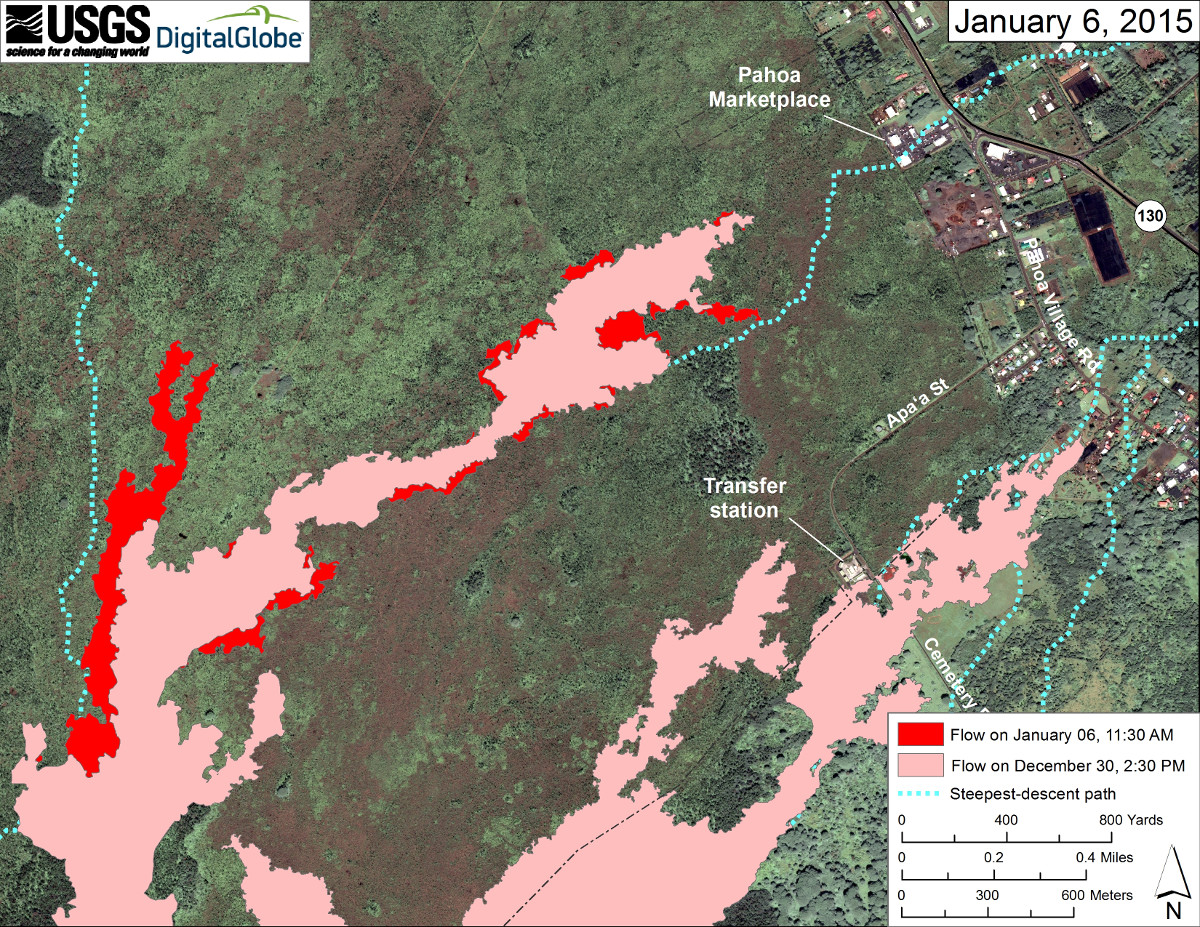 The map above shows the area of the flow on December 30 in pink, while widening and advancement of the flow since that time (mapped on January 6) is shown in red.

There is also an area of persistent activity 4 miles upslope near the True/Mid-Pacific geothermal well site, which can be seen in this large-scale map of Kīlauea’s East Rift Zone lava flow, released on Jan. 6. 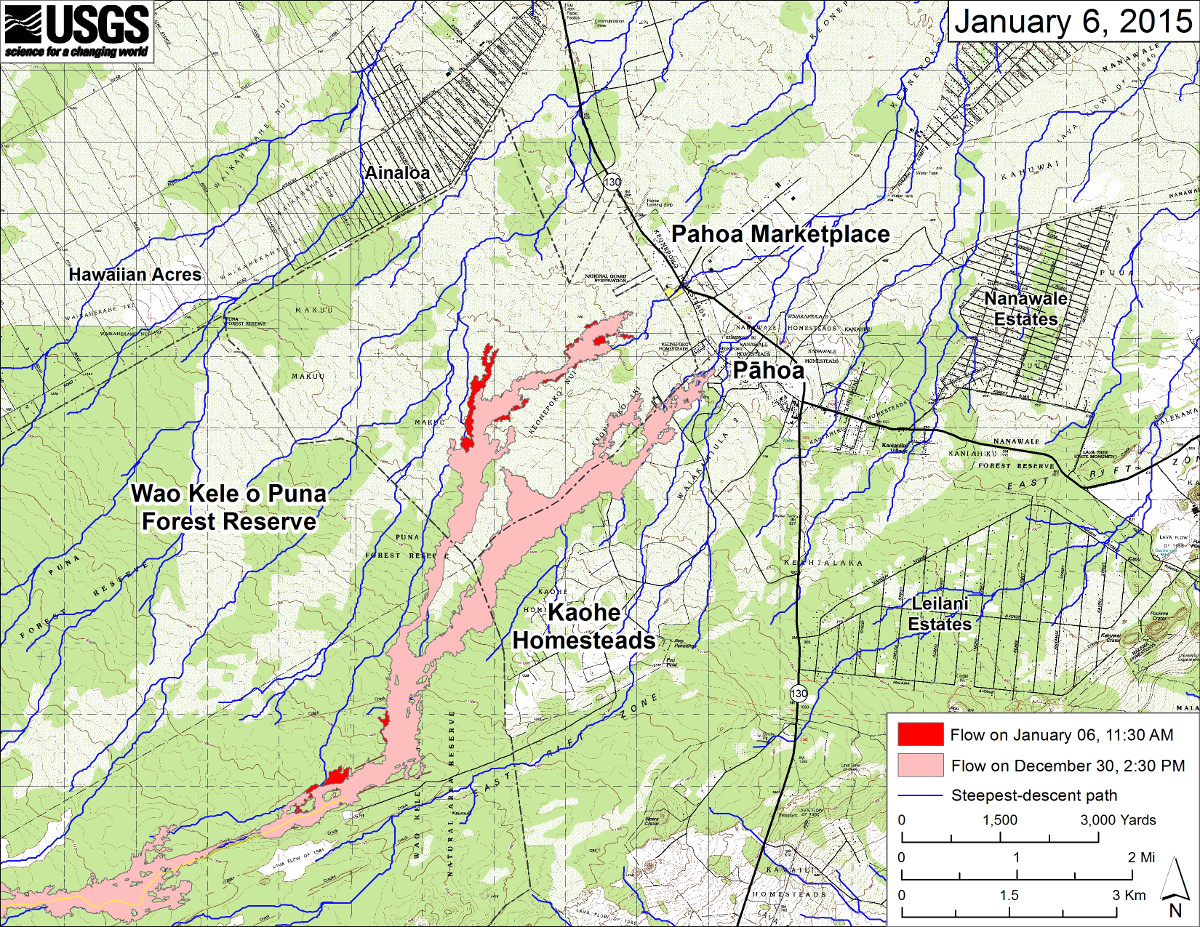 Although it has not advanced, the leading edge of the flow front is still active, with activity 440 to 980 yards behind the stalled tip of the flow above Pahoa Marketplace. This image was posted to the USGS website last night.

A lobe that branches off to the north about 2 miles behind the stalled flow tip is being watched closely. It has been unclear which direction this lobe may end up heading, and for the first time scientists discussed one possibility in last night’s status update. 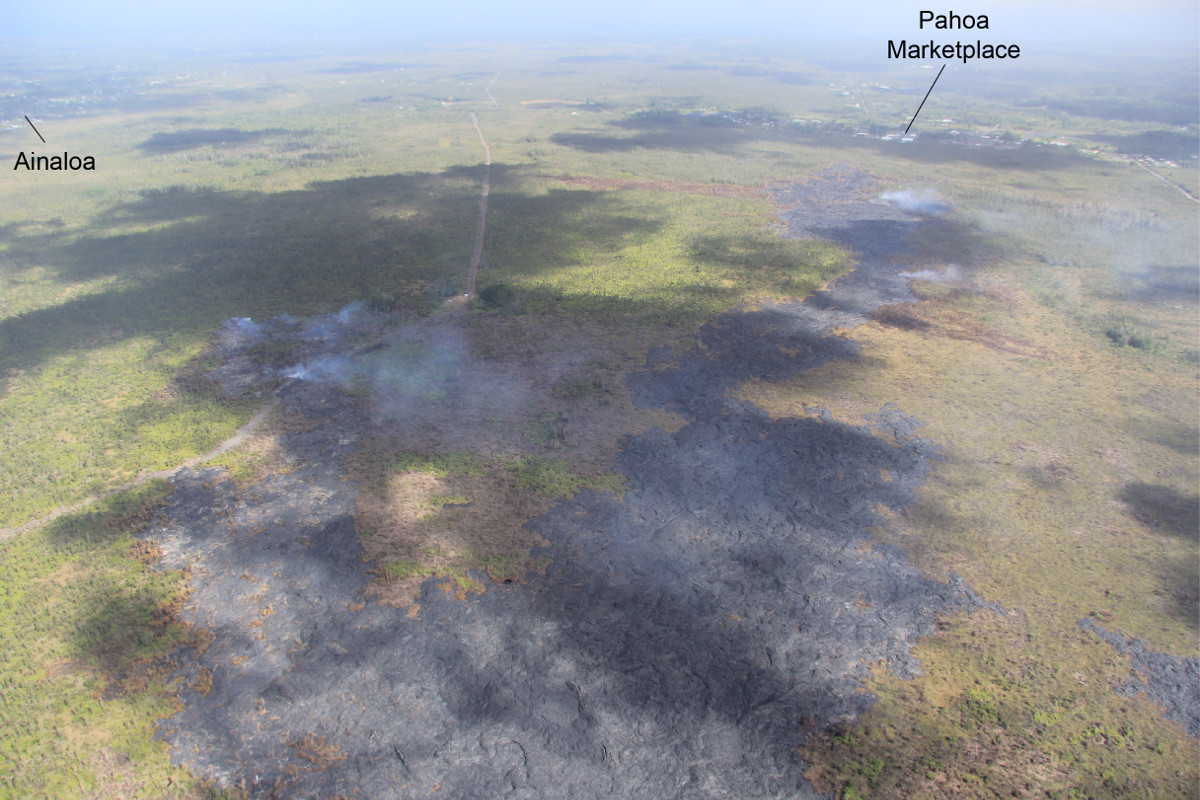 (ABOVE) This view, looking northeast, shows the distal part of the flow, with the flow lobe behind Pahoa Marketplace to the right and the newer north-northeast advancing lobe to the left. The north-northeast lobe is following a drainage that leads to the steepest-descent path that crosses Highway 130 about 1 km (0.6 mi) south of the Maku`u Farmer’s Market. The flow, however, is still 3.5 km (2.2 mi) upslope from that spot and moving slowly. USGS Hawaiian Volcano Observatory on Jan. 6

Civil Defense reports this morning that the lobe has only advanced 75 yards since yesterday. 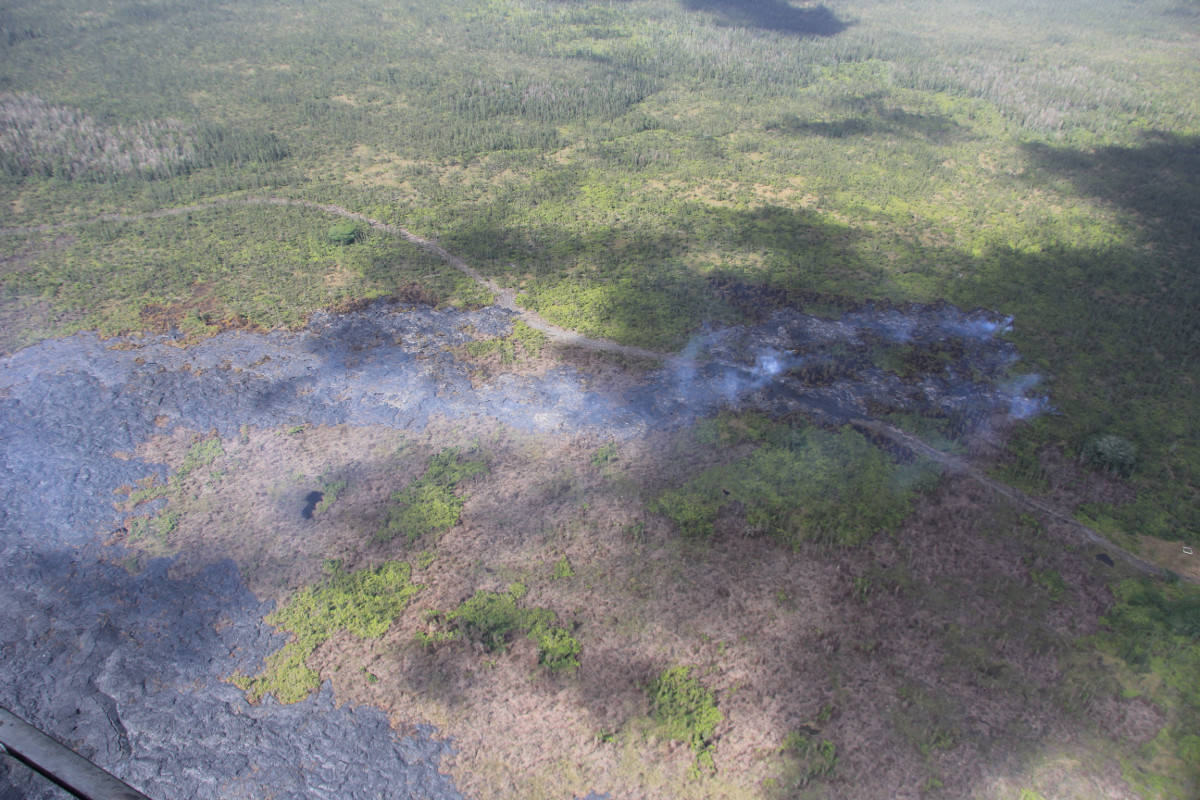 This photo shows a closer view of the narrow north-northeast advancing lobe about 1.6 mi upslope from the Pahoa Markplace. The view is to the northwest. It has already crossed the firebreak.

This morning’s assessment shows that the flow front and south margin breakout remain stalled and there has been no advancement since Friday. The front or leading edge is located .5 miles upslope of the Highway 130 and Pahoa Village Road intersection. Some surface activity continues approximately 200 yards above or upslope of the flow front. Two breakouts along the north margin approximately 1-1.5 miles upslope or behind the flow front remain active and have advanced approximately 75 yards since yesterday in a north/northeast direction. Other surface breakouts and activity along both margins continues upslope however, current activity does not pose an immediate threat to area communities. Civil Defense and Hawaiian Volcano Observatory personnel are maintaining close observations of the flow. Residents and businesses down slope will be kept informed of any changes in flow activity, advancement, and status.

The Railroad Avenue Alternate Access Road will be closed to all traffic effective 12:00noon today, Wednesday January 7th. This closure is necessary to allow for road maintenance and to preserve the road until such time that it is needed. We appreciate everyone’s cooperation and understanding with this closure and assure the community that the alternate access roads will be opened well in advance of any threat or impact of the lava flow.