The closest lobe to Highway 130 is active and widening but is not advancing much.

(ABOVE) This USGS Hawaiian Volcano Observatory photo shows small, sluggish breakouts on the leading tip of the flow, which has not advanced much recently. The flow remains 0.4 miles from Highway 130. 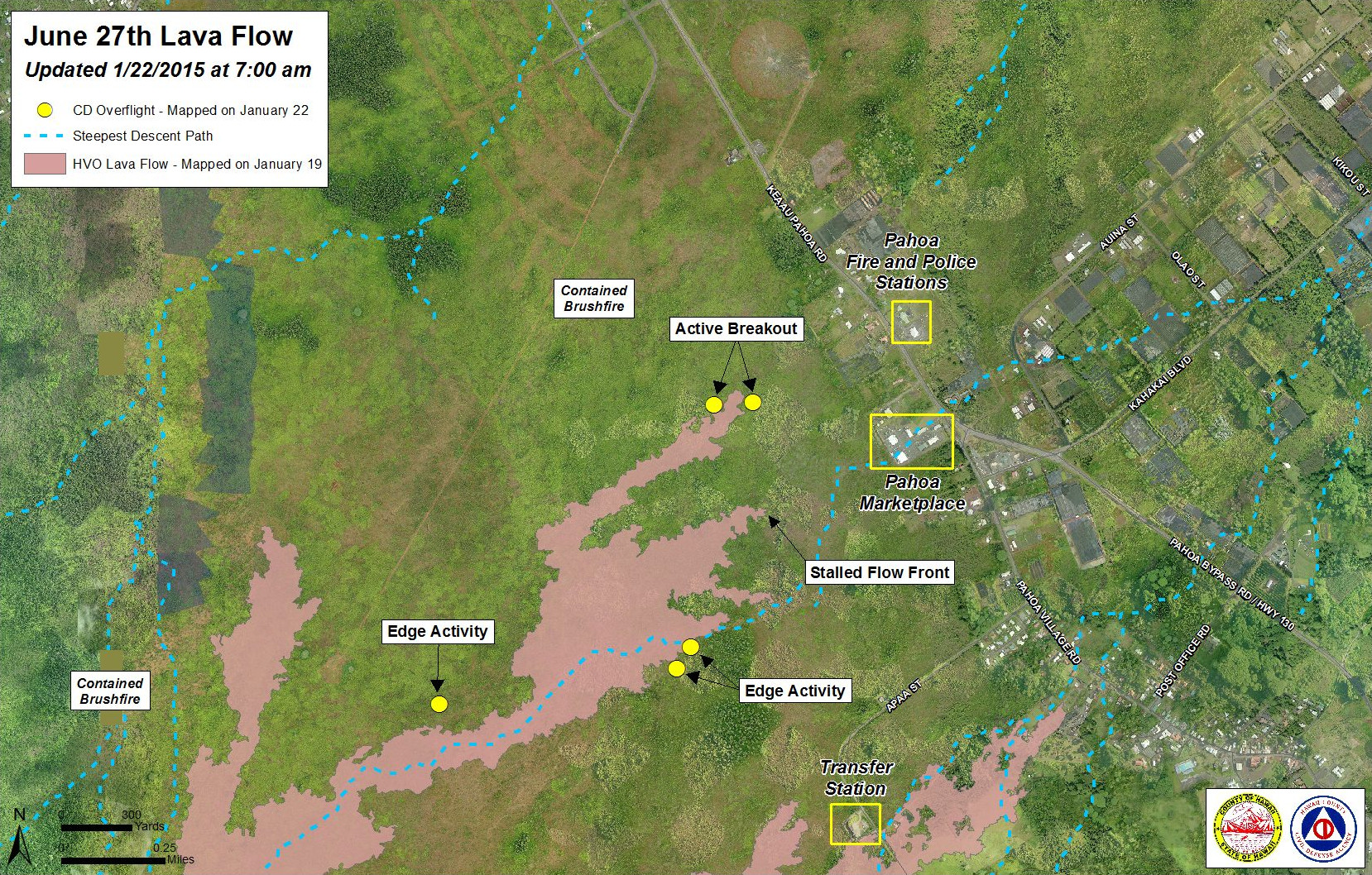 This morning’s assessment shows that the original flow front and south margin breakout remain stalled. The breakout along the north side of the flow continues to be active and widening, however showing little signs of advancement since yesterday. The leading edge or front of this breakout remains approximately 0.4 miles from the area of Highway 130 to the west or mauka of the Pahoa Police and Fire Stations. Two other breakouts along the north margin located 1-1.5 miles further upslope or behind the flow front showed little activity and no signs of advancement. A number of other breakouts along both margins of the flow and within the flow pad were observed however all current activity does not pose an immediate threat to area communities. The Hawaii County Civil Defense Agency and Hawaiian Volcano Observatory are maintaining close observations of the flow. Residents and businesses down slope will be informed of any changes in flow activity and advancement.

Smoke conditions were light to moderate with a light southwest wind blowing the smoke in a northeast direction. Smoke conditions may increase in some areas and individuals who may be sensitive or have respiratory problems are advised to take necessary precautions and to remain indoors.

Kīlauea Volcano continues to erupt at its summit and within its East Rift Zone. In the East Rift Zone, the breakout that had become the leading edge of the June 27th lava flow was active, but has been moving sluggishly since January 17. Based on HVO and County Civil Defense observations, flows are not showing signs of appreciable daily advance, but sluggish breakouts are increasing flow widths. The leading edge remains approximately 600-650 m (0.4 mi) from Highway 130. Numerous breakouts were also active upslope and within the flow interiors. At Kīlauea summit, tilt measurements have leveled off after reaching values measured before the onset of the January 20 Deflationary-Inflationary cycling.

June 27th Lava Flow Observations: According to this morning’s report from Hawai`i County Civil Defense, the breakout from the June 27th lava flow that is furthest downslope was active, but had not advanced since yesterday. The tip was still about 650 m (0.4 mi) from the highway, in the vicinity of the fire and police stations. Civil Defense also reports numerous breakouts along both margins of the flow. HVO observations note that in places, the flow tip could be estimated at ~600 m from Highway 130.

The northern flow lobe that broke out from the main flow about 2.4 km (1.5 mi) upslope of the tip and advanced about 180 m (195 yd) from January 13 to January 19, continues to produce breakouts along the flow margins and within the flow field, but is not advancing.

Puʻu ʻŌʻō Observations: No significant changes are noted since yesterday in monitoring data streams from instruments deplolyed near Pu`u O`o. The most recent measurement of sulfur dioxide emissions from all East Rift Zone vents was about 200 tonnes per day on January 7.

Summit Observations: Summit inflation as part of the DI that began on January 20 has leveled off since reaching pre-DI levels yesterday. Halema`uma`u Overlook lava lake levels continue to fluctuate and the lava lake continues to spatter. The lava-lake level has not changed significantly over the past several days, and at ~1800h Hst yesterday, it was estimated to be about 47 m below the floor of Halemaʻumaʻu. Emission rate of sulfur dioxide ranged from around 4,500 to 7,600 tonnes/day during the week ending January 13.USGS Hawaiian Volcano Observatory on Jan. 22 at 9:24 a.m. HST 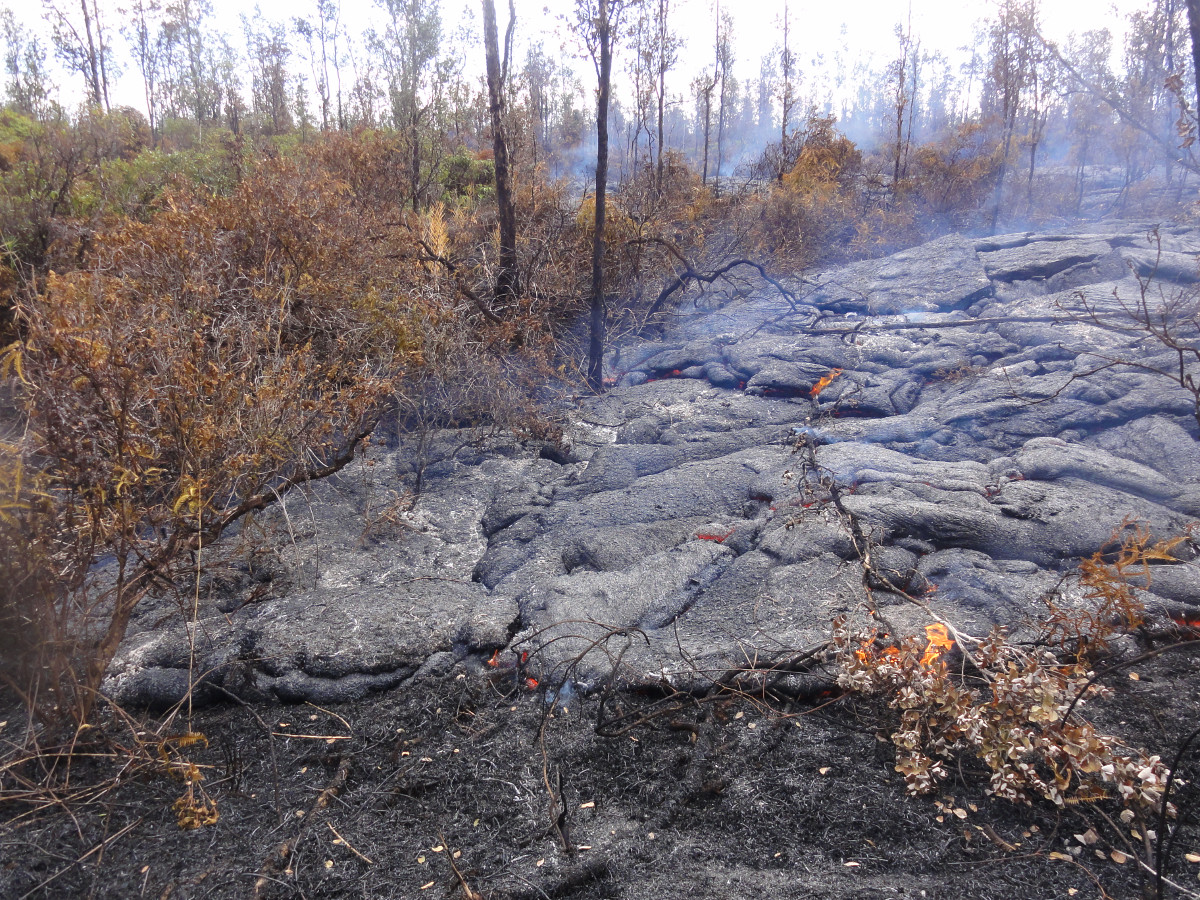 (USGS HVO photo on Jan. 21) Only a handful of small breakouts were active along the leading tip of the flow.