The small, south margin breakout showed no signs of activity and no advancement since yesterday. 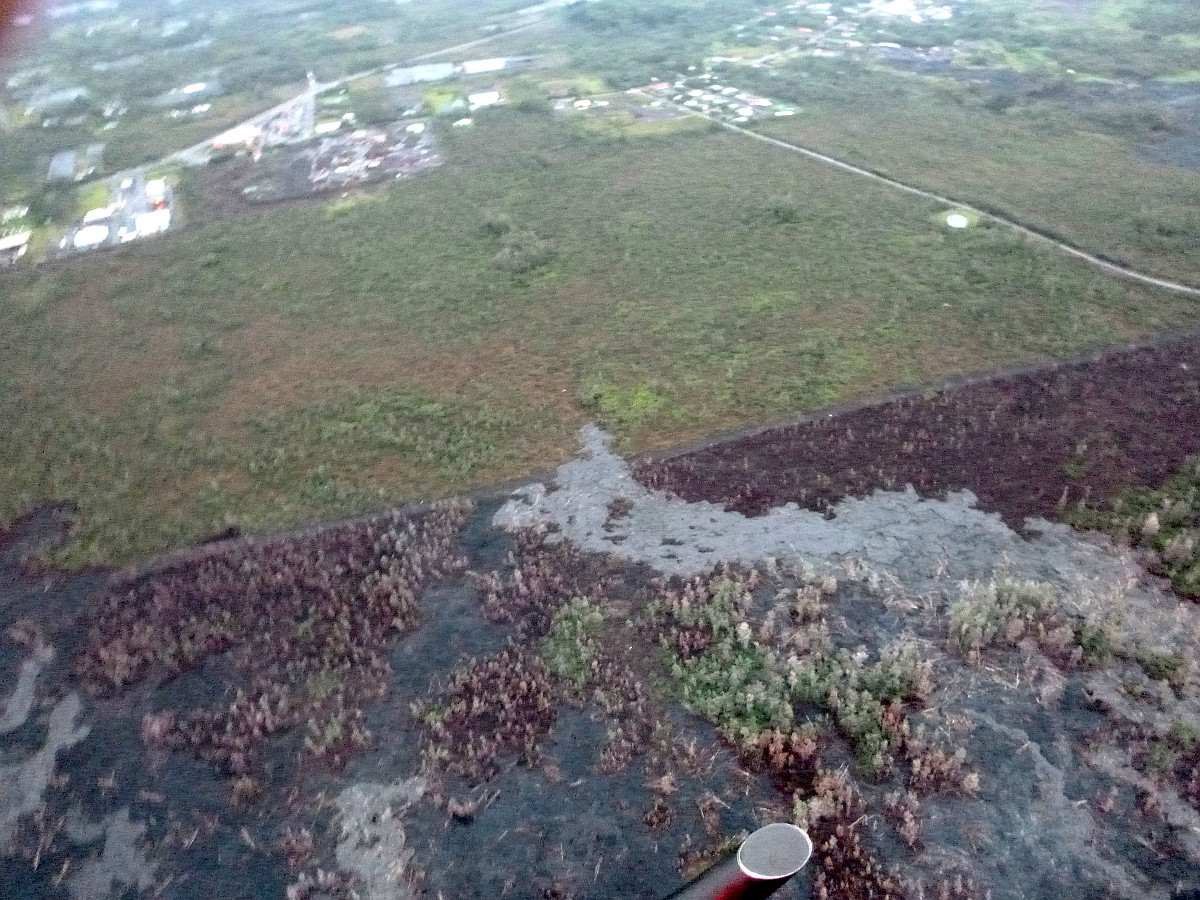 Civil defense image from this morning’s overflight (Thursday, 3/12/15) shows the view from the south flow margin, looking down slope towards Hwy 130, Pahoa Marketplace, and Apaa Street. The breakout, which had been advancing over the last few days, appeared inactive today. 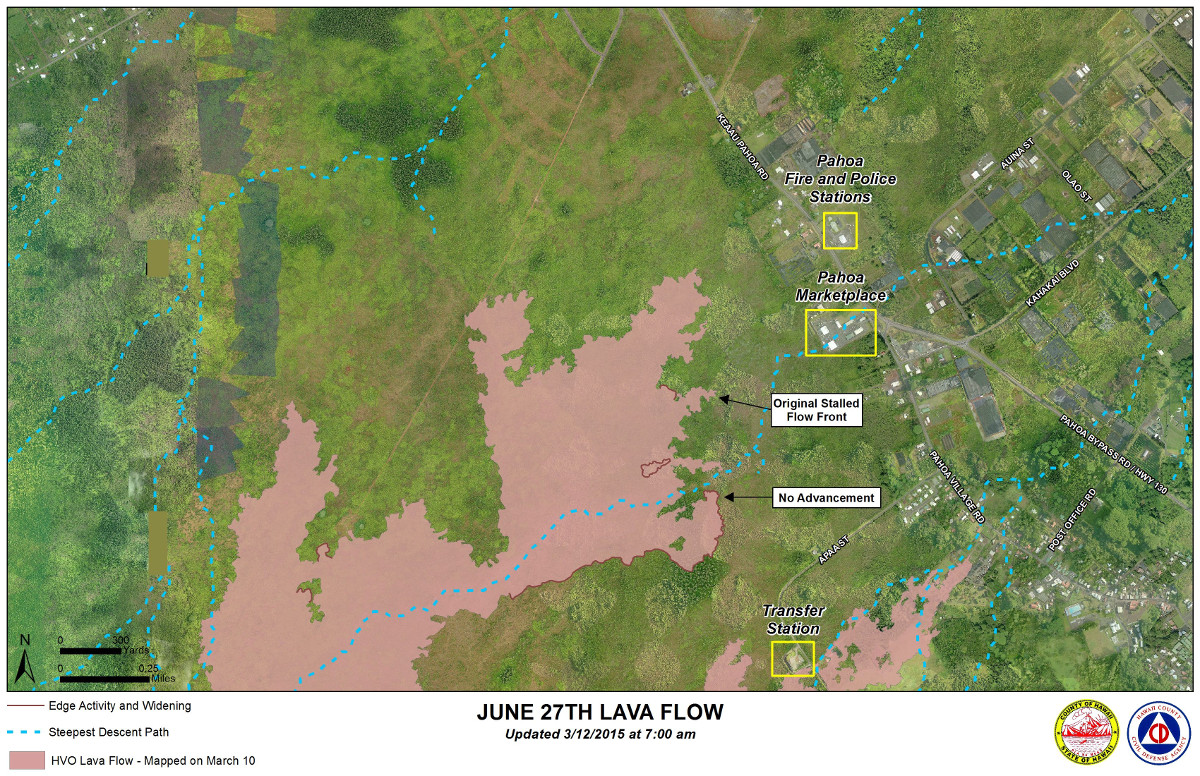 Surface activity and activity along both margins extending from the west or just above the stalled flow fronts to the summit area continues with numerous small breakouts. The surface breakouts along the length of the flow pad continues to provide an indication that the tube system is being supplied and lava from the source is making its way to the down slope areas. The small breakout along the south margin of the flow to the west or upslope of the stalled front showed no signs of activity and no advancement since yesterday. The leading edge of this breakout is approximately 0.6 miles to the west or mauka and upslope of Highway 130. All current activity does not pose an immediate threat to area communities. The Hawaii County Civil Defense Agency and Hawaiian Volcano Observatory are maintaining close observations of the flow and residents and businesses down slope will be informed of any changes in flow activity and advancement.

Smoke and Vog conditions were light to moderate with a light southwest wind blowing the smoke and vog in a northeast direction. Smoke and vog conditions may increase in some areas and individuals who may be sensitive or have respiratory problems are advised to take necessary precautions and to remain indoors.

Activity Summary: Kīlauea Volcano continues to erupt at its summit and from its East Rift Zone. On the East Rift Zone, the inactive distal tip of the June 27th lava flow remains roughly 500 meters (~550 yd) from Highway 130. Scattered breakouts continue behind the front. The breakout on the south margin that was active yesterday west of Pahoa Marketplace was reported by Civil Defense to be inactive this morning. Breakouts also continue in the upper portions of the June 27th flow, north of Puʻu ʻŌʻō. At the summit, the lava lake level rose slightly over the past day.

June 27th Lava Flow Observations: The June 27th lava flow remains active. The leading tip of the flow remains stalled 500 meters (~550 yd) upslope of Highway 130, with breakouts scattered in several areas upslope: 1) Scattered breakouts have been active a short distance behind the stalled tip, extending up about 3 km (roughly 2 miles) upslope of the stalled tip. The breakout on the south margin that was active yesterday west of Pahoa Marketplace was reported by Civil Defense as being inactive this morning, based on their overflight observations. 2) Minor breakouts have been observed recently west of Kaohe Homesteads. 3) An HVO overflight this morning observed two main areas of breakouts active north of Puʻu ʻŌʻō, with continued activity on the breakout (which started Feb 21) on the north flank of the cone and the breakout (which started a few days ago) near the forested cone of Kahauale‘a. The Feb 21 breakout on the north flank of the cone had a small surge of activity this morning around 3 am based on webcam views.

Puʻu ʻŌʻō Observations: Webcam images over the past day show no major changes in the crater, with a small lava pond observed on a recent overflight in the southern portion of the crater. The tiltmeter on the north flank of Puʻu ʻŌʻō shows no significant change over the past day. The rate of sulfur dioxide emission from all East Rift Zone vents was about 430 tonnes per day based on a measurement taken on March 6.

Summit Observations: The summit lava lake level rose slightly over the past day, but remained roughly 45-50 meters (150-165 feet) below the rim of the Overlook crater. Tiltmeters operating around the summit show inflationary tilt over the past day. Emission rates of sulfur dioxide averaged 1300-6700 tonnes/day for the week ending March 10.USGS Hawaiian Volcano Observatory on Mar. 12 at 9:57 a.m. HST