WASHINGTON, D.C. – West Hawaii will join two other areas in the Aloha State and three other locations across the United States as the first lands to be included in the federal Resilient Lands and Waters Initiative.

According to a joint news release by the U.S. Department Of Interior, the Environmental Protection Agency, and NOAA – the National Oceanic and Atmospheric Administration, the South Kohala / North Kona area of West Hawaii has been chosen for its “ongoing and active management schemes in place with participation from an extensive list of federal, state, and local government agencies as well as community and non-profit organizations.”

Also named in Hawaii is West Maui, and the He‘eia Watershed on O’ahu. Pacific Islands LCC has been named as the lead agency. 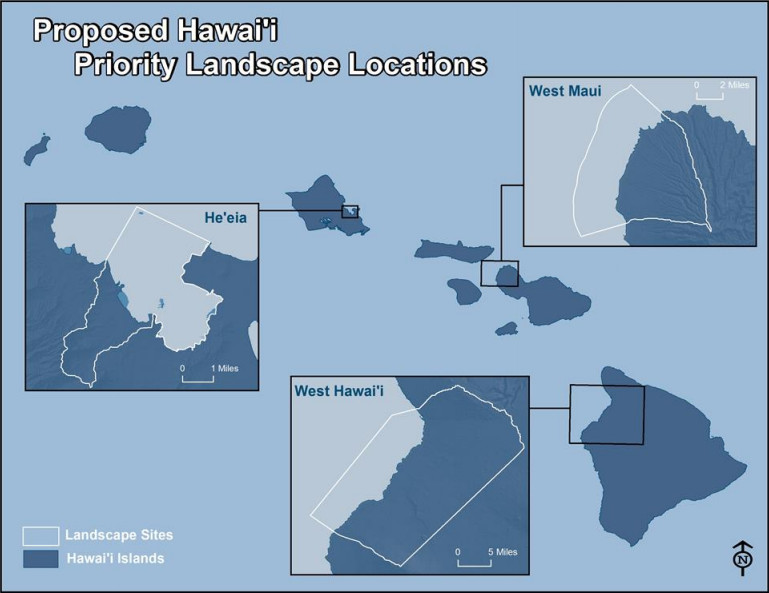 On the mainland, the list includes locations in Washington, Southwest Florida, and the Great Lakes.

The announcement comes as Hawaii Island struggles to come to terms with federal expectations regarding lands in West Hawaii. A U.S. Fish and Wildlife Service proposal to designate swaths of land in North Kona and South Kohala as critical habitat was met with resistance in 2013, and a National Park Service request to designate the Keauhou Aquifer a Ground Water Management Area under state control is opposed by Hawaii County officials and developers alike. Both situations are still under discussion. The National Park Service and U.S. Fish and Wildlife fall under the Department of the Interior.

The joint media release explains the initiative in greater detail:

As called for in the Administration’s Priority Agenda for Enhancing the Climate Resilience of America’s Natural Resources, Federal agencies worked with state, local, and tribal partners over the past six months to select a suite of geographic areas that will demonstrate the feasibility, practice, and benefits of landscape-scale management approaches toward building climate resilience through the use of existing, cooperative, inter-agency institutions and partnerships. These Resilient Lands and Waters represent a range of scales, geographies, and ecological stressors such as fire, sea-level rise, changing ocean conditions, and drought, and will focus on multiple community and ecosystem needs, such as coastal resilience, protecting drinking water for urban areas, improving wildlife habitat connectivity, and preventing threats like wildfire and invasive species. DOI, EPA, NOAA media release

The feds say West Hawaii’s Resilient Lands and Waters geographic area is not a formal designation that confers special legal or regulatory significance, but rather “highlights the partnerships on the ground and builds upon the work of existing landscape-scale collaboratives nationwide in order to demonstrate and advance the resilience benefits of this type of approach to planning and management.”

Like the other named locations, Hawaii has reportedly “committed to identify and map by October, 2016, initial priority areas for conservation, restoration, or other investments, to build resilience in vulnerable regions, enhance carbon storage capacity, and support management needs, and to follow upon those efforts by developing landscape-scale resilience strategies to assist in advance planning and management activities,” according to the joint news release.

The goal of the Resilient Lands and Waters Initiative is to put a national spotlight on these important efforts and demonstrate that by organizing at a landscape scale, Federal, state, tribal, and local partners are able to improve their ability to plan for the future and address climate impacts that respect no jurisdictional boundaries. By tracking the successes and lessons-learned from these efforts, this initiative will encourage the development of similar resilience efforts in other areas where such strategies may provide a path forward that advances conservation, restoration, and sustainable development in a rapidly changing environment.DOI, EPA, NOAA media release

President Barack Obama will be in Florida tomorrow to talk about the initiative, according to a White House press conference held Tuesday (video above)

Here is what the release says about Hawaii, specifically:

The three Hawaii locations chosen for this initiative have ongoing and active management schemes in place with participation from an extensive list of federal, state, and local government agencies as well as community and non-profit organizations. Each location is already designated a priority location by the State of Hawai‘i and NOAA. He‘eia is a NOAA Sentinel Site and the State is nominating it for inclusion in NOAA’s National Estuarine Research Reserve System. Several local non-profits are leading conservation efforts in He‘eia which include stream and wetland restoration, invasive species eradication, and fishpond restoration. West Maui is a State of Hawai’i and US Coral Reef Task Force designated priority area with a watershed restoration initiative led by a large, multi-stakeholder group including numerous federal agencies such as NOAA, FWS, NRCS, EPA, and USGS in partnership with the State, as well as community and local non-profit organizations. The State of Hawai‘i and the US Coral Reef Task Force have also designated South Kohala within West Hawai‘i as a priority area, which is a NOAA designated Sentinel Site location and Habitat Blueprint Focus Area. Priorities in West Hawai‘i include reef resilience, erosion and wildfire control, and dry forest restoration. West Maui and West Hawai‘i are also within National Marine Sanctuary boundaries.

While each location has slightly different participants and focus, they all incorporate robust community engagement and multi-sectoral partnerships in addressing a range of resilience options. Much of the work is utilizing existing tools and services while using new science and tools to understand climate vulnerability and develop management options. In He‘eia, organizations are using the NOAA Sea Level Viewer, reef resilience studies, and various reef and terrestrial invasive species removal techniques while also identifying new assessments needs for flooding and sedimentation. West Maui has an ongoing Ridge-to-Reef effort that has utilized PICCC’s analysis of projected vegetation changes under future climate scenarios as well as identifying key reef stressors, high erosion locations, and post-fire rehabilitation plans. West Hawai‘i is conducting similar reef resilience studies and erosion assessments while working to better prevent wildfire impacts, which will be exacerbated by climate change.

Selection as one of the Resilient Lands and Waters areas will help coalesce the many efforts around specific climate change-related issues in areas of high vulnerability. The improved coordination and maps will aid in the identification of new partnership opportunities and more effectively and efficiently address resilience across this network of sites. It will also help prioritize which climate change impacts are the most widespread and of greatest concern.DOI, EPA, NOAA media release