Hawaii Island's latest volcanic show continues, as the lava lake at the summit of Kilauea reached as high as 7 feet below the Overlook crater rim on Sunday.

HAWAII VOLCANOES NATIONAL PARK – Hawaii Island’s latest volcanic show continues, as the lava lake at the summit of Kilauea reached as high as 7 feet below the Overlook crater rim on Sunday. Visitors crowded the Jaggar Museum overlook inside the Hawaii Volcanoes National Park over the weekend to catch a glimpse.

Active spattering can be seen from the public overlook a safe distance away from the volcanic vent in Halemaʻumaʻu Crater. Prior to this week, the lava lake that characterizes the eight year eruption could only be seen on the webcams stationed around the summit.

The USGS Hawaiian Volcano Observatory had this update this morning:

Kīlauea’s summit continued to inflate slowly over the past day, accumulating a total of about 7.5 microradians since inflation started on Tuesday, April 21. The summit lava lake rose slightly since yesterday and is about 2 m (7 ft) below the Overlook crater rim (i.e., the floor of Halemaʻumaʻu Crater) this morning. Seismic activity beneath Kilauea’s summit and upper East Rift Zone remains elevated. Sulfur dioxide emission rates averaged 3000-5200 tonnes/day for the week ending April 21.USGS Hawaiian Volcano Observatory on April 27 at 7:15 a.m.

A look at the electronic tilt at 10 a.m. shows the inflation may have leveled off and is perhaps entering a slight deflation. The inflation has coincided with the rise of the lava lake.

On April 23, the lava lake rose to its highest point in the Halemaumau Crater vent since October 2012. The lava level continued to rise, and word spread about the increased activity. By the next night, the lava was 40 feet below the crater rim, and just barely visible from the museum. Visitors flocked to see.

Inflation continued, and on April 26, scientists with the USGS Hawaiian Volcano Observatory reported the lava was a mere 13 feet from the Overlook crater.

There has also been increased seismicity beneath Kilauea’s summit and upper East Rift Zone.

The National Parks of the Pacific blog posted some tips for dealing with the major surge in park visitation, especially from sunset through 9 p.m.

Park rangers encourage visitors to time their visit before or after the peak visitation. The park is open 24 hours a day, and arriving after 9 p.m. or before 5 a.m. ensures optimal viewing without frustrating traffic jams. Shortly after sunset on Saturday, April 25, a line of traffic was backed up almost two miles from Steam Vents to Jaggar Museum — the closest viewing point. Park rangers reported that visitors had to wait nearly 45 minutes before reaching Jaggar Museum, where many were re-directed to park at Kīlauea Overlook.National Parks of the Pacific blog 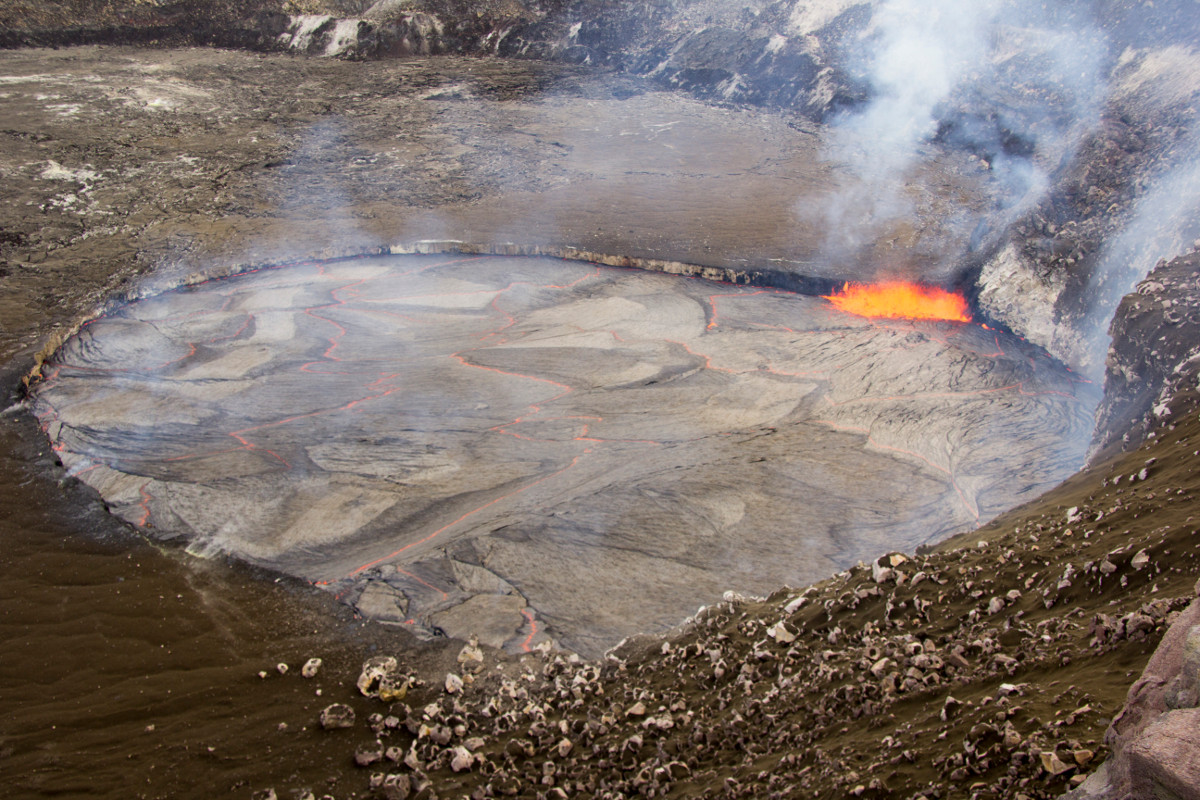 This USGS HVO photo shows a view of the lava lake, from a different perspective, when it was at its highest level.