NORTH KONA, Hawaii – The Hawaii County Department of Water Supply finds that there will be no significant impact from a proposed water production well in North Kona, even though its located in the contentious Keauhou Aquifer. The final environmental assessment has been published for the Forest City Hawaii Kona, LLC plan to convert an […] 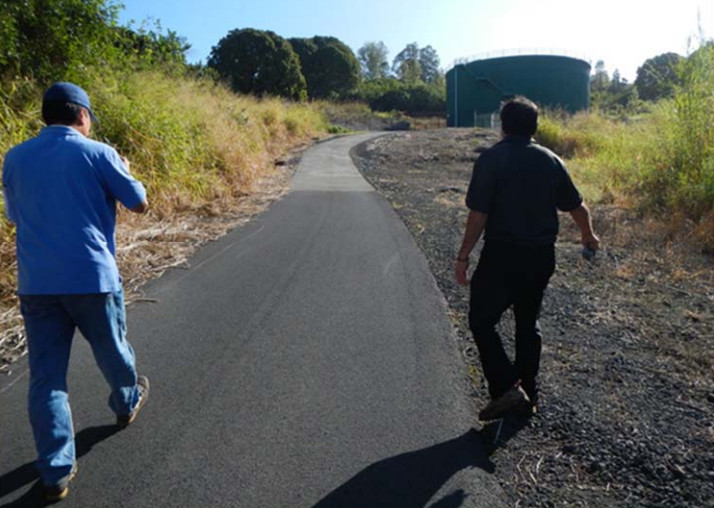 NORTH KONA, Hawaii – The Hawaii County Department of Water Supply finds that there will be no significant impact from a proposed water production well in North Kona, even though its located in the contentious Keauhou Aquifer.

The final environmental assessment has been published for the Forest City Hawaii Kona, LLC plan to convert an existing exploratory well, Keōpū Well #4, into a production well capable of producing up to 1.5 million gallons per day. Located along the Māmalahoa Highway, 3.3 miles south of the Māmalahoa Highway- Palani Road Junction, the well will serve as an additional source to the county water system. Forest City will use the well to supply the Kamakana Villages affordable housing development, planned in cooperation with the planned by the Hawaiʻi Housing Finance and Development Corporation. When completed, the new production well and associated control building, booster pump, and transmission lines will be turned over to the County DWS for full operation.

The project and well are located in the Keauhou Aquifer, which the National Park Service is currently seeking to designate as a ground water management area through a petition to the Commission on Water Resource Management (CWRM). The county and numerous developers with interests in North Kona are opposed to the designation. An agreement has not yet been reached. 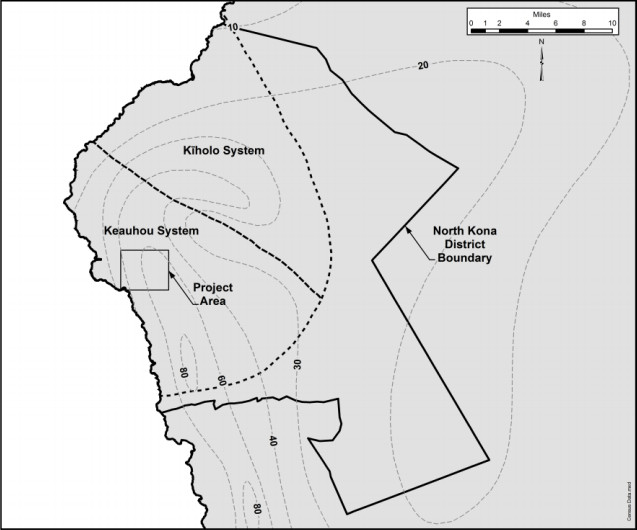 The environmental assessment goes into detail concerning the well’s impact to the sustainable yeild of the aquifer:

“The CWRM estimated recharge to the Keauhou System to be 87 MGD, and, assuming an entirely unconfined basal aquifer, the sustainable yield for the area would be 38 MGD (CWRM 2008). As noted above, a more recent study by the USGS using more sophisticated methods (Engott 2011) estimates the recharge rate at 152 MGD. Thus, together with the now proven existence of high level groundwater, the actual sustainable yield is considerably greater than 38 MGD.” – Keōpū Well #4 EA (Planning Solutions)

The document gets into greater detail in section 3.3.2 Potential impacts and Mitigation

“Pumping at the Keōpū Well #4 will result in a lowering of water levels in the project area. This effect is known as a “cone of depression” which establishes a “zone of influence” around the production well. Keōpū Well #4 was previously pump tested for four days at a constant rate of 1,458 gpm, or 2.35 MGD. The drawdown in the well was stable at 9.4 feet. The impact on the nearby existing DWS Keōpū production well (3957-01) was a resulting drawdown of 0.6 feet. A somewhat lower drawdown than this minimal impact can be anticipated when Keōpū Well #4 goes into production, since the design production rate will be only 1.5 MGD, rather than this test rate of greater than 2 MGD.

Another well in the immediate area of Keōpū Well #4 is the Douter Coffee #1 well, which is approximately 650 feet west and down-gradient from Keōpū Well #4. It is privately owned and was used for landscape irrigation purposes. CWRM records currently show no reported use of this facility, which has not been used since 2005 (TRNWE, personal communication to Charles Morgan, March 2014). Thus, no significant impacts on nearby wells are anticipated. Because the addition of 1.5 MGD to the existing withdrawal of water from the Keauhou Aquifer system will not increase the total withdrawals to more than 34 percent of the sustainable yield (13 MGD out of 38 MGD), no significant impacts to the aquifer will be caused.” – Keōpū Well #4 EA

Planners also foresee no significant impact on the basal lens in the aquifer, because “the evidence available to date does suggest that for the area down-gradient of Keōpū Well #4, most of the high level groundwater is passing below rather than into and through the basal lens.”