HAWAII: Ignacio is still a Category Four hurricane, with maximum sustained winds at 145 mph. Ignacio has likely reached peak intensity and will weaken through Monday, and is expected to pass to the northeast of the Big Island on Monday. 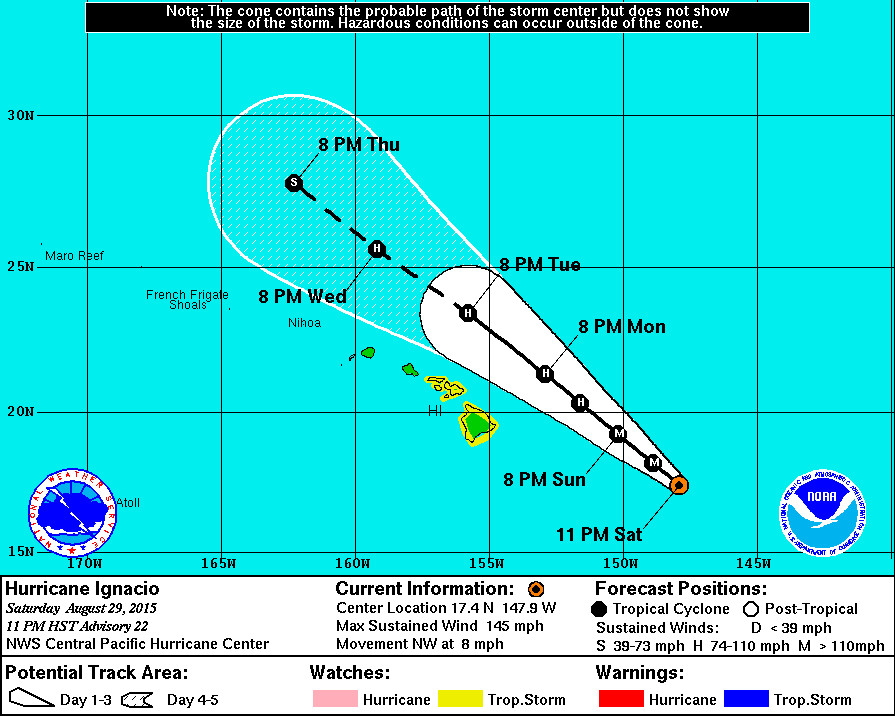 Ignacio presents a well-defined 20 nm wide eye with a deep convective canopy which has been steadily shrinking since 0600 utc. All three satellite centers derived subjective dvorak satellite intensity estimates of 6.0…115 kt…At 0600 utc. Uw-cimss adt was higher at 6.3 or 122 kt. However… Weather reconnaissance aircraft sfmr found 126 kt within the northeast eyewall during the second of three… Yes three… Center flythroughs. Splash wind corrected central pressure was found to be 942 mb…Lower than expected… On the first pass but 945 mb on the third pass. Both pressure estimates were lower than in the previous advisory. Ignacio likely reached a peak intensity of 125 kt as the aircraft was sampling its structure… And this will be the initial intensity for this advisory.

Forecast philosophy has changed little since the last advisory. Ignacio continues to track northwest… 315 degrees at 7 kt over the past 12 hours… Through a weakness in the mid-level ridge east of Hawaii and toward a weak trough located to the north of the northwestern Hawaiian Islands. The only challenge is that… In the shorter range… Three to six hours… There are hints of a more northerly motion. Like the last few runs… Track guidance this time remains tightly packed… Taking this hurricane almost in a straight line northwestward through the five-day forecast period. Hwrf and gfdl shifted a bit to the right… As did most consensus blends. However… The gfs shifted slightly left. We have consistently kept the forecast track along the left edge of the guidance envelope and we will do so this time as well. That said… The forecast track was shifted slightly to the right to account for the short term motion being a bit more northerly than 12 hour motion. This change is actually quite conservative… Keeping the track left of consensus and closely aligned with gfs. A 1 or 2 kt decrease in forward motion was also introduced through 36 hours… Not enough to change the status of tropical storm watches across the Hawaiian Islands.

Satellite loop shows shear is beginning to take its toll on this system… In spite of the intensity max likely reached a few hours ago. Outflow appears to be hindered to the northwest and the erosion along the western flank of the deep convective canopy seems to confirm the presence of increasing westerly shear. Ships intensity guidance depicts steadily increasing shear through 96 hours and the forecast calls for Ignacio to follow a weakening trend similar to that of the last advisory. We keep this system stronger than ships depicts through day five but weaker than depicted in dynamic models.

Ignacio will pass close enough to the main Hawaiian Islands to justify keeping a tropical storm watch in effect for the Big Island and the islands of Maui County.