A public meeting and hearing will be held at the Kealakehe High School Cafeteria on Thursday, February 11, 2016 on the subject of establishing the Ka‘ūpūlehu Marine Reserve. 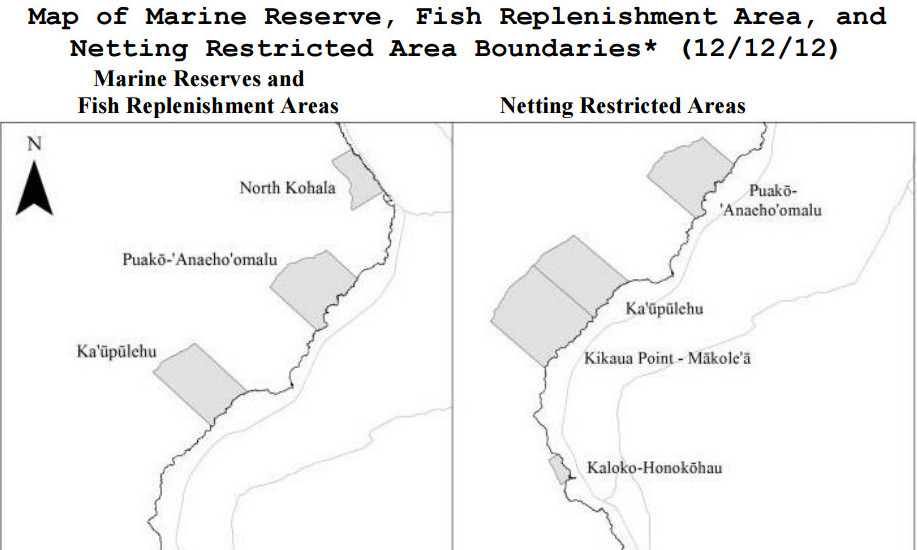 KONA, Hawaii – A public meeting and hearing will be held at the Kealakehe High School Cafeteria on Thursday, February 11, 2016 on the subject of establishing the Ka‘ūpūlehu Marine Reserve.

The new marine reserve, identified on shore to the north by the northern boundary of the Ka‘ūpūlehu ahupua‘a and to the south by the southern side of Kikaua Point, south of Kūki‘o Bay, will encompass the existing Ka‘ūpūlehu Fish Replenishment Area. The designation would create a 10-year nearshore “no take” zone, allowing for the recovery of reef fish stocks prior to the implementation of a subsistence fishery management plan for Ka‘ūpūlehu, according to the state Department of Land and Natural Resources.

According to the proposed rule changes, a marine reserve means “an area where any and all extraction of reef-related marine life, either alive or dead, or any portion of the reef structure, including coral, rocks, plants, algae, sand, shells, or any feature of the natural reef, shall be prohibited.”

Department may issue permits for the take of non-native or invasive species of fish and invasive algae from the
reserve, if established.

Under the new designation, kona crab “may be taken by kona crab nets only, while seaward of the twenty fathom (120 feet) depth contour.”

The informational meeting portion of the February 11 meeting will take place from 6:00 to 7:00 p.m. The formal public rulemaking hearing will be held from 7:00 to 9:00 p.m.

“All interested persons are urged to attend the public meeting and hearing to present relevant information and individual opinion for the DLNR to consider,” DLNR wrote. “Persons unable to attend or wishing to present additional comments, may mail written testimony by Friday, February 26, 2016 to the Division of Aquatic Resources (DAR); 1151 Punchbowl Street, Room 330; Honolulu, HI 96813.”