Above Photo: The explosive interaction of hot lava entering cool seawater throws spatter (clots of molten lava, visible at center of image) from the leading edge of the lava delta forming at Kīlauea’s Kamokuna ocean entry. This vigorous interaction also generates a billowy white “laze” plume composed of condensed seawater steam laced with hydrochloric acid and tiny shards of volcanic glass. The plume cloud is especially hazardous for visitors who, in an effort to see the ocean entry, venture beyond posted warning signs along the coast. (USGS photo)

HAWAII VOLCANOES NATIONAL PARK – The ocean entry hazards of Kīlauea volcano, in particular the plume created where lava meets the sea, is the subject of this week’s Volcano Watch.

Recent visitors to the Kamokuna ocean entry have been greeted with the spectacular sight of Kīlauea’s lava pouring into the sea to form some of the newest land on Earth. The vigorous interaction between molten lava (2,000 degrees Fahrenheit) and relatively cool seawater (around 80 degrees Fahrenheit) seldom fails to capture the imagination and engage the two particular senses of hearing and sight.

People who venture too close to the perilous beauty of an ocean entry, however, face real and present dangers.

As described in our July 28, 2016, Volcano Watch article, the lava delta comprising newly formed land at an ocean entry is extremely unstable. Delta collapses occur without warning, sometimes sending tens of hectares (acres) of the delta plunging into the sea. When this happens, it can trigger explosions that hurl rocks hundreds of meters (yards), both inland and seaward, and send huge waves of scalding water onto the coastline.

Worsening the hazard are the near-surface lava tubes directly inland of the coastal entry. These tubes transport molten lava from the vent to the ocean. The ground surface above them can be structurally weak in spots, which makes it dangerous to walk over them and causes the tubes to leak noxious sulfur dioxide gas.

Based on many years’ experience managing the lands where lava enters the sea, Hawaiʻi Volcanoes National Park staff take thoughtful actions to inform visitors about the dangers of ocean entries and to protect people from explosion and scalding hazards. For the current eruptive situation, the Park, working closely with USGS Hawaiian Volcano Observatory staff who study eruption hazards, has cordoned off areas that are likely to experience the most dangerous conditions.

A more benign-appearing hazard than the lava delta is the ocean entry plume, or steam cloud, that drifts downwind of where lava meets the sea. But don’t be deceived by its innocuous appearance—this hazard is one with potentially far-reaching effects.

This “laze” (short for lava haze) plume, a byproduct of the lava-ocean interaction, is formed as hot lava boils seawater to dryness. The process leads to a series of chemical reactions that result in the formation of a billowing white cloud composed of an irritating mixture of condensed, acidic seawater steam, hydrochloric acid gas, and tiny shards of volcanic glass. Visitors should avoid this plume, as even the wispy edges of it can cause skin and eye irritation and breathing difficulties.

Once formed, the effects of the laze plume are literally blowing in the wind. During prevailing trade wind conditions—normally greater than about 80 percent of the year—air flow from nighttime through early morning carries this noxious ocean entry plume off shore and out to sea. This is good news for coastal entry visitors who approach the lava flow field from the end of the National Park’s Chain of Craters Road (the west side of the ocean entry).

By contrast, from mid-morning through late afternoon, trade wind flow on Kīlauea’s south flank carries the plume onshore and along the coast, resulting in poor air quality for National Park visitors hoping to catch the ocean entry lava show. During the along shore intervals, the chances of clearer viewing conditions are greater if visitors approach the ocean entry from the Kalapana (east) side, rather than from the west.

Regardless of the direction the wind is blowing, visitors to the ocean entry need to be mindful of all of the hazards present at the coastal entry and should vigilantly watch for changing conditions. Enjoy the beauty, but mind the hazards—and heed all warning signs! 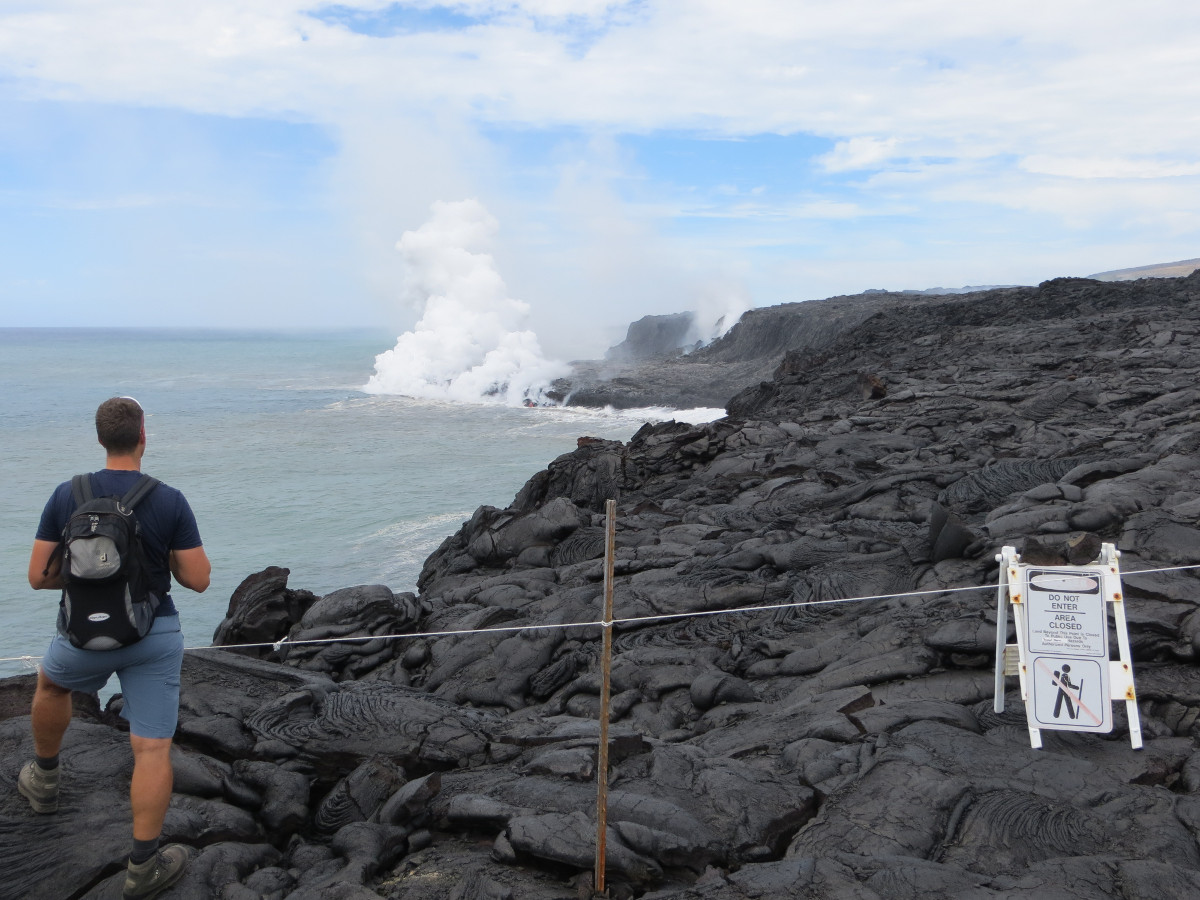 The eastern Kamokuna lava delta shows lava dribbling into the sea and a closer view of the ocean entry plume. (USGS photo)