Rise & Fall Of Volcano Lava Lake: What Does It Mean? 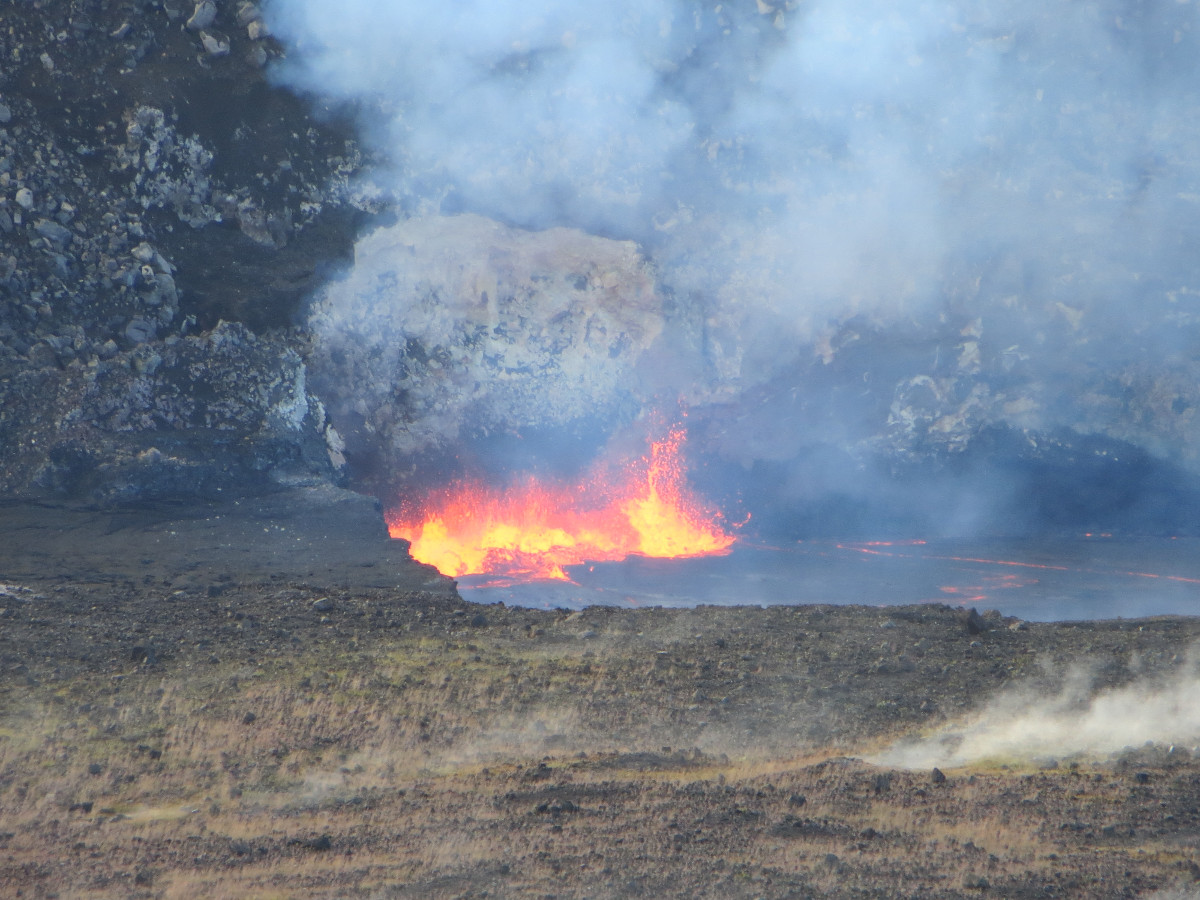 This telephoto image provides a closer view of the lava lake within Halemaʻumaʻu Crater and spattering on the lake surface. (USGS photo)

HAWAII VOLCANOES NATIONAL PARK – The lava lake at the summit of Kīlauea has been high all month, rising and falling slightly with the inflation / deflation of the volcano.

Today, the lava lake is at least 33 feet below the floor of Halemaʻumaʻu. The measurement was made this morning, after summit tiltmeters began recording a deflationary trend starting at about 4:00 a.m.

Scientists with the USGS Hawaiian Volcano Observatory say the lava lake surface raised about 13 feet over the past day, and was still visible from Jaggar Overlook this morning.

What’s happening and what does it mean? That’s the question pondered by USGS scientists and affiliates in this week’s Volcano Watch article:

This magma accumulation is also reflected—quite visibly for visitors at the Jaggar Museum Overlook in Hawaiʻi Volcanoes National Park—by periodic, and sometimes rapid, rises of the lava lake within Halemaʻumaʻu Crater. When the lake level is high, vigorous spattering on the lake surface creates a dazzling display, especially after dark, when the incandescent lava lights up the night sky.

Long-time volcano watchers have likely noticed that Kīlauea’s summit lava lake rises and falls in concert with summit inflation and deflation. During the last half of 2015, the lava lake level generally fluctuated between about 40 and 70 meters (131-230 feet) below the rim of the vent on Halemaʻumaʻu Crater’s floor.

Throughout 2016, the lava lake level has typically varied between 20 and 40 meters (66-131 feet) below the vent rim. That is, until early September, when the increased rate of inflation resulted in higher lake levels.

On September 10, the summit lava lake rose to within 5 meters (16 feet) of the vent rim, but dropped the next day with the onset of summit deflation. Since then (as of September 22), the lava lake level has fluctuated between 10 and 28 meters (33-92 feet) below the rim, rising and falling with periods of inflation and deflation—and thrilling Park visitors who happen to see the lake during one of its high stands.

Like those visitors, HVO staff enjoy the beauty of Kīlauea’s lava lake activity. But, as scientists, we also ponder what it means.

It’s impossible to know the exact outcome(s) of a pressurized magma reservoir. We have, however, identified possible scenarios based on recent observations and past similar events.

For example, given long term trends and current conditions at Kīlauea, we expect summit inflation and elevated earthquake activity to continue. With inflation, we also anticipate periodic high lava lake levels—possibly with lava overflowing the vent rim and spreading across the floor of Halemaʻumaʻu Crater, as happened in April-May 2015.

Intermittent rockfalls in the summit vent are also expected. Rocks falling from the vent walls and into the lava lake can initiate explosions that send spatter (clots of molten lava), solid rock fragments, and bits of volcanic glass (ash, Pele’s hair, Pele’s tears) flying into the air. During past explosions, spatter and solid rocks up to a meter (yard) or more in size have been thrown onto the rim of Halemaʻumaʻu Crater. These hazardous explosions occur suddenly and without warning—as recently as September 19—one reason why Halemaʻumaʻu has been closed to the public since February 2008.

If a lava lake explosion occurs under southerly wind conditions, tiny particles of volcanic glass and pulverized rock could be blown toward Jaggar Museum and other viewing areas. This could result in a “dusting” of Pele’s hair and gritty ash at Park overlooks.

The summit vent continues to emit sulfur dioxide and other volcanic gases that produce poor air quality downwind from the lava lake. But closer to the vent, along the Halemaʻumaʻu Crater rim, gas concentrations are potentially life-threatening—the main reason why this area remains closed to the public.

Inflation of Kīlauea’s summit reservoir increases the chance of magma intruding into the volcano’s south caldera or upper rift zones. Such an intrusion would likely result in a rapid drop in the summit lava lake, and could cause new breakouts of lava, like the 2011 Kamoamoa fissure eruption. If the magma supplied to Pu‘u ‘Ō‘ō increases, changes in the 61g lava flow and Kamokuna ocean entry could occur.

HVO scientists closely watch Kīlauea for any signs of an intrusion—changes in deformation and seismicity—that might precede a new breakout of lava. HVO’s monitoring instruments are programmed to rapidly alert us—day and night—to sudden changes on the volcano.

It’s an exciting and interesting time on Kīlauea—for both the public and the scientists who study the volcano. If you’re unable to visit in person, you can still follow the lava lake’s rise and fall through HVO’s daily updates and recent photos posted here