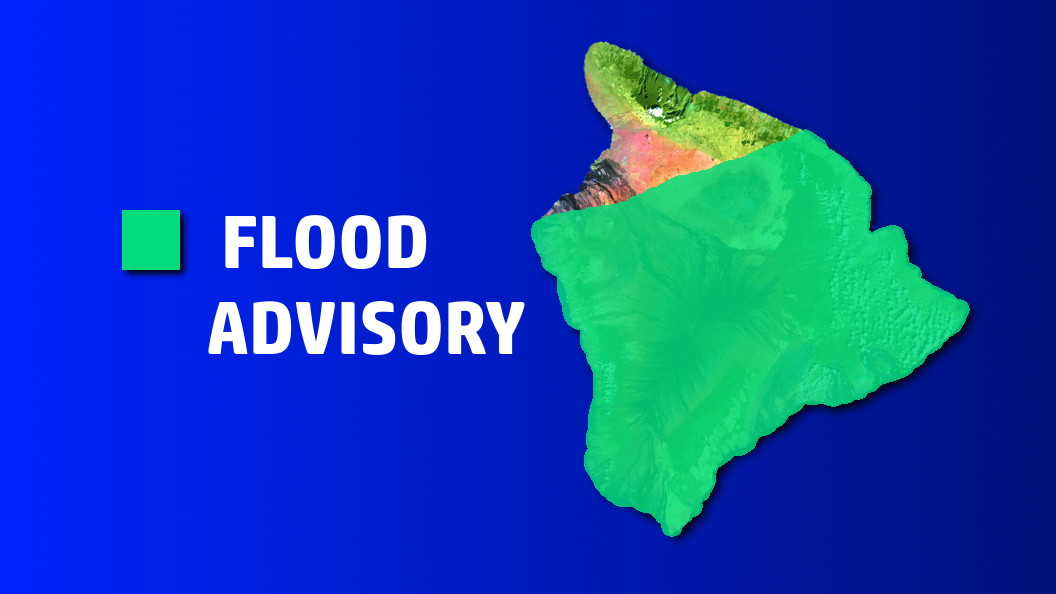 HAWAII ISLAND – The National Weather Service in Honolulu has issued a Flood Advisory for the island of Hawaii in Hawaii County.

UPDATE: At 3:30 p.m. HST, forecasters say “radar indicated a continuous stream of light to moderate rain moving over the Big Island from the south, primarily affecting the Kau, Puna, Hilo and Hamakua districts. A few heavy showers and thunderstorms are embedded within the large area of rain, and will occasionally and briefly produce rainfall rates near two inches per hour. Although the rain has been falling for hours, Big Island Civil Defense reports that significant flooding is not occurring.” The National Weather Service has extended the Flood Advisory for Hawaii Island until 6:30 p.m.

UPDATE: At 12:35 p.m. HST, radar indicated that rain was gradually easing over most of the Big Island. “However,” forecasters stated, “runoff from earlier rainfall continues. Additionally, heavy showers with embedded thunderstorms are expected to continue to move over the Puna and South Hilo districts from the south, with rainfall rates as high as two inches per hour.”

UPDATE: At 11:25 a.m. HST, forecasters reported “radar indicated that a large area of light to moderate rain continued to move over the Big Island from the south, with some embedded heavy showers and thunderstorms. Heaviest showers, and isolated thunderstorms with rainfall rates as high as two inches per hour, will impact the Puna district.”

UPDATE: At 9:35 a.m. HST, forecasters reported “radar indicated a large area of light to moderate rain moving over the Big Island from the south, with some embedded heavy showers and thunderstorms. With rainfall now having occurred for several hours, streams are elevated and running higher than normal, and ponding of water is also occurring in low-lying areas.” The Flood Advisory has been extended to 12:45 p.m. HST. A Winter Storm Warning has also been issued for Big Island summits.

At 6:40 a.m. HST, forecasters say radar indicated moderate to heavy rain over portions of The Big Island. Rain was falling at a rate of 1 inch per hour.

“Stay away from streams, drainage ditches and low lying areas prone to flooding,” forecasters warn. “Rainfall and runoff will also cause hazardous driving conditions due to ponding, reduced visibility and poor braking action. Do not cross fast flowing or rising water in your vehicle, or on foot. Turn around, don`t drown.”

“Deep tropical moisture surged west across the Big Island to Maui,” the NWS reported Sunday morning. “This batch of tropical moisture has been sitting off the eastern shores of the Big Island even before a cold front moved through the islands about Thursday of last week. The models have been going back and forth in spreading this field westward. This has now finally happened.”

A High Wind Warning and Winter Weather Advisory is also in effect for the summits of Mauna Kea and Mauna Loa.