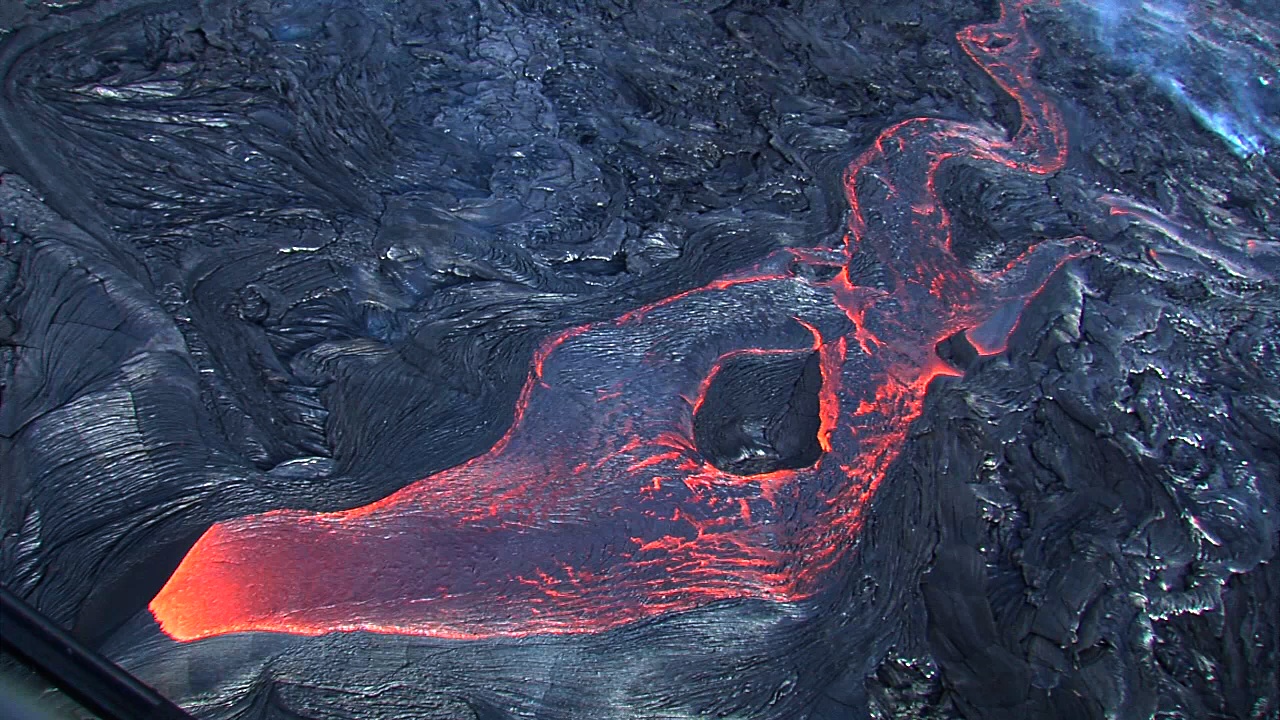 HAWAII VOLCANOES NATIONAL PARK (BIVN) - The May 24 breakout on the flank of Puʻu ʻŌʻō led to a spectacular new lava ocean entry in July. USGS describes the year of activity in this week's Volcano Watch article.

HAWAII VOLCANOES NATIONAL PARK – The 61g lava flow that erupted from the flank of Puʻu ʻŌʻō in May 2016 was the focus of a year-end Volcano Watch article by the USGS Hawaiian Volcano Observatory.

The change in Kilauea’s East Rift Zone eruption was welcome news for residents of Puna.

“When 2016 began, lava was erupting from the June 27th vent on the north flank of the Puʻu ʻŌʻō cone,” the Volcano Watch article states. “This was the same vent that fed flows toward Pāhoa in 2014 and early 2015. During late 2015 and early 2016, however, the vent fed surface breakouts over a broad area up to about 8 km (5 mi) northeast of Puʻu ʻŌʻō. These flows were upslope from communities in the island’s lower Puna District, but were relatively weak and posed no threat to infrastructure.”

“As 2016 progressed, lava also began to erupt within the small crater atop Puʻu ʻŌʻō, suggesting that more magma was arriving at Puʻu ʻŌʻō than was being erupted,” USGS wrote.

On May 24, 2016 in two new breakouts occurred on the north and east flanks of the Puʻu ʻŌʻō cone. USGS had the first video of the dramatic event.

“The June 27th flow northeast of Puʻu ʻŌʻō gradually stagnated and ceased over the following week,” USGS wrote. “The northern May 24 breakout at Puʻu ʻŌʻō, called episode 61f, was dead by June 4. But the eastern breakout, called episode 61g, captured the entire output from Puʻu ʻŌʻō and kept going.”

“Lava advanced downslope to the southeast, initially at rates of up to several hundred meters (yards) per day, and reached the top of the Pūlama pali on Kīlauea’s south flank in late June,” the article states.


Even before the lava reached the base of the pali, the crowds came to Kalapana.


“Spectacular channelized ʻaʻā flows were visible for the next several days as lava streamed down the pali and puddled at its base,” the latest Volcano Watch article describes. “By early July, the 61g flow was back on the move and headed toward the ocean. Lava crept across the coastal plain over the following weeks and crossed the gravel emergency access road (constructed in 2014 when flows were threatening Pāhoa) on July 25. The 61g lava flow reached the ocean early the next day and began to build two lava deltas, known as the eastern and western Kamokuna ocean entries.”


“The western, and weaker, of the two lava deltas grew to about 6 acres in size before it was abandoned in late September,” reads the latest Volcano Watch article. “The eastern Kamokuna lava delta persisted, however, and by the end of 2016 was about 26 acres.”

“Kīlauea’s East Rift Zone eruption settled in to a relatively consistent pattern of behavior this past year,” USGS writes. “Lava erupted from the Pu‘u ‘Ō‘ō vent was carried downslope through a lava tube, where it emptied into the ocean. Occasionally, short-lived breakouts of lava occurred along the tube, creating surface flows.

In a few instances, more substantial breakouts occurred from the vent itself, burying the upper end of the 61g flow field beneath new lava. The largest of these breakouts, to date, occurred on November 21, and sent lava to the east of Pu‘u ‘Ō‘ō. This breakout was still active as of late December, advancing slowly—a few tens of meters (yards) per day—to the southeast along the edge of the older 61g flow. The 61g flows currently pose no threat to Puna communities.

As the New Year begins, we see no indication that Kīlauea’s East Rift Zone eruption is about to change significantly or stop. This leads us to wonder, will it outlast another generation?”