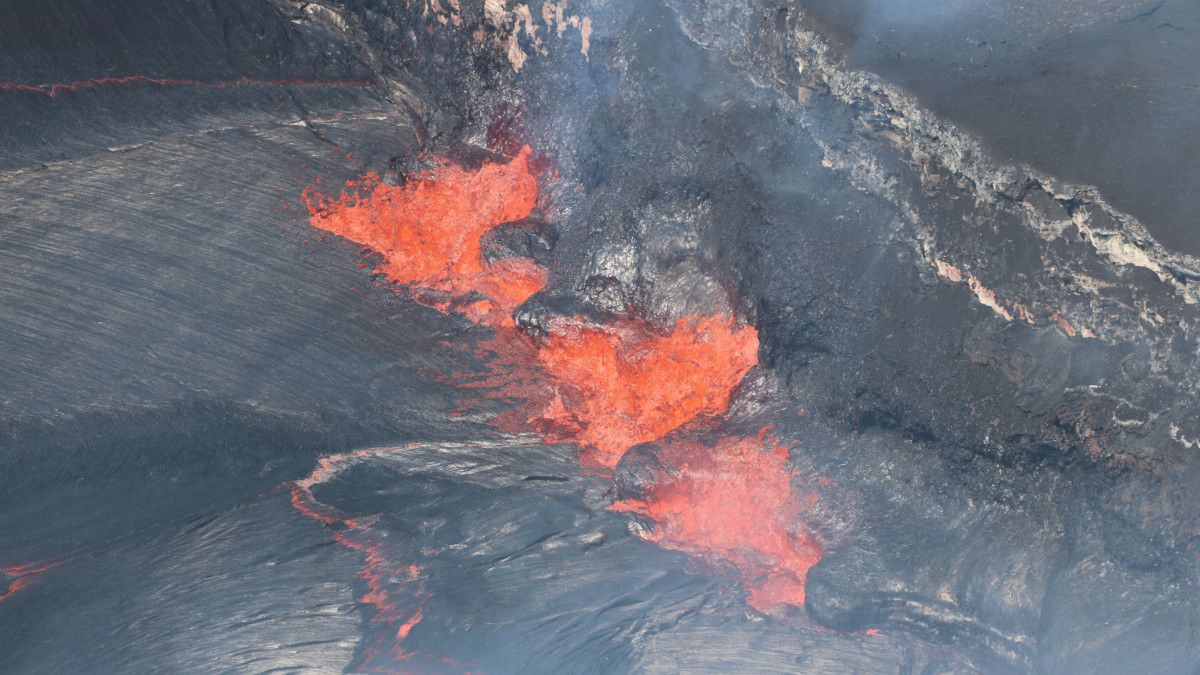 HAWAII VOLCANOES NATIONAL PARK (BIVN) - Observations have given rise to a new concept in understanding the volcanic activity ongoing at Kīlauea. 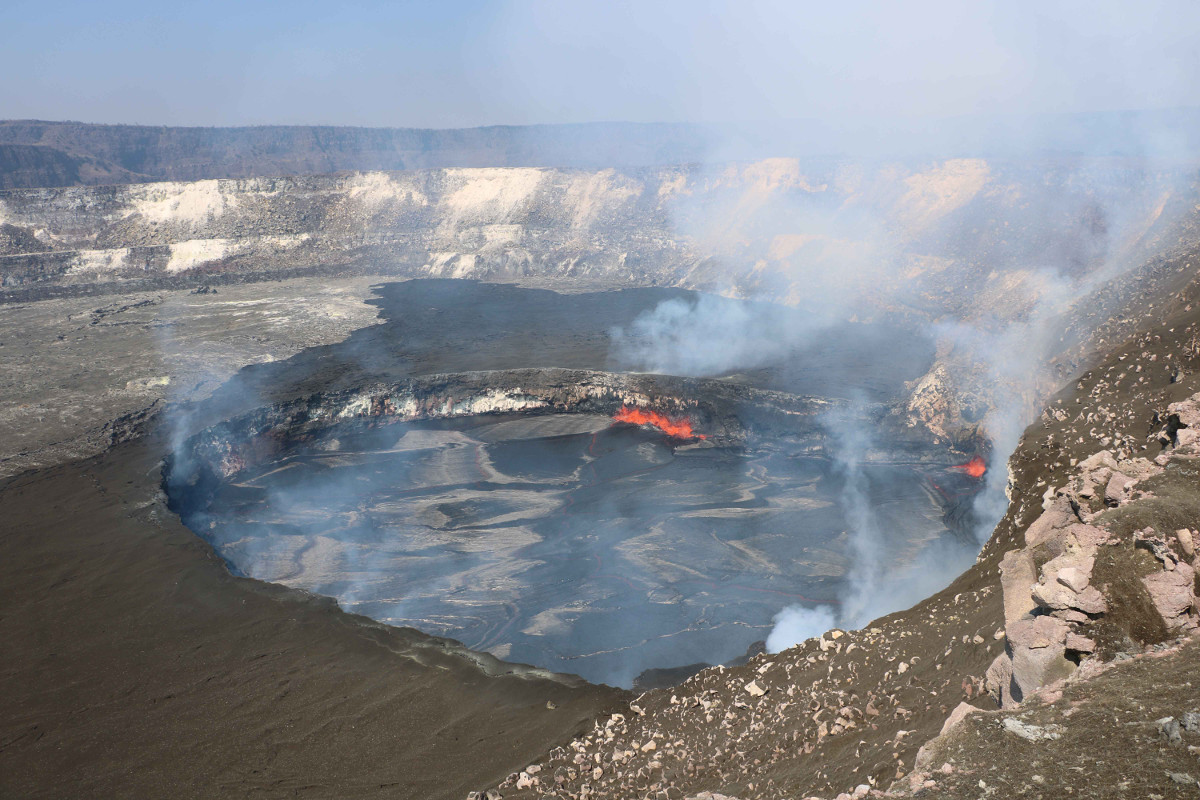 (USGS) A Valentine’s Day 2017 view of Kīlauea Volcano’s summit lava lake, here the surface of the lake is about 21 m (69 ft) below the vent rim. The lake diameter is about 255 m or 840 ft. Careful tracking of the amount of ash emitted by lake processes suggest an important new into the supply of magma to Kīlauea’s summit.

This is the story of how a new concept — slowly pulsing magma supply to Kīlauea — emerged from observations of the Overlook lava lake in Halemaʻumaʻu.

Every weekday volcanic ash is collected from 10 buckets near the lava lake. Gas bubbles in the lake pop, and pieces of the skin – such as Pele’s hair and tears – fly into the air, and the buckets catch them. The ash is weighed, and an ash accumulation rate is calculated – how many grams of ash fall into the buckets per hour.

Bubbles are almost always breaking – a process called spattering – but the rate at which ash accumulates in the buckets varies. There are several reasons for this – wind direction, locations of spattering, depth to the lava lake, and more. But, when averaged over a month, such short-term effects tend to cancel, and we see month-to-month variation, with peaks and troughs in ash accumulation lasting several months each. Does this relate to anything else that we can measure?

Yes. Almost daily, we measure the depth to the lake surface with a laser rangefinder. Lake level rises during summit inflation and drops during deflation. Such changes typically last a day or two, sometimes longer, but not for a month.

It turns out that the average monthly lake level and the monthly accumulation of ash track each other. Over a several-month period, lake level and ash accumulation may rise, peak, and fall off. More ash falls in the buckets when lava level is high than when it is low. The closer bubbles are to the buckets, the more ash. Simple.

But why does the monthly average lake level change over periods of several months? We think we’ve found an answer—a pulsing rate of magma supply to the shallow storage reservoir under the caldera.

Generally, magma supply to Kīlauea is considered to be pretty steady. For 3-4 years about a decade ago, the magma supply rate was higher than it is today. This was a long-term change and stood out by its magnitude and duration.

But now, the rising and falling lava lake over periods lasting only several months suggests a shorter-term variation in the supply rate. How can we check this idea?

The simplest explanation for all this is that the rate of magma supply is slowly pulsing over periods of several months. It isn’t simply a question of transferring magma from one place in the summit to another, like robbing Peter to pay Paul. The entire summit goes up or down, seemingly reflecting waxing and waning of the magma supply rate to the entire summit reservoir. Only once, in 2012, did the southern part of the reservoir go down when the northern went up—the Peter-Paul effect.

We’ve identified about a dozen pulses since the Halemaʻumaʻu eruption began in 2008. The pulses may be driven by changes in the rate of melting in the mantle or be induced during transport upward from the mantle to the shallow storage reservoir, an 80-100-km (50-60 mile) distance.

Without the lava lake and its precisely measured level, we probably wouldn’t have detected a pulsing supply rate. And, the only reason that we looked at lake level at this scale was to explain the monthly changes in ash accumulation. Research is full of surprises, and seemingly minor observations can have major ramifications!