WASHINGTON D.C. (BIVN) - Tensions are high between the United States and North Korea, and Hawaii is in the middle. Here is what Sean Spicer had to say at today's press briefing.

WASHINGTON D.C. – The White House responded on Monday to questions over Hawaii’s concern of a possible nuclear weapons attack from North Korea.

Roberts asked, “Does the President believe that the level of tension between the United States and North Korea is at the point where we should start reviewing emergency attack plans?”

Spicer responded that “there are military contingency plans for almost every scenario, in numerous aspects around the world, here at home — everything from humanitarian relief to refugee crises, to attacks. That is standard military procedure to have those kinds of things. So to make that in any way, shape or form sound new would be a mistake.”

“It is a standard operating procedure of the military to plan for contingencies in a number of operations, in a number of hotspots throughout the world on a regular basis,” Spicer said. “And with respect to Korea, in particular, that’s been going on for decades.” 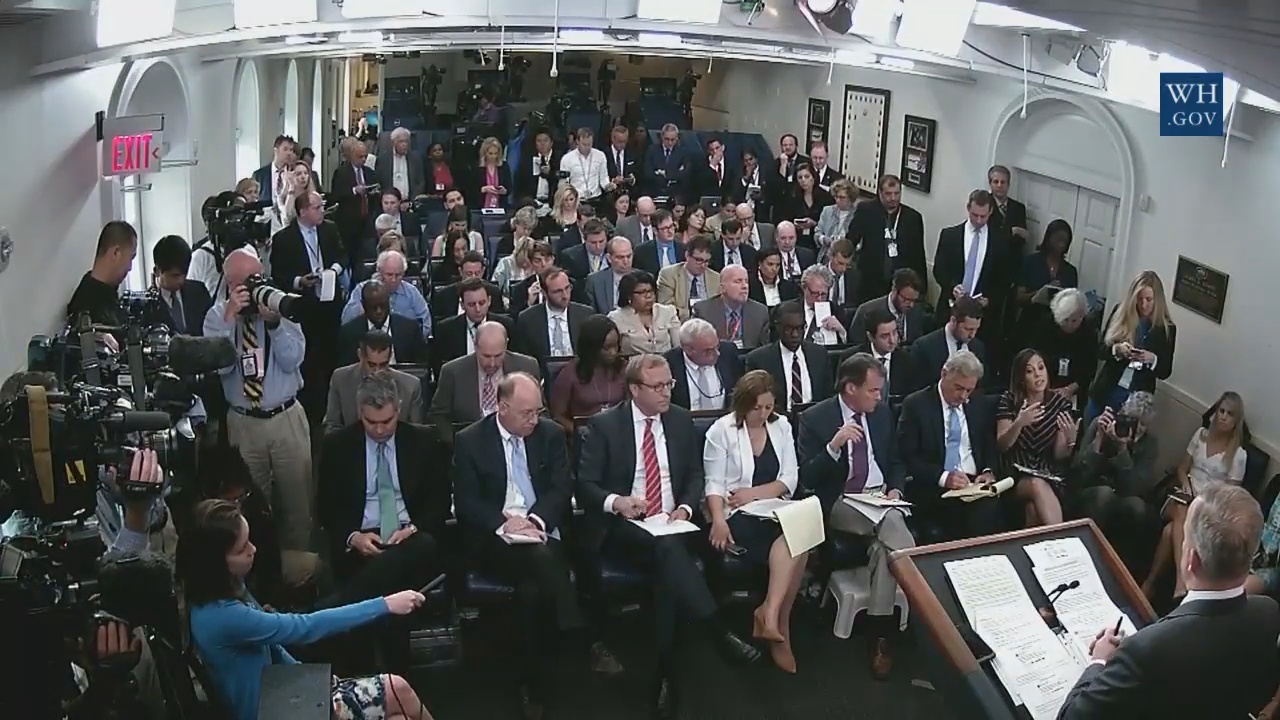 On April 13, Hawaii’s State House Public Safety Committee held a public hearing before voting to advance a resolution urging the state Department of Defense “to update and modernize Hawaii’s disaster preparedness plans, as the current state of geopolitical tensions between North Korea and the United States make Hawaii a vulnerable and strategic target for a nuclear weapons.”

REQUESTING THE STATE TO MODERNIZE ITS DISASTER PREPAREDNESS PLANS.

WHEREAS, Hawaii faces increased risks from natural and man-made disasters mainly because of environmental climate changes and geopolitical conflicts; and

WHEREAS, Hawaii’s prime location in the middle of the Pacific Ocean and its abundance of military commands, including the United States Pacific Command, which is responsible for military operations in an area covering more than half of the earth’s surface, makes the State a strategic target; and

WHEREAS, nuclear arms experts recently said that North Korea already has, or may soon have, the ability to target Hawaii with a nuclear-tipped intercontinental ballistic missile with possibly the same destructive force as the 15-kiloton and 20-kiloton bombs dropped on Hiroshima and Nagasaki, respectively, according to a Honolulu Star-Advertiser article; and

WHEREAS, the Legislature finds that airborne electromagnetic pulses radiating from a nuclear disaster may have a radius of approximately 1,500 miles and could adversely affect the operation of electronic devices statewide, rendering many of these devices unusable; and

WHEREAS, under the current state of geopolitical tensions affecting the United States, it is in the best interest of Hawaii to prepare for a nuclear disaster by updating its fallout shelter plans, including identifying useable fallout shelters and upgrading outdated fallout shelters; and

WHEREAS, the Legislature finds that in 1981, Oahu had hundreds of fallout shelters with many stocked with medical kits, food, and sanitary kits, but eventually funding stopped, stocks were discarded, and existing fallout shelter markings became outdated and no longer applicable; and

WHEREAS, in addition, if a natural or man-made disaster were to strike Hawaii’s cargo shipping harbors, the State would suffer great hardship since most of the State’s food and other supplies arrive by ship; and

WHEREAS, on Oahu, an emergency backup container lay down area should be available in case Pearl Harbor Naval Shipyard, Kalaeloa Barbers Point Harbor, or any other major harbor capable of handling shipped cargo is severely damaged and unusable; and

WHEREAS, the proposed redevelopment of Aloha Stadium in Halawa provides a good opportunity to build a reinforced stadium parking lot that may serve as the emergency backup container lay down area that is centrally located, accessible by tractor trailers, equipped with additional power generators, and capable of holding shipping containers, withstanding heavy machinery, and accommodating harbor employees; and

WHEREAS, it is also important for the State to identify an alternate long-term port that may be on a neighbor island to be used as an emergency backup port if a natural or man-made disaster impacts major harbors; and

WHEREAS, an effective and modernized disaster preparedness plan should have input from various stakeholders, including those from the government, emergency and civil defense agencies, maritime and shipping industry, and other relevant personnel; and

WHEREAS, preparing for natural and man-made disasters is important to the State and taking early precautions can save lives and protect property; now, therefore,

BE IT RESOLVED by the Senate of the Twenty-ninth Legislature of the State of Hawaii, Regular Session of 2017, the House of Representatives concurring, that the Department of Defense, with assistance from relevant stakeholders, is requested to modernize its disaster preparedness plans; and

BE IT FURTHER RESOLVED that the State is requested to update its fallout shelter plans in case of a nuclear disaster by:

(3) Updating fallout signage and markings, restocking fallout shelter provisions, and conducting public awareness campaigns to ready the public for a nuclear disaster; and

BE IT FURTHER RESOLVED that the State is requested to include in its proposed Aloha Stadium redevelopment plans a reinforced stadium parking lot that may serve as an emergency backup container lay down area that is accessible by tractor trailers, equipped with additional power generators to power refrigerated shipping containers and emergency equipment, and capable of holding shipping containers, withstanding heavy machinery, and accommodating harbor employees; and

BE IT FURTHER RESOLVED that the State is requested to identify an alternate long-term port that may be on a neighbor island to be used as an emergency backup port if a natural or man-made disaster impacts major harbors; and

BE IT FURTHER RESOLVED that the Department of Defense, with assistance from relevant stakeholders, is requested to report its findings and recommendations on modernizing the State’s disaster preparedness plan, including any proposed legislation, to the Legislature no later than twenty days prior to the convening of the Regular Session of 2018; and

BE IT FURTHER RESOLVED that certified copies of this Concurrent Resolution be transmitted to the United States Secretary of Homeland Security, Commander of the United States Pacific Command, Commandant of the United States Coast Guard, Acting National Oceanic and Atmospheric Administration Administrator, Governor, Adjutant General, Hawaii Fusion Center Coordinator, Hawaii Emergency Management Agency administrator and Executive Officer, Director of Transportation, the mayors of each of the counties, President of the International Longshore and Warehouse Union, and Chairperson of the Stadium Authority.

Tensions have risen on Korean Peninsula, as Pyongyang continues warnings and bellicose rhetoric, and the Trump administration declared an end of a “strategic patience” policy.

The USS Carl Vinson carrier-led Navy strike group was sent to the Korean Peninsula, as the Democratic People’s Republic of Korea appeared ready to test a nuclear weapon.

North Korea’s missile arsenal was paraded through the streets during the April 15 “Day of the Sun” holiday, celebrating the birthday of Kim Il-sung, 46-year “supreme leader” of North Korea and the grandfather of current dictator, Kim Jong-un.

Reporter Roberts asked Spicer “how high does the President view the threat level from North Korea?”

“I think the President has made clear we’re aware of the activities that they’ve engaged in, and we’re monitoring them,” Spicer said. “And the national security team continues to keep him up to date.”

Spicer responded that “taking anything on or off the table is in itself limiting your options to some degree,” and so he was “not going to even discuss that.”