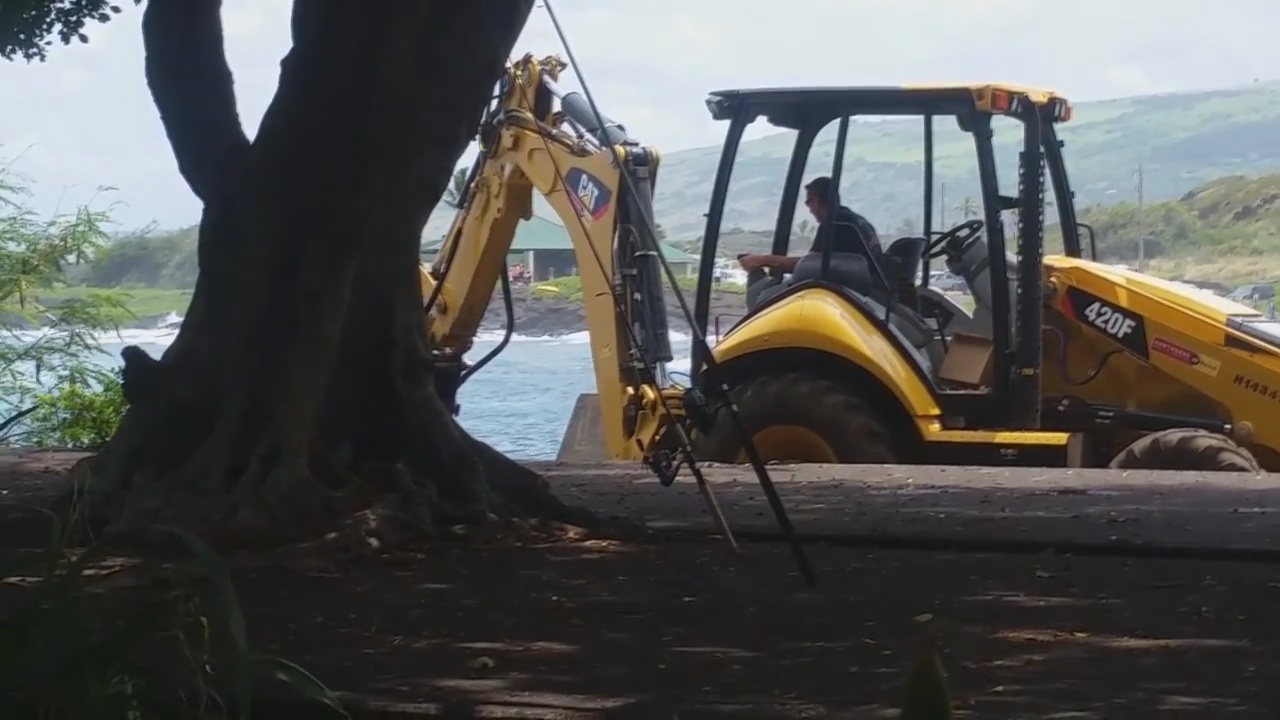 (BIVN) – The tour boat company that allegedly tried to create a new boat ramp on the 100-year-old wharf at Punalu‘u officially stands accused of “Unauthorized Alteration of Historic Properties and Unauthorized Land Use Within the Conservation District”, according to the State of Hawaii.

Today, the Department of Land and Natural Resources issued a Notice of Alleged Violations to Simon Valej of Hang Loose Boat Tours, a media release stated. “A site inspection conducted on June 26, 2017, revealed remnants of the historic Punalu‘u Wharf have been impacted allegedly with heavy equipment, and significant ground disturbance has occurred with the State Land Use Conservation District,” the state reported.

The situation received state-wide attention over the weekend, thanks in part to a viral series of Facebook live videos taken by Pahala resident Demetrius Oliveira that documented the tense confrontation that followed Valej’s alleged actions.

The community inquiry into the legality of the work put state and county officials on the track, looking for permits that apparently did not exist. A notice of the cancellation of the License Agreement between area land owners S.M. Investment Partners and Hang Loose Boat Tours seemed to indicate that the tour company not only lacked landlord approval, but also did not have the required permits from the state and/or county government.

Today was the first official statement from the state on the matter. In the Notice of Alleged Violations sent to Mr. Valej, DLNR Chair Suzanne Case writes, “This notice is to inform you that the alleged alteration and destruction of historic properties, and permanent change in the land area within the Conservation District created by the land use was not reviewed nor authorized by the Department of Land and Natural Resources. The matter will be scheduled for a decision by the Board of Land and Natural Resources at a time and date to be announced.”

DLNR says it is working with Hawai‘i County to “further investigate allegations that the company left two piles of dirt on the shore after trying to excavate land for a launch. It is also attempting to work with the land owner on mitigation measures with respect to potential impacts in the ocean.”

Hang Loose Boat Tours does have a valid commercial use permit (CUP) from the DLNR Division of Boating and Ocean Recreation (DOBOR), the state says. However, that too could be in jeopardy. Since the boat tour’s access permit from the private land owner was revoked, then “unless the company can show it has another access point, which is required for the commercial use permit, DOBOR could ask the Land Board to revoke it,” DLNR says.

DLNR provided this background on the existing laws:

State of Hawai‘i historic preservation laws state that it is a civil and administrative violation for any person to take, appropriate, excavate, injure, destroy, or alter any historic property or burial site during the course of land development or land alteration activities, without obtaining the required approvals; and State of Hawai‘i Administrative Rules for land use(s) within the State Land Use Conservation District state that no land use (s) shall be conducted in a Conservation District unless a permit or approval is first obtained from the DLNR or the Board of Land and Natural Resources (BLNR). It is alleged that Mr. Valej failed to obtain any such approvals from the State.

For historic preservation violations, the statute states: Any person who violates this section shall be fined not more than $10,000 for each separate violation. If the violator directly or indirectly has caused the loss of, or damage to, any historic property or burial site, the violator shall be fined an additional amount determined by the court or an administrative adjudicative authority to be equivalent to the value of the lost or damaged historic property or burial site. Each day of continued violation of this provision shall constitute a distinct and separate violation for which the violator may be punished. Equipment used by a violator for the taking, appropriation, excavation, injury, destruction, or alteration of any historic property or burial site, shall be subject to seizure and disposition by the State without compensation to its owner or owners.

Simon Valej made an unexpected appearance during a June 26 community meeting held in Na’alehu to discuss the situation in Punalu‘u, where he told the local residents he was sorry for his actions.