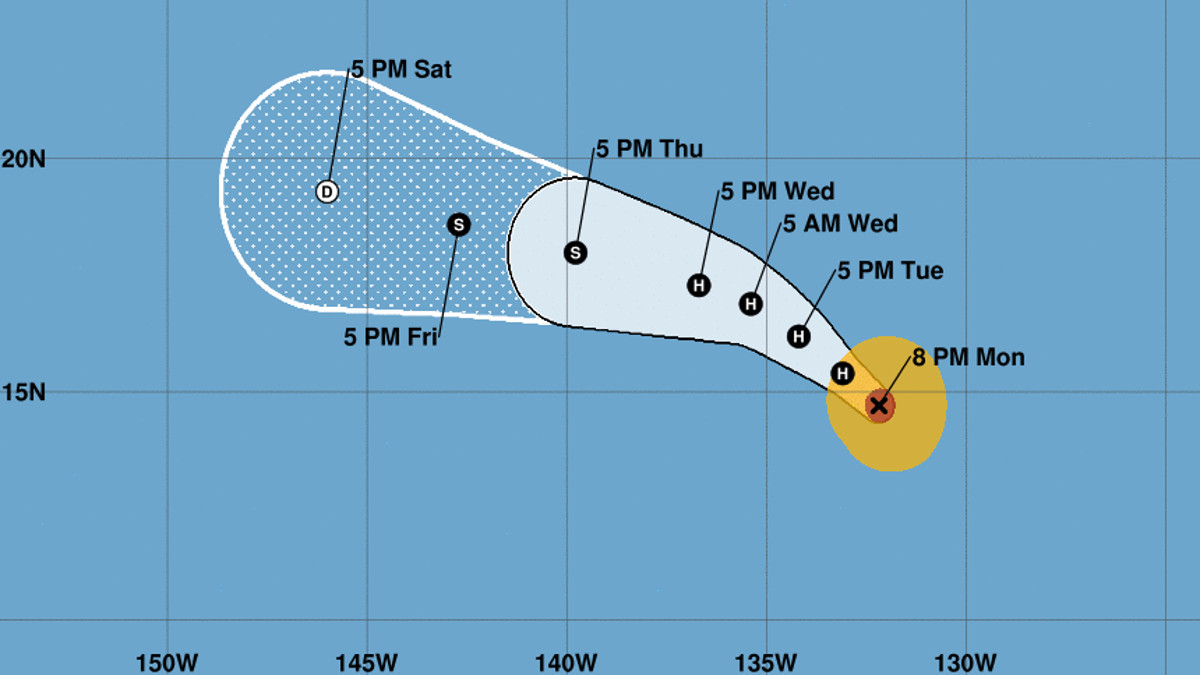 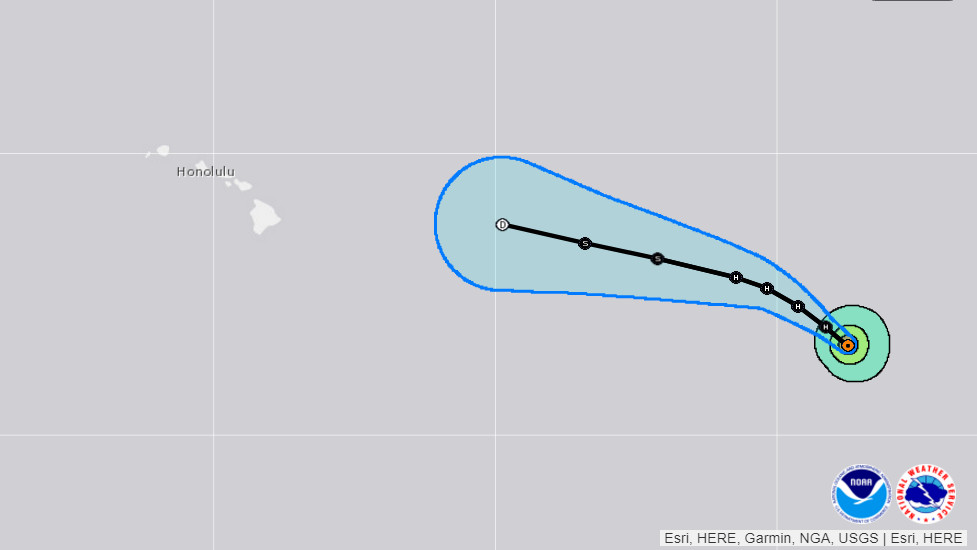 
(BIVN) – As Hurricane Fernanda moves closer to the Central North Pacific, the forecast for Hawaii is looking favorable as the storm continues to weaken.

Fernanda has become a category 2 hurricane, churning 1,550 miles east of Hilo. Maximum sustained winds have decreased to near 110 mph, and continued gradual weakening is forecast during the next couple of days.

“The National Hurricane Center has (Fernanda) forecast to become a remnant low on Saturday and still 500+ miles east of the state at that time,” forecasters with the National Weather Service in Honolulu stated earlier this morning. “While there’s a range of things that can still happen this week, it is positive news for us in Hawaii.”

“We’ll see how much latitude Fernanda gains this week as it approaches and interacts with an upper trough,” the Honolulu meteorologists continued. “Typically, as tropical cyclones weaken, the low-level flow (in our case, the ENE trades) begin to steer the circulation and moisture. Depending on where Fernanda is at when this happens will determine where the rain ends up.”

“Civil Defense will continue to monitor this system,” the emergency officials stated. “Should any threat develop, you will be informed.”

“An east swell from Fernanda may reach the Hawaii coastal waters as early as tonight,” the NWS says, “then build through the week. The size of this swell will be dependent on the track and intensity of Fernanda.”

The National Weather Service had this discussion posted at 5 p.m. HST Monday:

Conventional satellite and two earlier GMI and GCOM-W1 microwave images indicate partial erosion in the southeast quadrant of the eyewall. Inner core cloud top temperatures have warmed, particularly over the aforementioned quadrant and in the western portion. A blend of the subjective and objective Dvorak estimates yields a lowered initial intensity of 95 kt for this advisory. Continued gradual weakening is forecast through the forecast period due to the cyclone traversing cooler oceanic SSTs and moving into a more stable and drier air mass with increasing vertical shear. The official forecast has been adjusted down a bit from the previous forecast based on the lowered initial intensity and follows the IVCN multi-model consensus.

The initial motion is estimated to be northwestward, or 310/8 kt. Global models show a large amplitude mid- to upper-level tropospheric trough situated to the northeast of the Hawaiian Islands lifting northeastward around the 48-hour period, allowing the subtropical ridge to the north of Fernanda to rebuild westward. This change in the synoptic steering pattern should cause the cyclone to turn back toward the west-northwest and continue in this motion through day 5. The NHC forecast track is adjusted to the right of the previous advisory beyond day 3 and is in between the GFS/ECMWF blend and the TVCN consensus.