ONE YEAR AGO: Big Island Video News reports on the start of the lava ocean entry

HAWAII VOLCANOES NATIONAL PARK - The USGS Hawaiian Volcano Observatory looks back on the return of the lava ocean entry, one year ago... accompanied by video coverage. 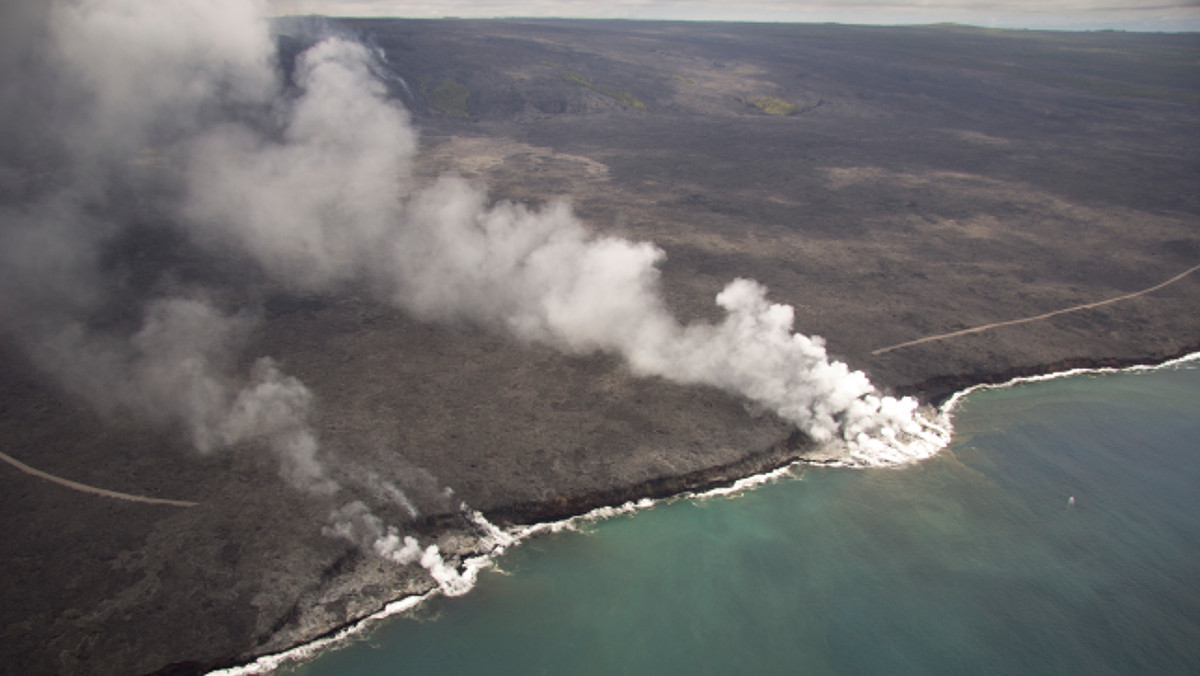 (BIVN) – In this week’s Volcano Watch article, written by U.S. Geological Survey Hawaiian Volcano Observatory scientists and colleagues, the focus is on the anniversary of the start of the Kamokuna lava ocean entry. We at Big Island Video News have taken the liberty of adding our video reports between the applicable Volcano Watch paragraphs.

July 26th marks the one-year anniversary of Kīlauea Volcano’s episode 61g lava flow reaching the sea. And at this time, there’s no indication that the Kamokuna ocean entry will soon end.

The story began in late May 2016, when a new vent opened on the flank of the Pu‘u ‘Ō‘ō cone on Kīlauea Volcano’s East Rift Zone. This new phase was called “episode 61g,” as it was the seventh subevent of the 61st episode of the Pu‘u ‘Ō‘ō eruption, which began in 1983.

The episode 61g flow gradually advanced down the south flank of Kīlauea, and, within two months, reached the coast. Just after 1:00 a.m. on July 26, 2016, lava entered the ocean in an area historically called Kamokuna.

When the 61g flow first spilled over the sea cliff, it had been almost three years since lava entered the ocean. Just two weeks later, another branch of the 61g flow reached the ocean west of the main Kamokuna entry. But this second entry was short-lived, lasting only a few months.

The initial Kamokuna ocean entry then became the focus of activity, and the lava wasted no time in building a delta at the base of the sea cliff. By the end of 2016, the lava delta was approximately 24 acres in size.

Lava deltas are inherently unstable features, and the instability of the large Kamokuna delta soon became apparent. Large cracks formed parallel to the coast and the front of the delta slumped seaward.

On New Year’s Eve (Dec. 31, 2016), around 21 acres of the delta and 4 acres of the adjacent older sea cliff collapsed into the ocean. This collapse occurred in piecemeal fashion over the course of several hours. Afterward, only a small remnant of the delta, a ledge of about 2.5 acres, remained along the base of the sea cliff.


Following the delta collapse, tube-fed lava jetted from the cliff face and plunged into the seawater below. Due to its appearance, the gushing lava stream was referred to as a “firehose” flow. This firehose lasted for nearly three months, but surprisingly, a delta did not begin to build right away.


As the flow entered the ocean, spectacular explosions—caused by the interaction of hot lava and cool seawater—hurled fragments of molten and solid rock and volcanic glass both landward and seaward. These ballistic fragments, which can be larger than a basketball and reach several hundred yards (meters), are one of the many hazards at an ocean entry.

After the 2016 delta collapse, the sea cliff near the ocean entry became unstable. The exact cause of this instability is unknown, but it’s possible that the collapse oversteepened the cliff below sea level, weakening its foundation.

In early February 2017, a large slice of the sea cliff, separated from the coastal plain by a deep crack, could be seen vibrating. As it did, the adjacent ground shook. This slice, along with other portions of the sea cliff, eventually collapsed into the sea. These cliff failures can generate large ocean waves and swells, airborne rocky debris, and other dangers for people too close to the ocean entry—on land and at sea.


Near the end of March, the firehose flow was no longer visible, and lava finally began building a small delta. This delta grew to roughly 3 acres (estimated from time-lapse images) before collapsing on May 3. After this collapse, another delta quickly began to form, growing to approximately 6 acres as of mid-July.

A steep ramp of crusted-over lava currently extends from the lava tube exit point (near the top of the cliff) to the delta surface. This ramp formed as the firehose surface cooled and hardened.

Cracks and failures of the ramp have resulted in lava spilling onto the delta surface repeatedly during the past month. These flows have thickened the delta significantly, creating a distinctly sloped surface from the base of the cliff to the sea.

Currently, large, arcuate cracks span nearly the entire length of the lava delta—a reminder that it is unstable and could collapse without warning. Like other ocean entries during the Pu‘u ‘Ō‘ō eruption, the Kamokuna entry is a highly dynamic, and potentially dangerous, part of the lava flow field.