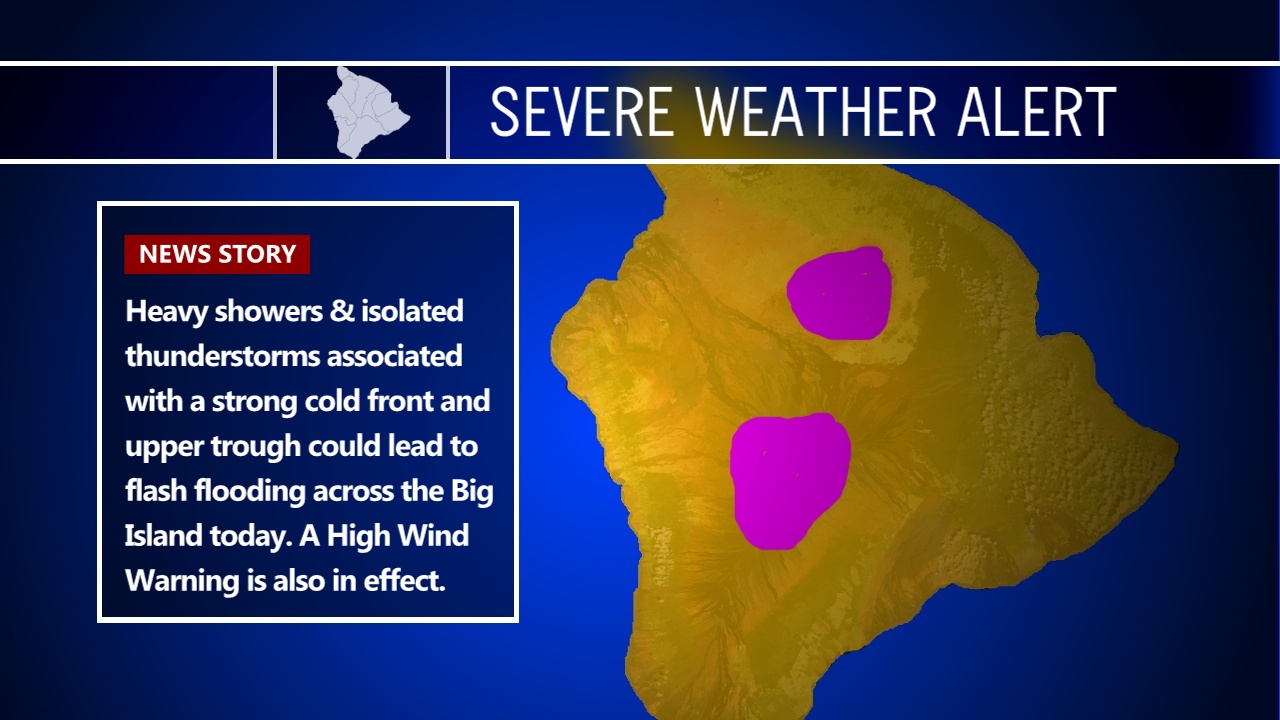 HAWAII ISLAND - Heavy showers and isolated thunderstorms associated with a strong cold front and upper trough could lead to flash flooding across the Big Island today.

At 8:15 a.m. HST, radar and rain gages indicated heavy rainfall occurring over several areas of the Big Island. The National Weather Service says flash flooding is expected in low-lying areas from Kailua-Kona to Kealakekua, over the Ahualoa and upper Paauilo areas of Hamakua, and over the low-lying sections of Hilo.

UPDATE: Kukila Street and Railroad Avenue near Lanikaula Street in Hilo are closed.

Police say Highway 11 near the 50 mm and Kawa are beginning to see signs of flooding. Avoid the area or take alternative routes, police say.

Wood Valley Road in Pahala is also closed due to severe flooding. Stay away from this area, police say.

UPDATE (7:45 a.m.) – The National Weather Service in Honolulu has extended the Flood advisory for Hawaii Island until 10:30 a.m. HST.

Department of Education reports all schools are open, civil defense says. Hawaii County Police reports all roads are open at this time, but advise that driving conditions are poor because of occasional heavy downpours. Police say Kealakehe Police Station is experiencing intermittent phone disruptions due to inclement weather conditions.

At 7:16 a.m. HST, radar indicated heavy rain continuing over portions of the Big Island, forecasters reported. The heaviest rainfall was occurring over the Kona and Kohala slopes from Kealakekua to Hawi, and over the eastern slopes from Pahala to Honomu. Maximum rain rates were in the range of 1 to 2 inches per hour. Rainfall is expected to continue for several more hours.

UPDATE (6:10 a.m.) – The National Weather Service in Honolulu has issued a Flood advisory for Hawaii Island until 7:30 a.m. HST.

At 4:25 a.m. HST, forecasters say radar indicated heavy rain falling between Naalehu and Hilo, with rainfall rates up to one and one half inch per hour. Conditions remain favorable for heavy rains to develop across the rest of Big Island in the next couple of hours.

(BIVN) – Thunder, lightning and heavy rain reached Hawai‘i Island before midnight on Monday, as the The National Weather Service in Honolulu issued a Flood advisory for the entire island of Hawai‘i until 2:15 a.m. HST.

At 11:09 p.m. HST, “radar indicated heavy showers with a few thunderstorms tracking north over the Big Island”, forecasters said. “Rain was falling at a rate of 1 to 2 inches per hour in the heavier showers.”

The Big Island was under a Flash flood Watch for the entire day. A High Wind Warning is also in effect for Hawai‘i Island summits.