PUNA, Hawaii - No access is allowed at this time for residents of Lanipuna Gardens due to dangerous volcanic gases. 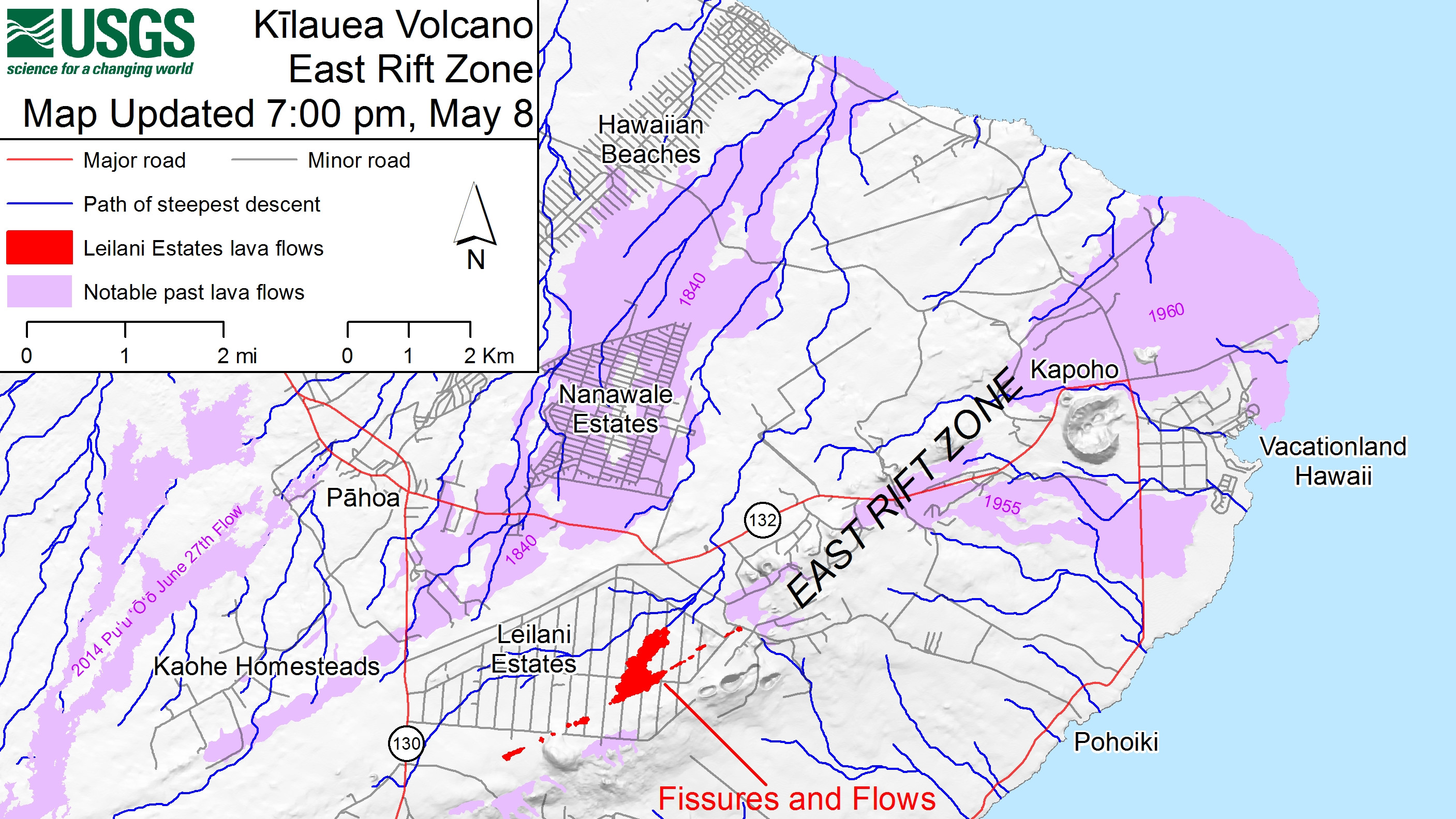 This USGS map shows the locations of fissures and an ‘a’ā flow erupted since May 3 in the order that they occurred in Leilani Estates as of 5:30 p.m. HST, May 9. Note the area of heavy steaming from ground cracks that began earlier this afternoon, located west of Highway 130. The purple areas are lava flows erupted in 1840, 1955, 1960, and 2014-2015. (see large map)

(BIVN) – Here is the latest from Hawaii County Civil Defense at 6 a.m., supplemented by multi-media and updates from other agencies. 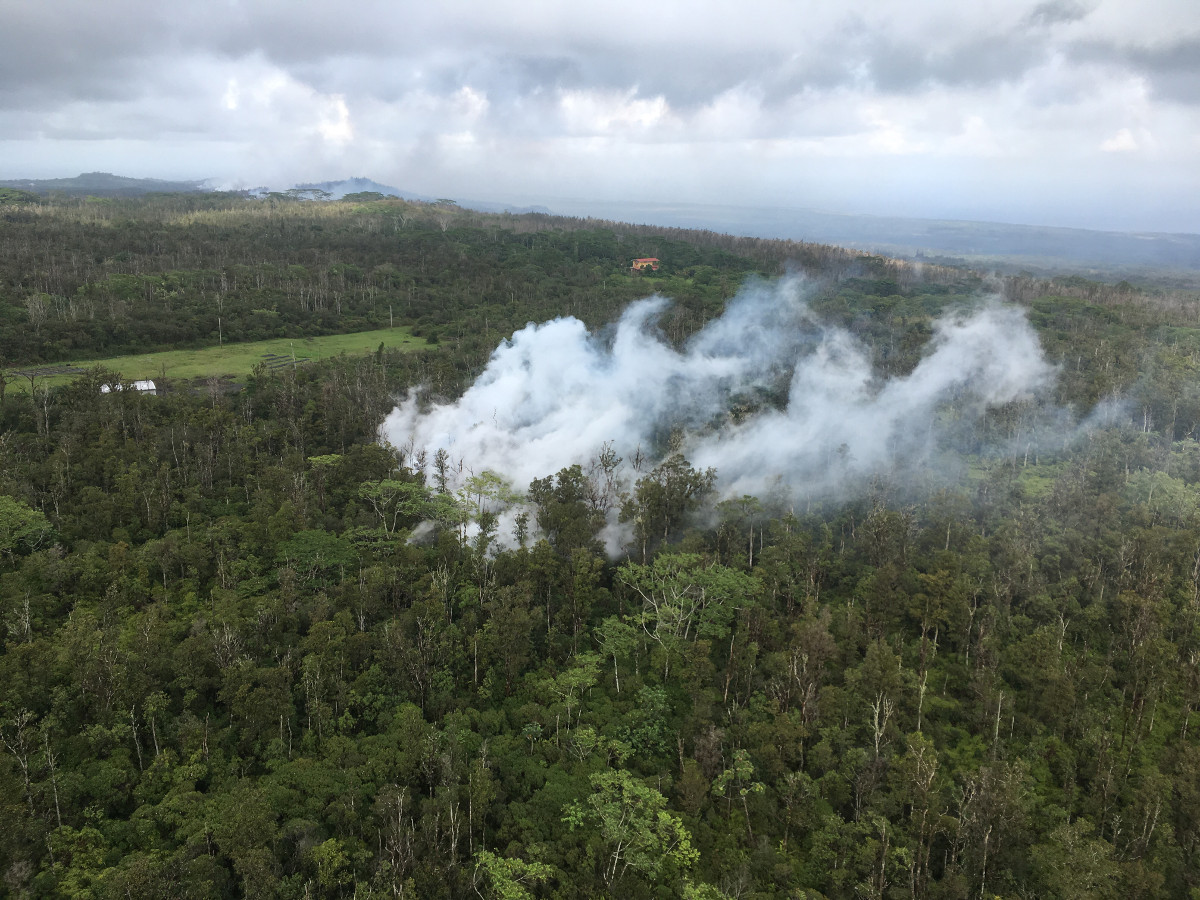 USGS: At 16:22 HST. Steaming area located uprift (west) of Highway 130. Geologists observed many steaming ground cracks in the area during two overflights this afternoon. This area is inline with fissures 1-15 (in distance, upper left in photo), but located farther west.

Ala’ili Road: During an overflight of the area about 3 p.m. HST, geologists observed a new steaming area uprift (west) of Highway 130. During a second overflight at 4:30 p.m., the area was still steaming. HPD evacuated 10 homes at 3:00pm Wednesday on Ala’ili Road, west of Highway 130 between Malama Street and Kamaili Road due to steaming cracks in the road.

Rates of motion increased late Wednesday morning on a GPS station 1.5 km (1 mile) southeast of Nanawale Estates, USGS reported. The direction of motion is consistent with renewed movement of magma in the downrift direction (to the northeast).

Conditions permitting, Leilani Estates residents will be allowed to check on their property from 7 AM to 6 PM each day until further notice. Be prepared to evacuate at a moment’s notice.

Civil Defense Recovery Information and Assistance Center (RIAC) at the Sacred Hearts Church in Pāhoa, Monday to Friday from 9 AM to 3 PM.

Dept. of Water Supply has issued an Emergency water restriction for the Pohoiki, Vacationland and Kapoho area due to the impacts to the bypass waterline caused by the latest fissure event. Water spigots installed near the entrance of Lava Tree State Park and a water tanker in Vacationland are still available for the public to access.

Hawaiʻi Island police have arrested a Pāhoa man in connection with the burglary of a residence in the Leilani Estates Subdivision, an area covered by an Emergency Proclamation declared by the Mayor’s Office within the residence as of May 3, 2018.

On Wednesday (May 9), the victim, a 66-year old man, told police that he and an acquaintance arrived at his Moku Street home to retrieve personal belongings when the victim encountered a man exiting the office of the residence. The victim discovered that the suspect had keys in his possession that was taken from the office.

At 12:03 p.m. the suspect, 29 year-old Alexandru Stingu-Dragomir was arrested without incident after the victim and his acquaintance took the suspect to the police checkpoint at the Highway 130 and Leilani Avenue intersection. Stingu-Dragomir will be held at the Hilo Cellblock while detectives with the Area I Criminal Investigation Section continue the investigation that is classified as a burglary of a dwelling during an emergency period. Detectives have also linked the suspect to another residential burglary in Leilani Estates and are continuing that investigation as well.

Section 708-817 of the Hawaii Revised Statutes provides that if a person commits the offense of burglary of a dwelling during an emergency period proclaimed by the governor or mayor pursuant to chapter 127A and within the area covered by the emergency period, the offender is subject to a Class “A” felony, punishable by up to 20 years of incarceration.

Hawai‘i Academy of Arts and Sciences is closed for the rest of the week.