HAWAII ISLAND - Lava has covered 2,372 acres, or 3.7 square miles, since the current eruption in the lower East Rift Zone of Kilauea began. 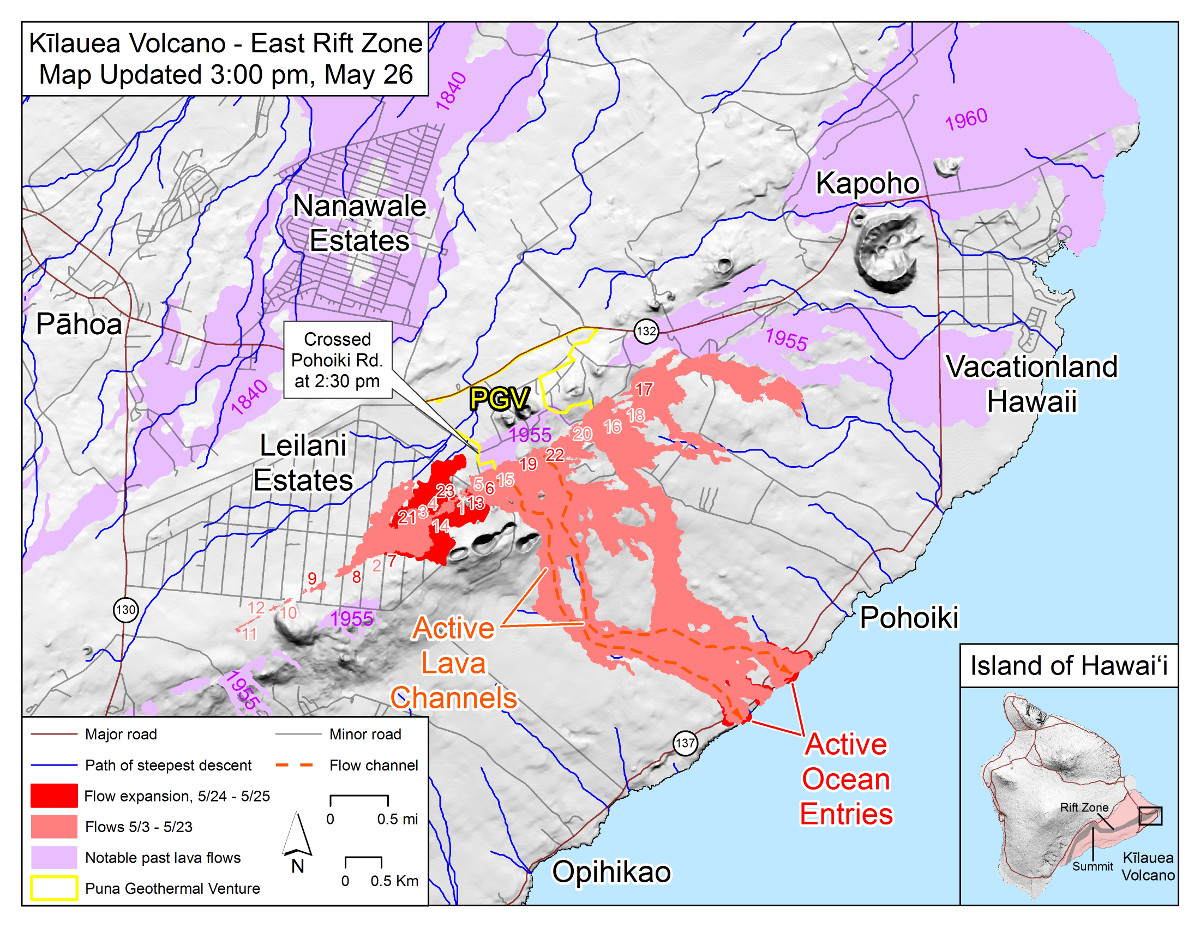 UPDATE (7:45 p.m.) – A lava flow from fissure 7 in eastern Leilani Estates has emerged from the southeast side of the lava pond, and has turned south, USGS reports. As of 6:15 pm HST, this flow was cascading into Pawaii crater.

(BIVN) – Emergency officials and scientists have this update on the ongoing eruption on the lower East Rift Zone and at the Kilauea summit for Saturday evening.

Hawaii County Civil Defense reports the lava flow in Leilani Estates crossed Pohoiki road slightly north of the HGPA site. The flows to the South continue to enter the ocean near MacKenzie State Park, officials say. In the time since the current eruption began, lava is now covering 2,372 acres, or 3.7 square miles.

According to the USGS Hawaiian Volcano Observatory at 5:20 p.m. HST:

Vigorous eruption of lava continues from the lower East Rift Zone fissure system in the area of Leilani Estates and Lanipuna Gardens. As of this morning, almost 2400 acres have been covered by new lava.

Fissures 22, 6, and 13 are feeding lava flows moving southeast to the coast southwest of Pohoiki. At midday today, two ocean entries were active. Over the past 24 hours, channels feeding these ocean entries have diminished somewhat in vigor, however the laze plume generated remains significant.

Fissures 7 and 21 are feeding an ‘a’ā flow that has advanced to the northeast and this afternoon crossed Pahoa Pohoiki Road onto PGV property.

HVO field crews are on site tracking the fountains, lava flows, and spattering from multiple fissures as conditions allow and reporting information to Hawaii County Civil Defense. Crews are also checking on the status of ground cracks on Highway 130.

Volcanic gas emissions remain very high from the fissure eruptions. Trade winds are expected to diminish Sunday evening and the area impacted by vog could expand.

“Volcanic gases, vog and ash emissions may increase in areas down wind of the vents,” civil defense says. “Areas along Kamalii Road are experiencing elevated levels of sulfur dioxide.”

Residents close to the active eruption must remain alert to changes in the flow direction, and are advised to prepare for voluntary evacuation should their areas become threatened, civil defense says.

During the most energetic event of the day, ash from Overlook crater rose as 12-13,000 feet above sea level based on National Weather Service radar. Trade winds took the ash clouds primarily to the southwest. Trade winds are expected to diminish Sunday evening and communities around the summit area could see ashfall.

Earthquakes in the summit region continue as the summit area subsides and adjusts to the withdrawal of magma.

Additional explosive events that could produce minor amounts of ashfall downwind are possible at any time. Volcanic gas emissions at the summit remain high.