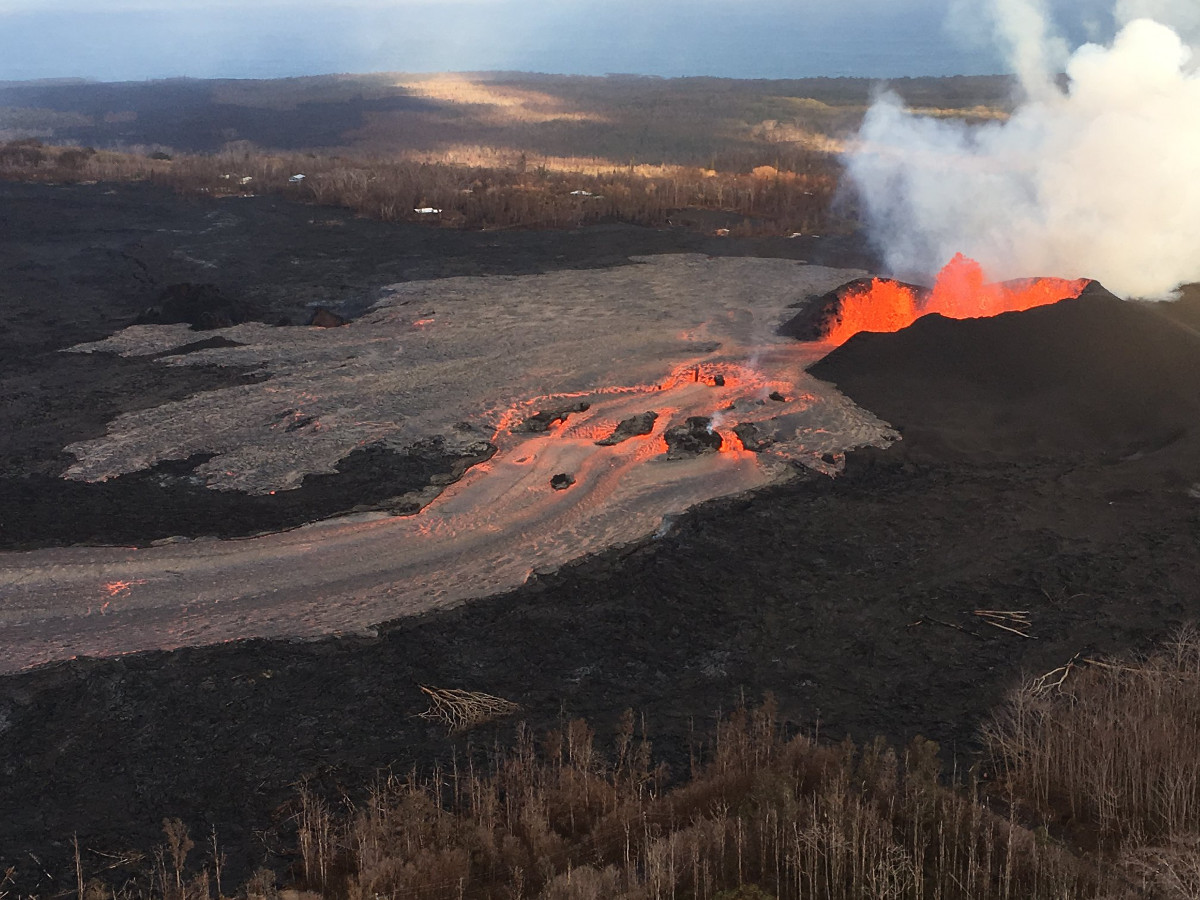 USGS: This photo from the 5 p.m. HST June 10 overflight shows the three fountains of the fissure 8 cone, the channelized lava flow, and minor spillovers. The spillovers have generally stalled before reaching ground not covered by previous lava flows.

Hawaiian Volcano Observatory reports that the eruption continues in the lower East Rift Zone. Fissure 8 continues to produce a large channelized flow that is entering the ocean at Kapoho Bay and producing a large laze plume. Hawaiian Volcano Observatory also reports that a steam explosion occurred at the Kilauea Summit early this morning, so be aware of ash fallout if your commute takes you through Ka’u.

Due to the lava entering the ocean, the following policies are in effect:

Due to the current volcanic activity, the following policies are in effect:

The shelter at Pahoa Community Center is open and pet-friendly. The Keaau Armory shelter has reached capacity.

Hawaiian Volcano Observatory reports volcanic gas emissions remain very high from fissure eruptions. Due to the elevated gas levels, the following is provided for your information:

The three closely spaced lava fountains at Fissure 8 are erupting with maximum heights reaching 150-180 feet. Lava continues to be fed into the channelized flow trending north and then east to the ocean entry at Kapoho. Very minor spillovers are occurring at multiple places along the channel but have uniformly been short lived and are not threatening areas that were not previously covered by lava. Gas emissions from the fissure eruption continue to be very high. The late afternoon overflight noted a vigorous plume rising from the ocean entry with minor steam explosions at the leading edge.

Minor incandescence and lava activity at Fissures 16/18 is continuing but not feeding significant flows. No other fissure is showing activity at this time.

Two explosions were detected at the summit of Kilauea overnight and early this morning.

A larger explosion (but still considered small by scientists) occurred at Kīlauea’s summit at 4:43 a.m. HST. The preliminary magnitude was measured at 5.4. As with previous events, minor ashfall may occur downwind, USGS said.

“The county and the state are preparing damage assessment documents in order to request an Individual Assistance declaration for the County,” officials say. “While FEMA has provided support since the President issued the federal
disaster declaration, this meeting is an opportunity for Administrator Fenton to see first hand the dramatic devastation that is occurring with the current Kilauea eruption.”