HAWAII VOLCANOES NATIONAL PARK - Inside the park at Waldron Ledge, officials gave a comprehensive update on Kilauea Volcano and the status of the National Park. 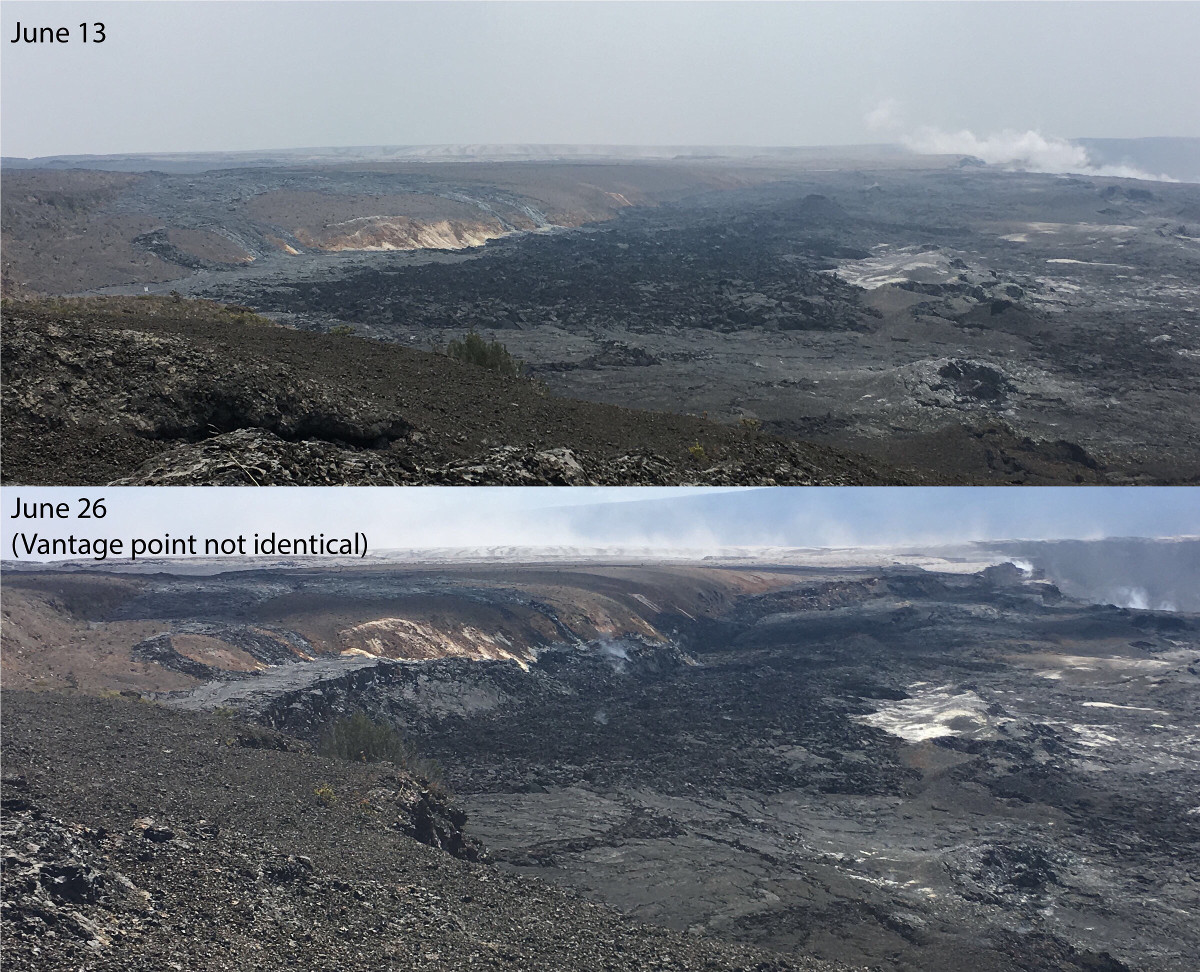 USGS: Comparison of photographs taken on June 13 and 26 from near Keanakāko’i Crater overlook in Hawai’i Volcanoes National Park shows a subsidence scarp that formed as the Kīlauea Crater floor subsided. Scientists estimate the dramatic dropping of the crater floor in this area occurred sometime between June 23 and 26. The view is to the west. Halema‘uma‘u crater is in upper right.

(BIVN) – For the first time since Hawaii Volcanoes National Park was closed on May 11 due to safety concerns at the summit of Kilauea Volcano, federal officials led local media through the gates for a press conference and a look at the dramatic changes underway at Halemaʻumaʻu.

Parking lots and facilities are empty inside the park. Ash covers roads and roofs in the vicinity of Halemaʻumaʻu, where inward slumping of the rim and walls continues in response to ongoing subsidence at the summit.

Inside the park at Waldron Ledge, the National Park Service was joined by scientists with the USGS Hawaiian Volcano Observatory, where the officials gave a comprehensive update on Kilauea and the status of the National Park.

Media was also guided to the Kilauea Overlook, where cracks scar the landscape, and the Jaggar Museum now sits closed.

Sulfur dioxide emissions from the volcano’s summit have dropped to levels that are about half those measured prior to the onset of the current episode of eruptive activity, scientists say. This gas and minor amounts of ash are being transported downwind, with small bursts of ash and gas accompanying intermittent explosive activity, USGS says.

A community meeting will also be held this evening (Thursday, June 28) at the Cooper Center in Volcano Village at 6:30 p.m. regarding the ongoing seismic and collapse/explosion activity at the summit of Kīlauea and the continued closure of the Kīlauea section of Hawai‘i Volcanoes National Park.

The summit area of Kīlauea Volcano has undergone significant changes since April 2018. On April 21, the lava lake within Halemaʻumaʻu overflowed onto the crater floor as the volcano’s magmatic system pressurized. In the East Rift Zone, less lava was erupting from the Pu‘u ‘Ō‘ō vent, with small flows at the cone and in the crater. On April 30, the floor of the Pu‘u ‘Ō‘ō crater collapsed, as subsurface pressure forced open a pathway for magma to travel from Pu‘u ‘Ō‘ō into the lower East Rift Zone. The pathway follows a well-established magma transport system within Kīlauea that last saw a magma intrusion in 1960. As magma moved into the lower East Rift Zone, pressure decreased in the summit’s magmatic system and the lava lake level began to drop. The summit also started to deflate due to the pressure decrease, as magma stored beneath the summit was clearly draining into the East Rift Zone.

As summit subsidence persisted, the number of earthquakes increased. Prior to the onset of deflation, about 10 earthquakes per day were typical at the summit. As of late June 2018, there are about 600 earthquakes located in the same region on a daily basis. Many of these earthquakes are strong enough to be felt, and some can be damaging. These earthquakes are understandably causing concern, especially in Volcano Village and surrounding subdivisions. These FAQs will help answer some of the most commonly asked questions about the nature of Kīlauea’s summit activity, and especially the numerous earthquakes that are occurring in the area.
Frequently Asked Questions

1) Why are there so many earthquakes occurring around the summit?

The rigid rock of the caldera floor is responding to the steady withdrawal of magma from a shallow reservoir beneath the summit. As magma drains into the East Rift Zone and slowly pulls away support of the rock above it, the rock responds by incrementally collapsing.

2) Explain the cycle of earthquakes surrounding the summit collapse/explosion events.

Analyses of data from tiltmeters, GPS stations, seismometers, gas measurements, satellite and visual observations are ongoing, and several hypotheses could explain the processes occurring at the summit. A leading concept is that incremental collapses beneath the caldera act as a piston dropping on top of a depressurized magmatic system. This collapse process culminates in a large earthquake that may be strong enough to be felt by residents in the area. It also can produce an explosion in which gas drives ash into the atmosphere. After a large collapse/explosion event, the stress on the faults around Halemaʻumaʻu is reduced, resulting in fewer earthquakes. Several hours later, as magma continues to drain out of the summit, stress increases on the faults around Halemaʻumaʻu and earthquake rates increase and grow to a constant level that continues for several hours before the next collapse/explosion event.

3) Why is there a collapse/explosion event nearly every day at such a regular interval?

The cycle is linked to the steady withdrawal of magma from the shallow reservoir. Each collapse/explosion event is triggered when the caldera floor can no longer support its own weight. Since the sequence began on May 16, we have observed intervals between collapse/explosion events as short at 8 hours and as long as 64 hours. The average is about 28 hours, which is why they seem to happen on an almost daily interval.

4) Why do so many of the collapse/explosion events have the same energy equivalent as a magnitude around 5.3?

The energy being released, which corresponds to the magnitudes being reported, is a reflection of the physical process that produces these events. That process seems to be remarkably consistent over time. It is likely controlled by the geometry of the caldera itself and the size of the piston collapse.

5) Why does the collapse/explosion event feel smaller/larger than the magnitude shown?

There is no direct correlation between earthquake magnitude and felt intensity. Magnitude is an estimate of earthquake energy release, whereas intensity is the amount of shaking felt at any given spot. Intensity is highly dependent on distance from the earthquake, geology of the subsurface, and the type of seismic waves.
Magnitude 5+ earthquakes in Hawaii typically occur when rocks slide along large faults. These recent high magnitude Kīlauea earthquakes occur due to collapse and explosions under the caldera, which have an equivalent magnitude but differ in intensity because of the way the seismic waves are produced.

6) Why are the plumes produced during a collapse/explosion so much smaller now? Could there be another tall 30,000 ft plume during this eruption?

Early on, during the eruptive sequence from May 16-26, the vent within Halemaʻumaʻu crater was open so ash plumes could rise into the air with each collapse/explosion event. By May 29, rock rubble from the crater rim and walls had filled the vent, blocking the path for most of the ash to escape. At that time, the shallow portion of the conduit that comprises the shallow magma reservoir may have also partially collapsed, further blocking the path for ash to escape. This does not however, rule out the possibility of future ash plumes reaching heights of several thousand feet above the crater.

7) Why are earthquakes occurring further outboard of Halemaʻumaʻu with time?

Halemaʻumaʻu has changed dramatically since early May. The depth of the crater has more than tripled and the diameter has more than doubled. As magma continues to withdraw from the shallow reservoir beneath the Kīlauea summit, the area experiencing subsidence expands. While this process began under Halemaʻumaʻu crater, active down-dropping now encompasses a larger area still contained within the existing caldera walls (as revealed by deformation measurements of the summit area). As a result, the earthquakes span a larger area as well.

8) Why does it take so long for the collapse/explosion events to appear in the earthquake catalog on the website?

These events are complex and significant. The role of USGS is to post the most accurate and reliable information available. It takes about a half-hour for the long period seismic waves to reach seismic stations in Alaska and California, which are required to accurately calculate the magnitudes for this type of event. Because of these factors, additional time is required for a seismologist to review the event.

9) Why do earthquakes posted online sometimes get removed?

Sometimes two event locations are generated from the same earthquake, in which case the event that was generated in error is manually removed from the list.

10) Why are the larger earthquakes at the Kīlauea summit not a tsunami threat?

The earthquakes occurring at the summit of Kīlauea are about 15 km (10 mi) from the coast. They are not close enough to the ocean to affect it in any way. Locally-generated tsunamis in Hawaii tend to be caused by large magnitude (about 7 and higher) earthquakes that occur near the coast.

11) Is the summit seismic activity influenced by tides?

No. We see no correlation between the summit seismicity pattern and tides.