HAWAII ISLAND - Scientists noticed the tiny island was oozing lava similar to the lava oozing from the broad flow front along the coastline.

(BIVN) – A tiny new island of lava has formed on the northernmost part of the ocean entry off Kapoho, scientists say, as Fissure 8 continues to be the primary erupting vent on Kīlauea’s lower East Rift Zone.

During this morning’s overflight, a USGS Hawaiian Volcano Observatory field crew “noticed the island was oozing lava similar to the lava oozing from the broad flow front along the coastline.”

A closer view of the new “island,” which was estimated to be just a few meters offshore, and perhaps 6-9 meters (20-30 ft) in diameter. It’s most likely part of the fissure 8 flow that’s entering the ocean—and possibly a submarine tumulus that built up underwater and emerged above sea level. 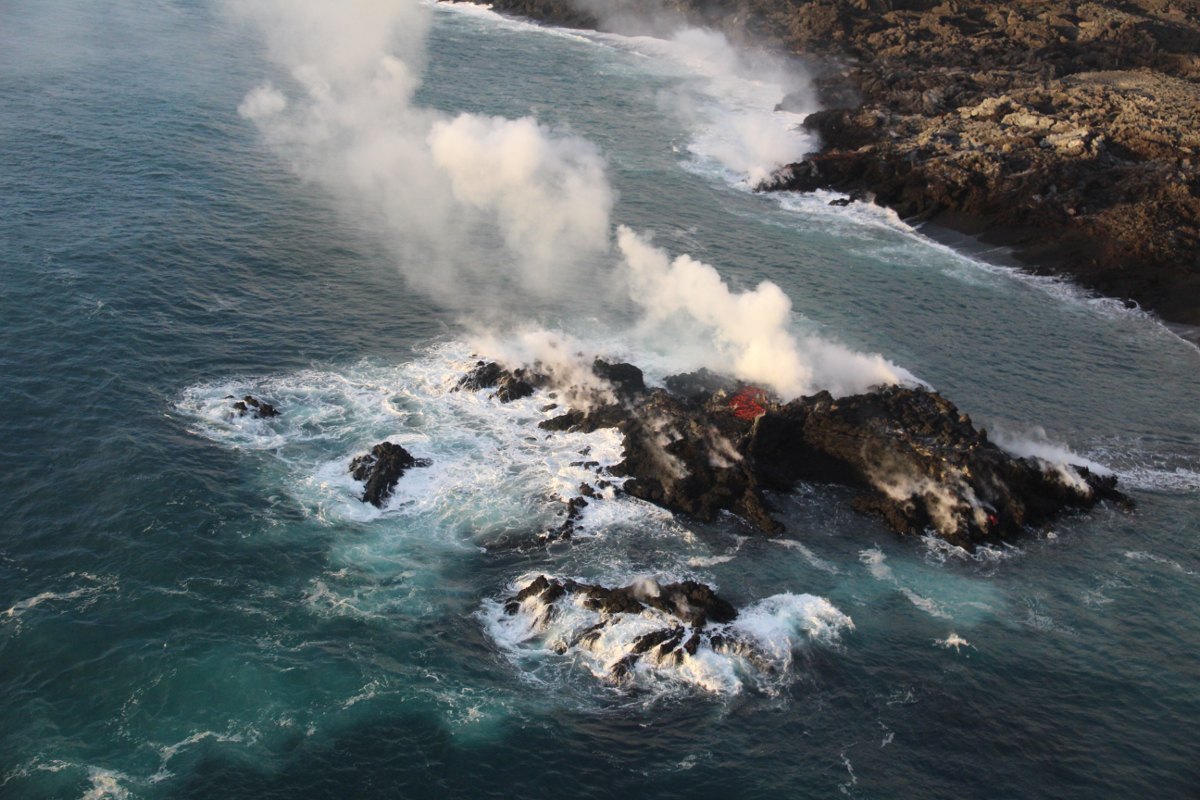 photo of the lava island off Kapoho, by USGS Hawaiian Volcano Observatory

Fissure 8 continues to erupt lava into the perched channel leading northeastward from the vent. Lava levels in the upper channel between Fissure 8 and Pohoiki Rd. are low this morning but are expected to rise after the next collapse/explosive vent at Kīlauea summit. The channelized ʻaʻā flow west of Kapoho Crater continues to be the main ocean entry at the southern edge of the flow front this morning. Despite no visible surface connection to the Fissure 8 channel, lava continues to ooze out at several points on the 6 km (3.7 mi) wide flow front into the ocean. In general, the laze plumes from the oozing appear weaker this morning.

Fissure 22 has no visible activity, USGS reported. “No other fissures are active but many were steaming this morning, possibly due to the increasing humidity in the area”, scientists said. 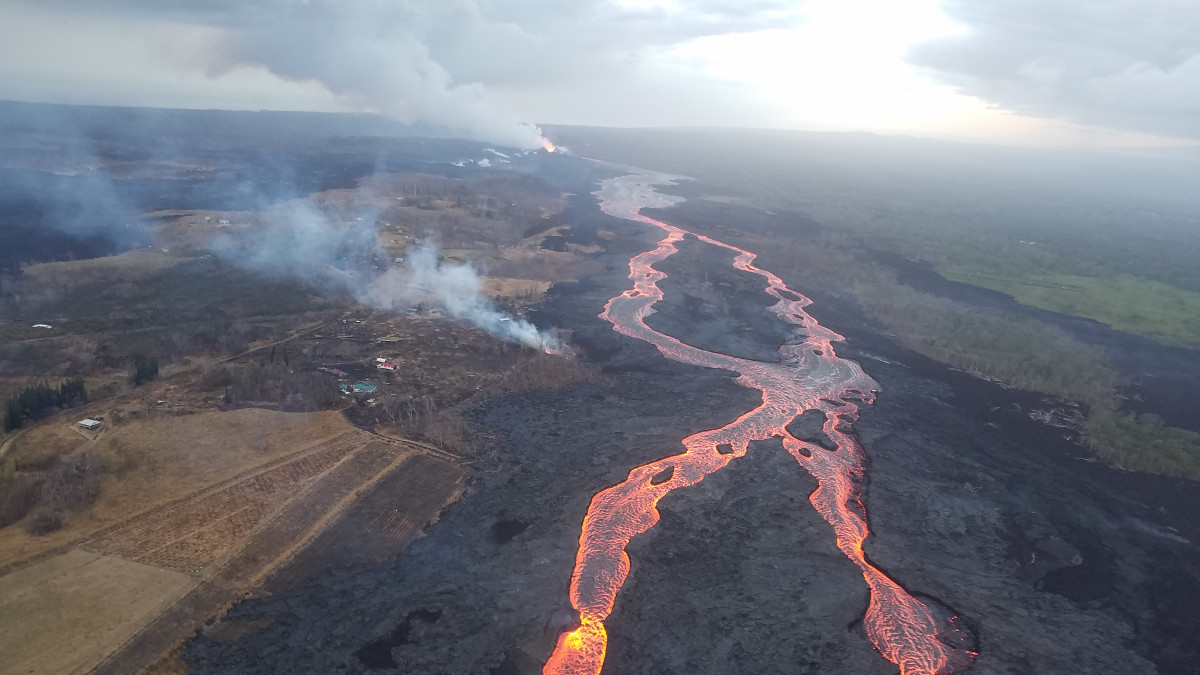 photo of the braided lava channel extending from the fissure 8 vent, by USGS Hawaiian Volcano Observatory

Officials are keeping an eye on the southern edge of the flow front, where Ahalanui Beach Park and Kua O Ka La Charter School were covered by lava on Wednesday. Hawaii County Civil Defense reported the flow was moving towards Pohoiki earlier today. The plume at the new ocean entry had migrated about 300 m (or 985 ft) to the west today, the USGS Hawaiian Volcano Observatory measured. 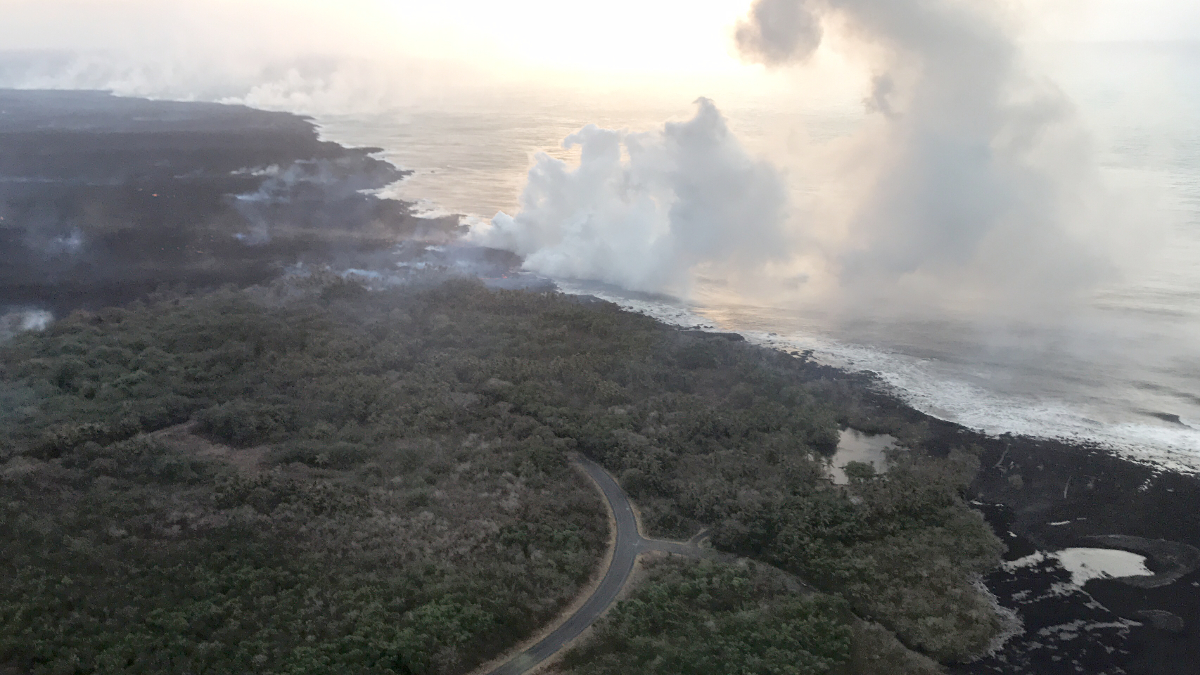 The National Weather Service is forecasting increased rainfall with a chance of thunderstorms beginning after midnight, and continuing through the weekend, civil defense says.