HAWAII ISLAND - The USGS noted that after yesterday's summit collapse explosion, "there was an increase in activity from fissure 8 although only small channel breaches have been observed south of the ocean entry." 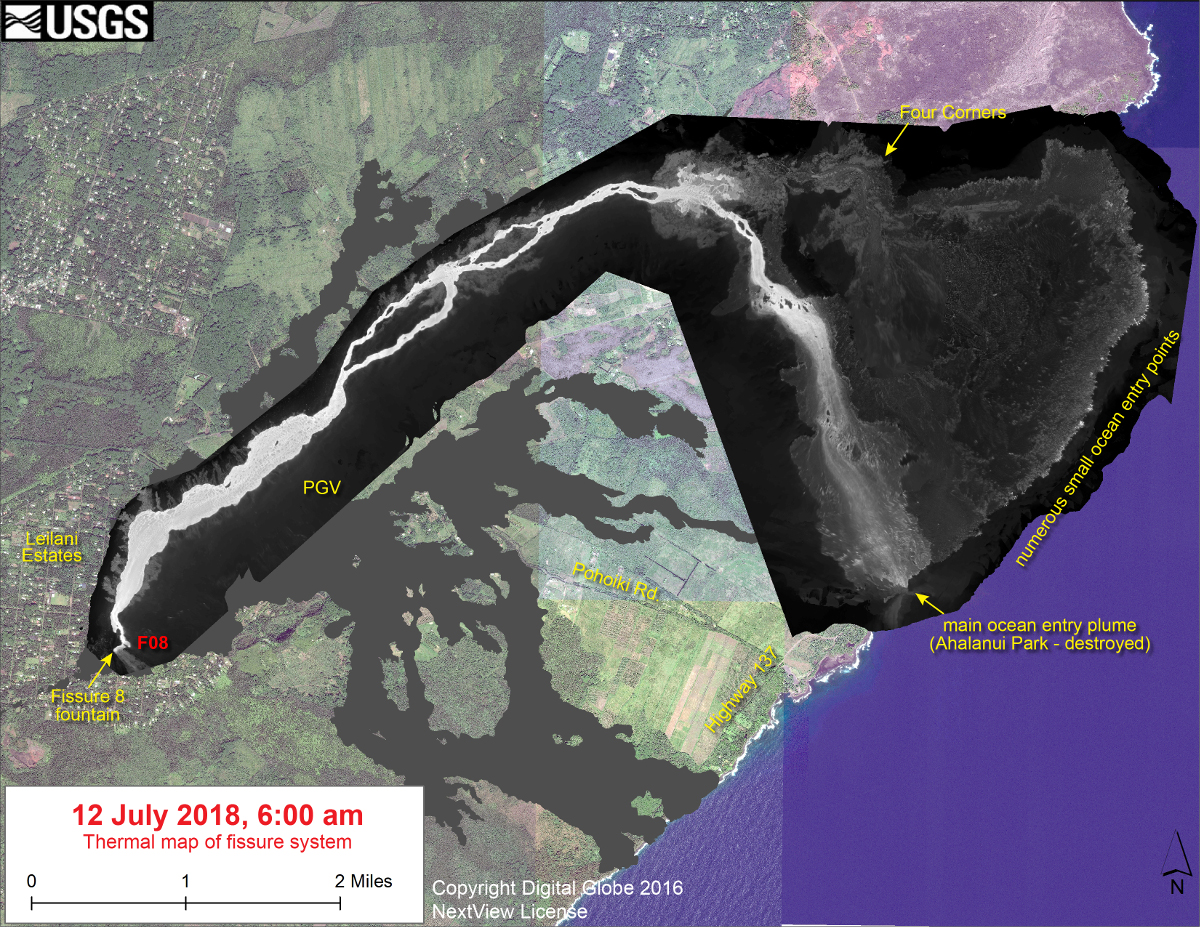 (USGS) This thermal map shows the fissure system and lava flows as of 6 am on Thursday, July 12. The fountain at Fissure 8 remains active, with the lava flow entering the ocean at numerous points in Kapoho. The channel overflow from July 9-10 created a new lobe that reached the ocean over the past day, destroying Ahalanui Park and the nearby charter school. A robust ocean entry plume was active at the location of Ahalanui Park. The black and white area is the extent of the thermal map. Temperature in the thermal image is displayed as gray-scale values, with the brightest pixels indicating the hottest areas. The thermal map was constructed by stitching many overlapping oblique thermal images collected by a handheld thermal camera during a helicopter overflight of the flow field. The base is a copyrighted color satellite image (used with permission) provided by Digital Globe.

Fissure 8 continues to erupt lava into the perched channel heading northeast from the vent toward Kapoho, officials observed this morning. Two days ago, a diverted channelized ʻaʻā flow west of Kapoho Crater advanced to the ocean, covering the Kua O Ka La Charter School and Ahalanui Beach Park on the way, and establishing a robust ocean entry. 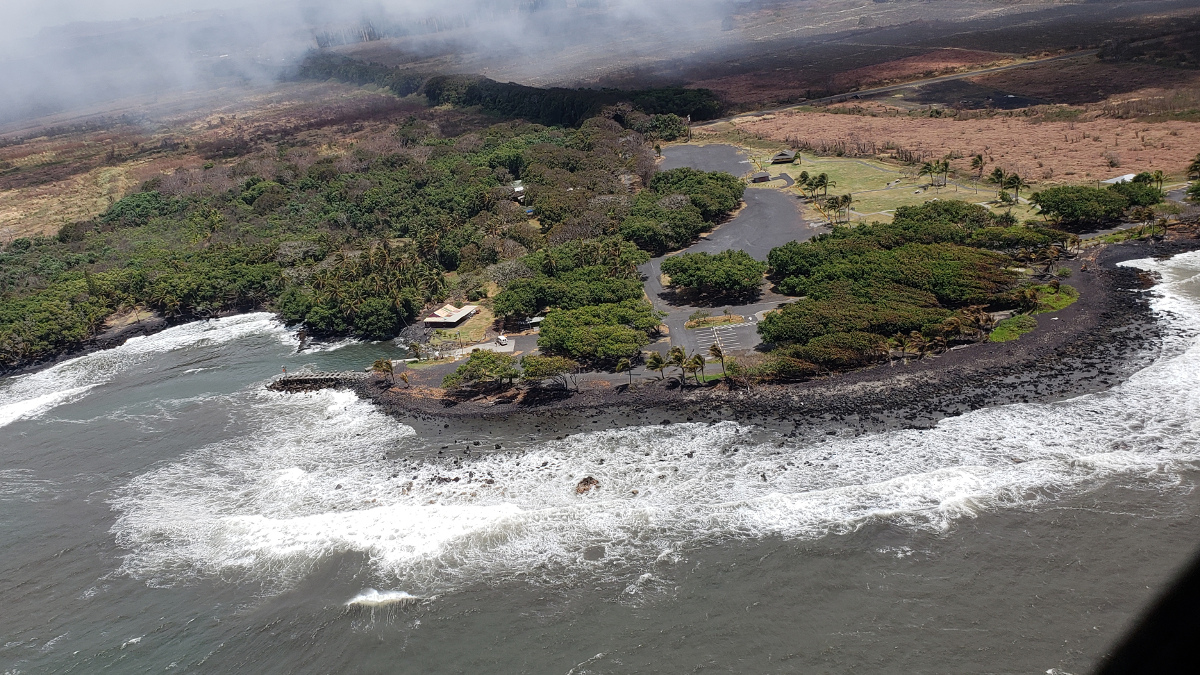 Hawaii County photo of Pohoiki, taken yesterday. The plume of from the new ocean entry hangs over the area.

At 2:42 p.m. HST on July 12, a collapse explosion event occurred at Kīlauea’s summit. The energy released by the event was equivalent to a Magnitude 5.3 earthquake. The USGS Hawaiian Volcano Observatory noted that after the collapse explosion “there was an increase in activity from fissure 8 although only small channel breaches have been observed south of the ocean entry.” 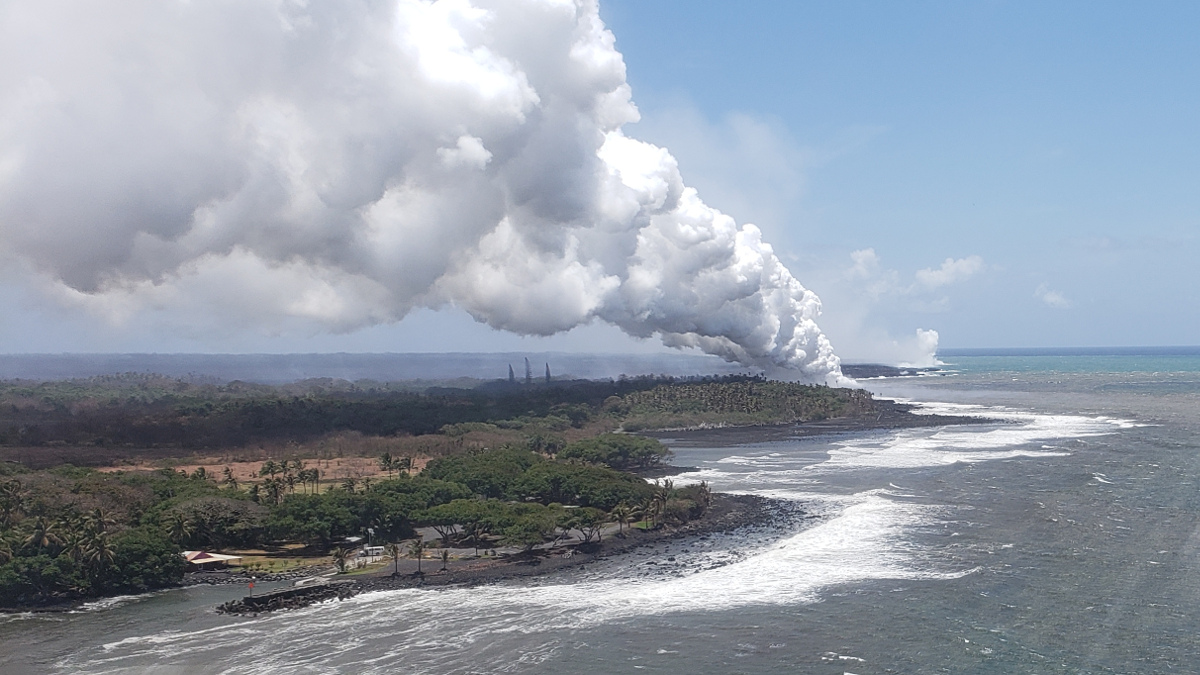 On Thursday, Director Tanya Garfield of the U.S. Small Business Administration’s Disaster Field Operations Center-West announced that SBA has approved $10.2 million in federal disaster loans for Hawaii businesses and residents impacted by Kilauea volcanic eruption and earthquakes that began on May 3, 2018.

According to a news release, SBA has approved $989,500 for businesses and $9,211,900 for residents to help rebuild and recover from this disaster.

“SBA’s disaster assistance employees are committed to helping businesses and residents rebuild as quickly as possible,” said Garfield. Businesses and residents who sustained damages are encouraged to register prior to the Aug. 13, 2018, deadline with the Federal Emergency Management Agency at disasterassistance.gov. “Don’t miss out on any assistance you may be entitled to by not registering for help. You don’t need to wait for your insurance to settle or obtain a contractor’s estimate,” she added.