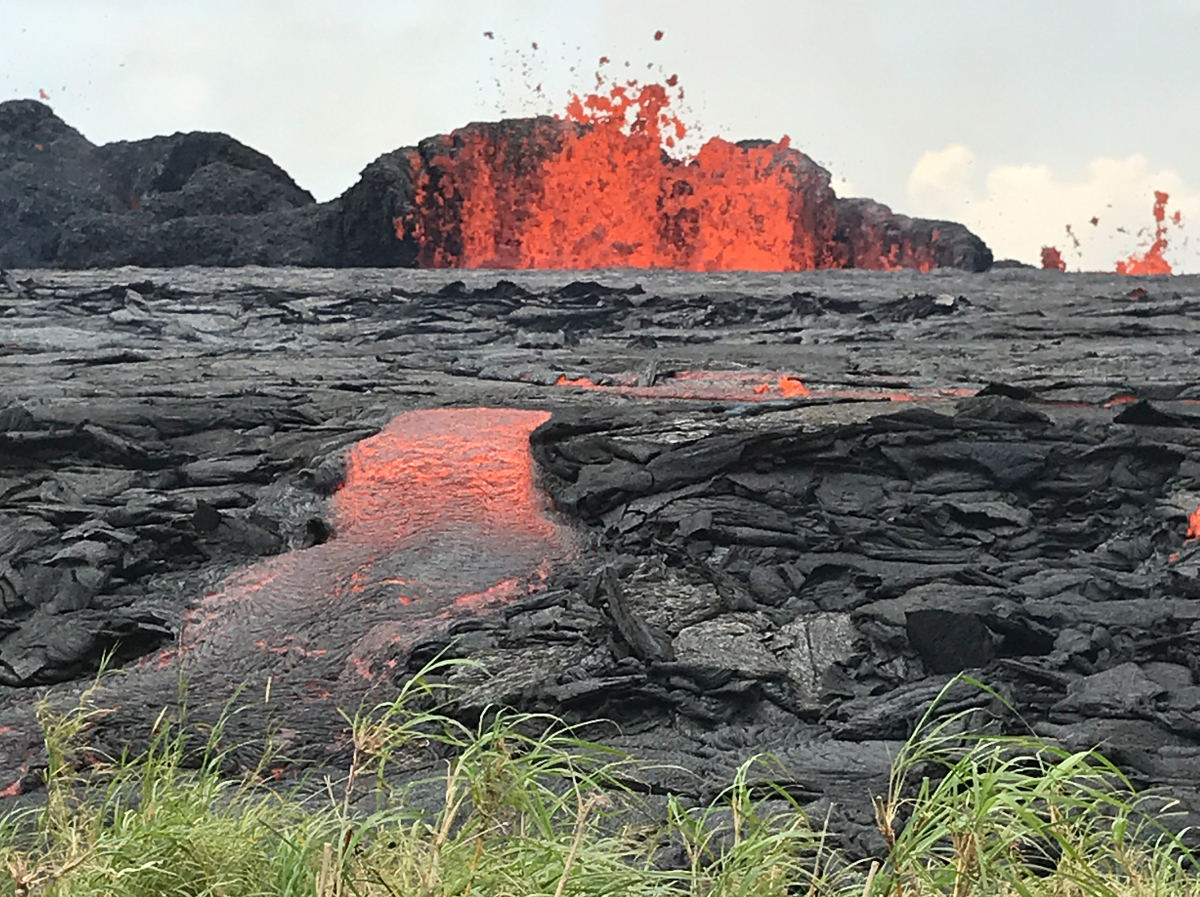 (BIVN) – In this week’s USGS Volcano Watch article, Cheryl Gansecki with the University of Hawaiʻi-Hilo Department of Geology writes about the effort to determine the chemical make-up of the lava erupted along the lower East Rift Zone of Kilauea, and how the information was used by scientists tracking the event.

“What’s happening inside the volcano?” is just one of many questions asked about Kīlauea’s ongoing lower East Rift Zone eruption. Looking at the geochemistry of erupted lava can help us answer these questions.

Magma supplying Kīlauea’s eruption is composed of melt (molten rock), mineral crystals, and dissolved gases or gas bubbles (exsolved gases). Elements that make up magma can stay in the melt or can build crystals depending on the magma temperature, pressure, and abundance of other elements.

Some elements do not fit into any mineral crystals that grow in Hawaiian magma. These elements increase in concentration as magma cools and more crystals form. So, the abundances of these “incompatible” elements reveal if magma has been stored before erupting. If stored long enough, the magma’s composition is changed as crystals grow and the amounts of incompatible elements increases.

When the first lower East Rift Zone (LERZ) lava sample was collected on May 3, 2018, the University of Hawaiʻi-Hilo geochemistry lab swung into action, working with the USGS Hawaiian Volcano Observatory to determine, within hours, that the erupted lava was from stored magma. The LERZ lava was much cooler (about 1090 degrees Celsius, or 2000 degrees Fahrenheit) and more “evolved” than any Puʻu ʻŌʻō lava (typically 1140 degrees C, or 2080 degrees F) erupted over the past 35-plus years. While this finding was not a surprise, it was the first time it had been documented during an eruption.

But there was one surprise: Fissure 17—the only vent not in line with the others—erupted the coolest and most chemically evolved lava ever found on Kīlauea. Its temperatures were as low as 1030 degrees C (1890 degrees F).

Previous lower rift zones eruptions on Kīlauea have shown a similar pattern—evolved magma erupted first, followed later by hotter, “fresher” magma. The early LERZ lava erupted in Leilani Estates is similar in composition to the early 1955 lava, which erupted in the same area and seems to be the most likely candidate for the parental source.

Finding evolved magma stored in the lower regions of Kīlauea, the site of many past eruptions and intrusions, is to be expected. During past events, not all of the magma reached the surface once the driving pressure was gone. That stored magma then evolved over time.

Because Kīlauea is so massive, it can take decades before magma comes back to a given area. During that time, stored magma cools, grows crystals, and slowly changes in composition. When a new intrusion forces its way through the volcano and up to the surface, it may encounter one or more of these stored magma bodies. The intrusion magma can push out and/or mix with any stored magma that is still liquid.

As the LERZ eruption continued, samples collected on May 11 showed that the lava composition had shifted to slightly hotter (1105 degrees C, or 2020 degrees F) and less evolved magma. Soon afterward, eruptions from fissure 20 produced ʻaʻā flows that rushed to the ocean.

Over the next 12 days, the lava chemistry became progressively hotter and less evolved until it leveled out at temperatures of 1130–1140 degrees C (2070–2085 degrees F). The arrival of this hotter lava preceded the high-volume, sustained eruption of fissure 8, giving scientists a heads-up that something might change.

This new lava includes abundant and visible olivine crystals, some of which resemble the type of olivine crystallizing in summit magma before the LERZ eruption sequence began. The lava composition we see now doesn’t exactly match recent Puʻu ʻŌʻō or summit lavas, but it is similar. This correlates well with geophysical observations that the volume of the summit collapse is similar in magnitude to the volume of LERZ erupted lava.

Magma travels up to 45 km (28 mi) through Kīlauea’s East Rift Zone, cooling and potentially mixing with stored deep-rift magma to create lava of slightly different compositions. Our ongoing geochemical detective work should help us get a better handle on what’s happening inside the volcano.