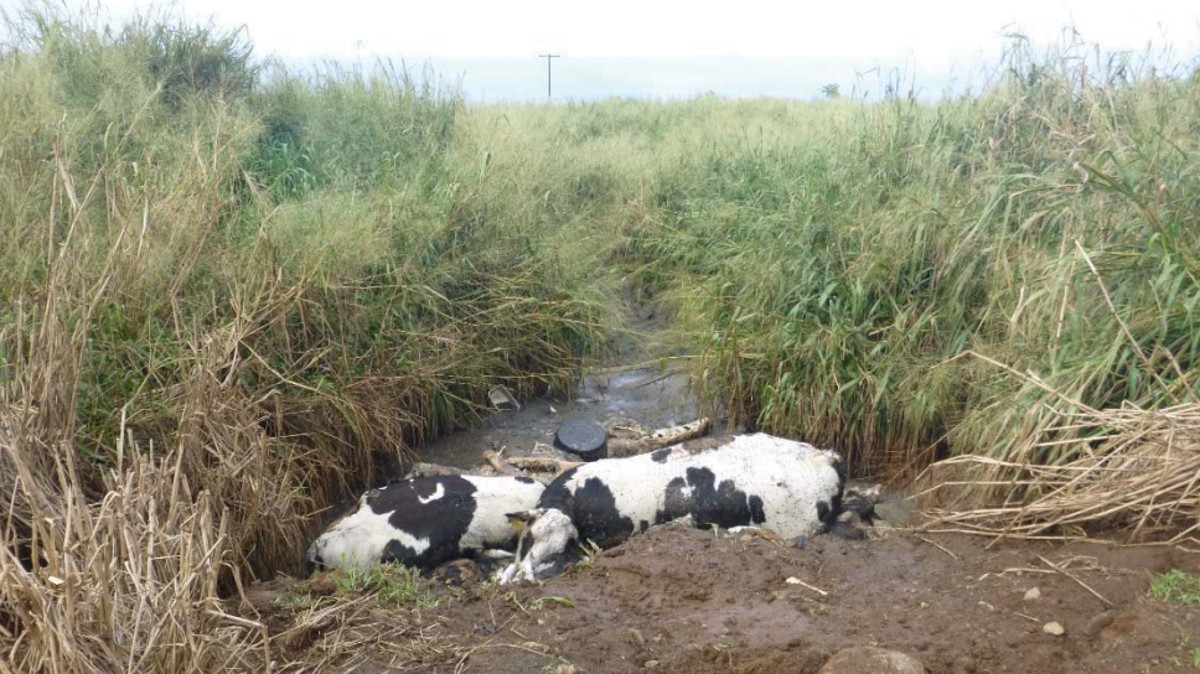 Ōʻokala, Hawaiʻi - Milking at the dairy shall cease no later than February 28, with a target to terminate all operations by April 30, 2019, court documents say. 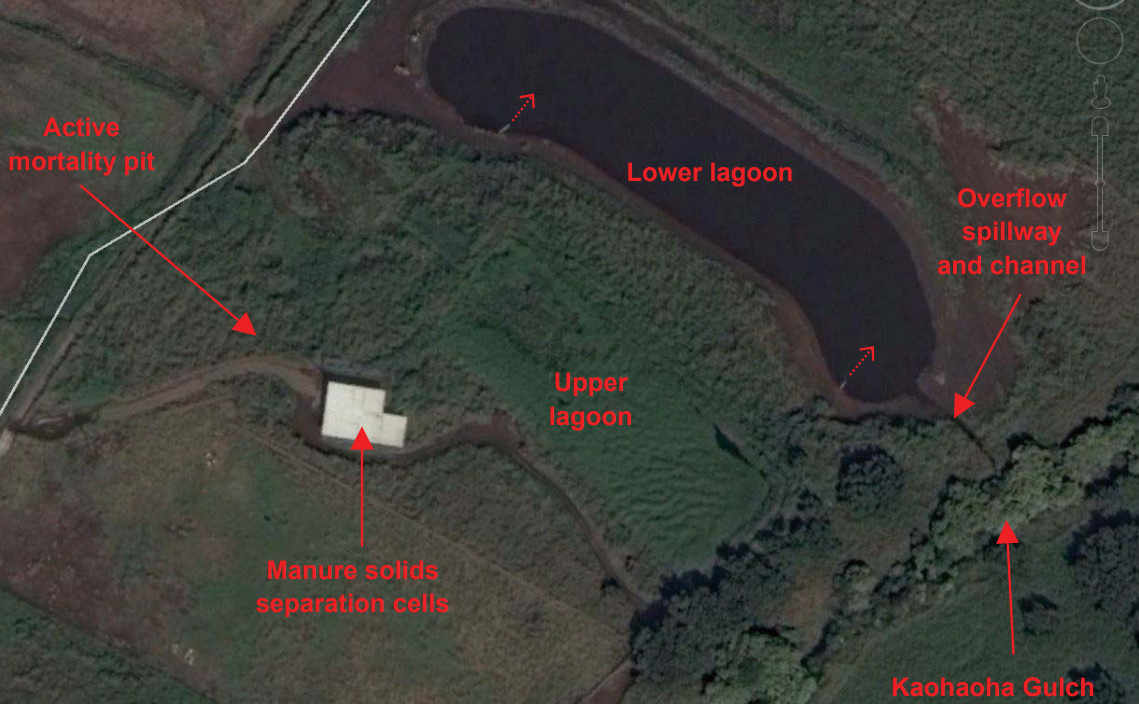 from the 2016 NPDES Inspection Report by Hawaiʻi DOH

(BIVN) – Specific dates for the closure and cleanup of the embattled Big Island Dairy on the Hāmākua Coast have been set, according to federal court documents.

Big Island Dairy, LLC shall cease its operations as a Concentrated Animal Feedlot Operation (CAFO), dairy producer, and dairy processor, with a “target date to terminate all operations by April 30, 2019,” according to the written settlement agreement, “however, presence of some young stock may continue into May.”

The settlement stipulates that milking shall cease no later than February 28, 2019, and states that the dairy company “may explore the possibility of selling its assets at the dairy site to a buyer that may undertake dairying and milk processing in accordance with its own permits and regulatory approvals.”

In May 2017, after months of complaints from the Ōʻōkala community, the Hawaiʻi State Department of Health issued a Notice of Violation and Order to Big Island Dairy, LLC for the “unlawful discharge of wastewater” from the dairy to Kaohaoha Gulch. In June 2017, community group Kupale Oʻokala and the Center for Food Safety filed suit against the dairy in U.S. District Court.

In November 2018, the Dairy confirmed that it will cease operations, saying that it “has reached a point that it lacks the additional resources needed to continue the operation under current economic and regulatory conditions.” Despite the announced closure, another wastewater discharge was reported below the dairy in December. The public was advised to stay out of Kaohaoha Gulch and the coastal waters fronting the area.

Today, the plaintiffs in the lawsuit declared “victory” in a media release announcing the settlement. Along with the specific dates for ceasing dairy operations, it is stipulated that the Big Island Dairy shall, in an orderly manner (as written):

The Center for Food Safety provided this news release on behalf of the plaintiffs:

As a result of a citizen suit by community group Kupale Ookala and Center for Food Safety, Big Island Dairy has finally acknowledged that it cannot lawfully operate its mega-dairy and has settled the lawsuit by agreeing to cease operations and clean up the site. For years, this Idaho-based concentrated animal feeding operation (CAFO) of nearly 3,000 cows has illegally discharged manure on Hawaii’s Big Island, endangering local waterways and the neighbors that rely on them with massive amounts of animal waste. In response to the groups’ June 2017 Clean Water Act lawsuit, it became clear that an industrial dairy of Big Island Dairy’s size cannot operate uphill of Ookala without causing unlawful and dangerous discharges. The timeline for removing the animals has now been finalized and filed with the court.

“Now that Big Island Dairy is officially closing, there are no words that can truly express how grateful we are knowing that our Ookala community can finally look forward to breathing fresh air again without the stench of rancid cow manure lingering in our homes and yards,” said Sophia Cabral-Maikui, founding member of Kupale Ookala. “We look forward to our streams running clear again without alarmingly high fecal and bacteria counts in our waters. Our families are also excited to be able to fish and gather from our shoreline and ocean once again.”

The settlement requires the mega-dairy to cease milking no later than February 28, 2019, with timelines for removal of livestock and a schedule to clean the facilities to reduce the risk that pollution will continue to flow from the site even after operations cease. The Hawaii Department of Health (HDOH) will retain oversight and the right to inspect the facility during the closure and a designated member of Kupale Ookala will continue to have access to the site to monitor any suspected discharges of animal waste. Civil penalties for the many Clean Water Act violations by Big Island Dairy will be assessed through the HDOH administrative process and will be paid to an appropriate Supplemental Environmental Project or Environmentally Beneficial Project, for the benefit of the Ookala community.

“Holding the Big Island Dairy and the Hawaii State government accountable for the contamination of our streams, ocean, and the Ookala community was a daunting task. We proved that a thoughtful and committed team that included the local community, our local council woman Valerie Poindexter, the Center for Food Safety, and the Law Offices of Charlie Tebbutt, can truly right a wrong. We still have much work to be done and we are committed to warning future polluters that we will be vigilant,” said Charlene Nishida, a founding member of Kupale Ookala.

The lawsuit revealed that Big Island Dairy’s operations, occurring just uphill from Ookala, have caused scores of discharges of dangerous animal waste in violation of the federal Clean Water Act and state pollution laws. CAFO practices like onsite storage of animal urine and feces in open-air pits and spraying of dairy waste during high wind or rainy days have resulted created an environment in which Ookala residents often witness brown murky water smelling of animal feces, shown to contain high levels of dangerous bacteria, flowing from the dairy into local waterways, and ultimately into the Pacific Ocean.

“It became apparent during the course of this case that Big Island Dairy could not operate a dairy at this location in compliance with the Clean Water Act while perpetuating Hawaii aina for future generations. The tremendous amount of rain, the steep slopes, and the volcanic soils made it impossible to handle the large volume of manure and manure-contaminated rainwater in a sustainable way. It has been a privilege to help the community of Ookala restore hope for a livable future,” said Charlie Tebbutt, attorney for the groups.

Because of the industrial dairy’s pollution, those in the Ookala community have been unable to fish, swim, and enjoy their own beautiful streams and ocean. For years, the local community attempted to get Big Island Dairy to stop polluting their waters, but the mega-dairy continued to pollute even after the groups filed their lawsuit. In May 2018, Big Island Dairy released 2.3 million gallons of contaminated water over three days into the waterways that flow through Ookala. Again in August during Hurricane Lane, the dairy released at least 5.9 million gallons of manure water into nearby gulches and just on Christmas Eve Big Island Dairy intentionally discharged another 600,000 gallons. Through the community’s lawsuit, it has become clear that the mainland-style large CAFO cannot be lawfully operated on the Big Island, and when forced to comply with clean water laws, such an operation is not economically feasible or environmentally safe.

“Big Island Dairy ceasing its operations has been a long time coming. Mainland-style intensive confined animal operations like Big Island Dairy have absolutely devastating effects on human health and the environment, so we’re relieved that this one won’t do any more damage. Our lawsuit demonstrates that it’s the local communities who unfairly bear the brunt of those harms. Industrial food solutions do not make sense for our fragile island ecosystem or for the people who live in it,” said Dr. Ashley Lukens, Director of Hawai‘i Center for Food Safety.

The lawsuit was filed in the federal district court of Hawaii. The plaintiff community groups are jointly represented by the Law Offices of Charlie Tebbutt, Center for Food Safety, and Amanda Steiner of Terrell Marshall PLLC.