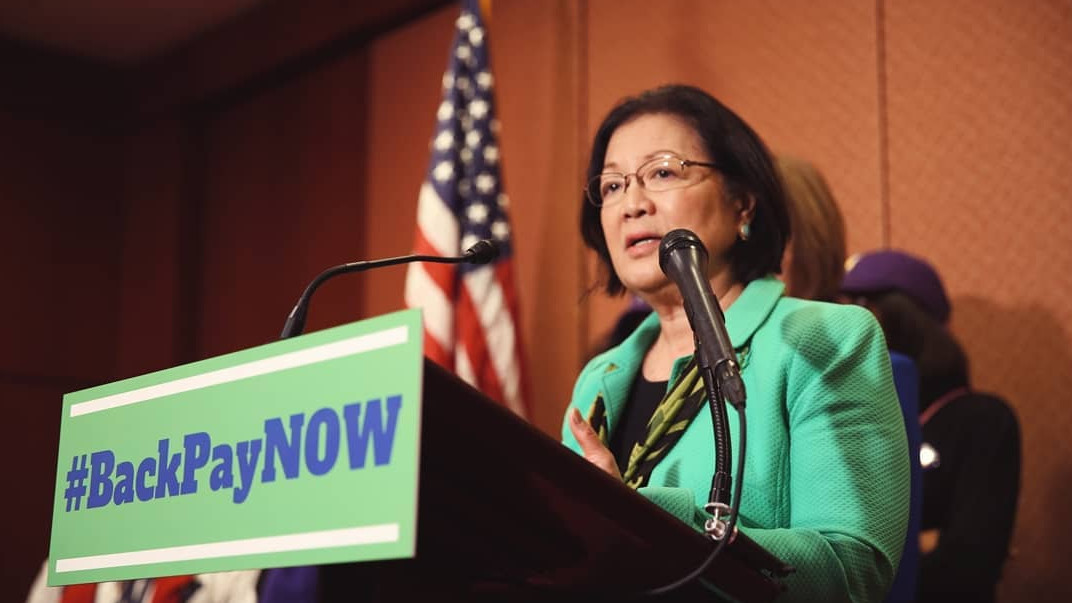 WASHINGTON D.C. - The shutdown is over, but Senators Hirono and Schatz are still pushing to protect credit scores and secure back pay for federal contractors.

(BIVN) – The government shutdown is over but Hawaiʻi Senators Mazie Hirono and Brian Schatz continue to fight for federal workers.

Today, Sen. Hirono joined other lawmakers and union members with 32BJ SEIU (Service Employees International Union) to promote legislation that would secure back pay for federal contractor employees impacted by the recent shutdown.

The 35 day-long partial government shutdown the longest in history and affected more than 800,000 federal workers and thousands of federal contractors across the country.

Hirono joined senate colleagues last week in introducing the Fair Compensation for Low-Wage Contractor Employees Act, which “would provide back pay up to $600 per paycheck for federal contractor employees who were furloughed or had their hours reduced due to the government shutdown,” the senator’s office says.

“I don’t think there is anything scarier for any family than to face the prospect of not receiving a paycheck,” Sen. Hirono said at the event. “That was happening during this totally unnecessary, unconscionable shutdown. Last week, I spent time at the Hawaii Foodbank with federal employees and contractors, and heard many stories about people facing eviction and utilizing the food bank. This kind of support for our federal contractors needs to be enacted because as government privatizes jobs, every time something like this happens, more and more people are going to be harmed.”

Meanwhile, U.S. Senator Brian Schatz (D-Hawai‘i) led a group of seven senators trying to protect federal employees from credit damage that may have been caused during the shutdown.

In a letter, the senators called on the three credit reporting agencies – Equifax, Experian, and TransUnion – to “correct information related to the people impacted by the shutdown as soon as possible,” the senators wrote.

“Workers’ credit reports and scores should not be ruined for reasons entirely outside of their control. We hope that your companies will take this opportunity to correct information related to the people impacted by the shutdown as soon as possible,” the senators wrote.

The full text of the letter follows:

To Messrs. Begor, Boundy, and Peck:


We are writing to urge you to help federal employees and contractors avoid long-lasting damage to their credit as a result of the financial distress the government shutdown caused. By no fault of their own, more than 800,000 federal employees and federal contractors missed two paychecks, placing them in serious danger of missing payments on their mortgages, student loans, car loans, credit cards, and other debt. We are pleased that financial institutions across the country provided forbearance and low-cost credit to those impacted by the shutdown. But these measures may not be enough to protect these workers’ credit reports and credit scores.


Forbearance was provided on a case-by-case basis and only to those workers who reached out for help. For many, they may not have known or been able to take advantage of the relief that financial institutions were willing to provide. Unfortunately, the workers who are most vulnerable are also the least likely to have the time and resources to mitigate the damage of the shutdown on their credit standing. In addition, at least some institutions were unclear on their obligation to report late or missed payments to consumer reporting agencies. This confusion prompted federal financial and housing regulators to release guidance on January 11, 2019, clarifying that financial institutions had the discretion to delay or suspend reporting late or missed payments as a result of the shutdown. For these reasons, we are very concerned that federal employees and contractors were unable to prevent harm to their credit reports as a result of the shutdown.


If reported late or missed payments as a result of the shutdown remain on the credit reports of impacted workers, we are concerned this information will undermine the accuracy of their credit reports and result in serious financial consequences. This negative information on federal workers and contractors’ credit reports could lower their credit scores, and as a result increase the cost of credit or prevent them from getting loans, mortgages, employment, or rental housing. If these workers have no way to protect their credit, the financial damage from the shutdown could last well into the future and extend beyond those individuals to the financial institutions that serve them and the economy as a whole.


In order to ensure the accuracy of credit reports, we urge you remove negative information furnished during or within one billing cycle of the shutdown upon request by federal employees and employees of federal contractors who were impacted by the shutdown. In order to help impacted workers in the aftermath of the shutdown, it is important that they have access to their credit report to see what, if any, negative information has been reported. Therefore, we also urge you to remind consumers of their right to access a free annual credit report.


Your companies have an obligation under the Fair Credit Reporting Act to “assure maximum possible accuracy of the information concerning the individual about whom the report relates.” Information furnished as a result of an unexpected shock due to an unprecedented government shutdown may not be an accurate indicator of an individual’s creditworthiness. The financial institutions that rely on the information you collect have also recognized the potential harm of furnishing this information, which is why so many of them chose not to report late or missed payments. Your companies are uniquely positioned to help restore the accuracy of these credit reports and to help lower income workers who were less likely to seek help from their creditors and most vulnerable to the negative impacts of the shutdown.


Workers’ credit reports and scores should not be ruined for reasons entirely outside of their control. We hope that your companies will take this opportunity to correct information related to the people impacted by the shutdown as soon as possible.