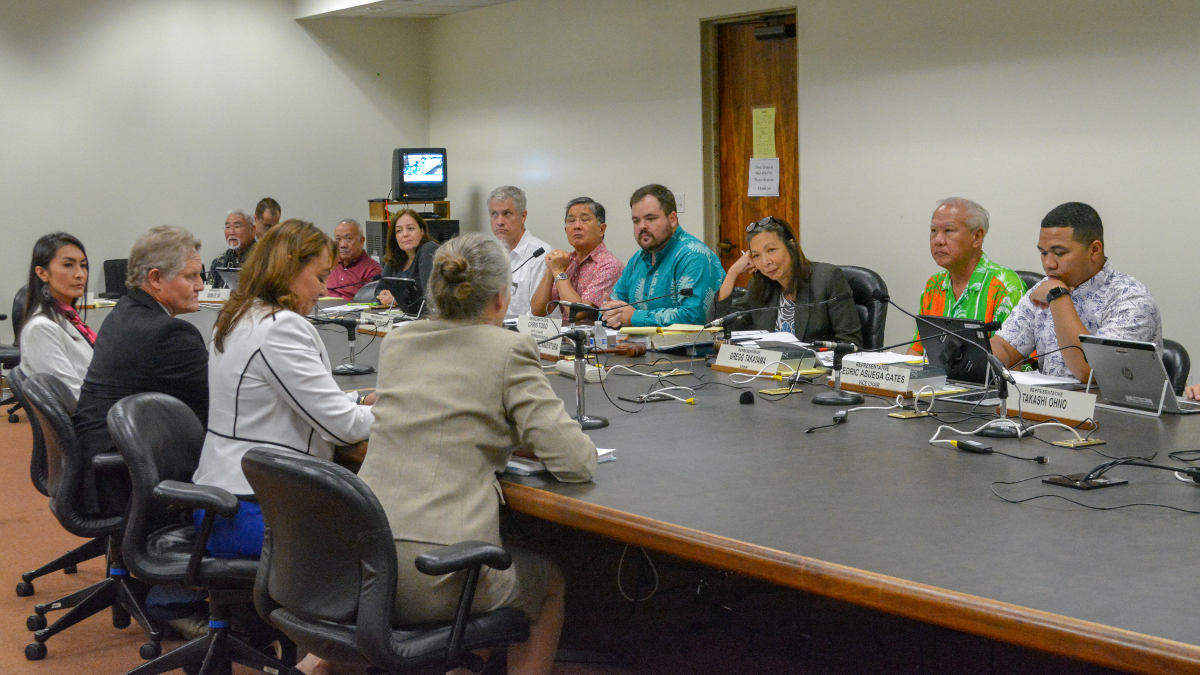 (BIVN) – In the wake of the recent Kīlauea Volcano eruption, a joint House Committee today voted to amend a bill to provide disaster relief funding for Hawaiʻi County in the amount of $60 million, less than half the amount requested by the County at the beginning of the 2019 legislative session.

In attendance on behalf of Hawaiʻi County were councilmembers Sue Lee Loy, Ashley Kierkiewicz, and Tim Richards, as well as Research and Development Director Diane Ley.

The House issued a media release following the vote, breaking down the numbers:

Of the $60 million total, $20 million would be set aside in a state grant and $40 million would be designated for a state loan with an expected payback from the federal government. Spending the funds would be subject to the Hawaiʻi County Council approval. The state has already provided $22 million in emergency funds for Big Island disaster relief, bringing the total package to $82 million.

The bill has the support of the House, Senate lawmakers and leadership, the Hawaiʻi County Council, and the Ige Administration and now moves to the House Finance Committee where Chair Sylvia J. Luke has said she would expedite it.

On January 31, Mayor Harry Kim went before the House Finance and Senate Ways and Means Committees in support of a $155 million ask. Previous estimates of the County ask, reported around the time of the eruption, were in the $800 million range.

In the months and weeks leading up to the 2019 legislative session, state lawmakers appeared to be growing frustrated by the lack of specifics in the County ask, which “has been literally been all over the board,” as described by Governor David Ige’s administrative director Ford Fuchigami in a January information briefing. “We asked them to get us a bill so that we could submit on their behalf. Unfortunately, by the time the budget came around and we were ready to submit, they didn’t get anything to us,” Fuchigami said.

“I know there’s been a lot of discussion of ‘how much are you asking for’, because we did not submit, initially – as [Finance Chair] Ms. Luke has accurately pointed out – a detailed plan,” Mayor Kim apologized to state lawmakers on January 31. “Because I simply tell you, we didn’t have a detailed plan. But we made a mistake – as I hope we conveyed to Ms. Luke – that was our mistake.”

During a Hawaiʻi County Council meeting on February 4, Puna councilmember Kierkiewicz appeared concerned when speaking to Mayor Kim’s administrative assistant Andy Levin about the status of the disaster recovery bill. Levin said there has been “some some difficulty in finalizing a position,” and that “various numbers that have been floated.”

“We don’t have a lot of time and then before we know it it’s going to be the end of session,” Kierkiewicz said. “So where is this difficulty arising from?”

“I’m a little concerned if that position has changed,” Kierkiewicz said of a recent presentation made by the administration to the Big Island state delegation, “because since then we’ve all been championing the same message and it’s a little awkward if the message is changing this late in the game.”

Sources say there were real concerns in recent days that the entire bill might get scrapped by frustrated state legislators.

Although the money provided in HB 1108 is less than half of what the administration had asked for, Hawaiʻi County Council Chair Aaron Chung said the amount allocated by the House “exceeded expectations”. Speaking from Hilo after receiving the news of the advancing legislation, Chung expressed thanks to Lee Loy, Kierkiewicz, and Richards for their advocacy and said he was pleased to hear the spending bill included County Council oversight.

“People on the Big Island are devastated. Their lives have been thrown into chaos,” said Rep. San Buenaventura. “The county cannot afford to remedy this destruction onits own and needs this state support.”

The eruption began on May 3 and eventually destroyed 716 homes and covered nearly 14 square miles in the Puna area of Hawaiʻi Island.

Sen. Russell E. Ruderman (Puna, Ka‘u) thanked the Big Island lawmakers in both the House and Senate for their hard work securing this relief for the people affected by the lava destruction.

“I’m hopeful about this bill, as well as the Senate companion bill, and grateful for the efforts of both Chambers of the Legislature on behalf of the residents of Puna,” Ruderman said. “The Kilauea lava flow inflicted devastating damage, wiping out the homes and livelihoods of hundreds of residents, including many of my friends and neighbors. These measures will provide for much needed relief and recovery.”

Gov. David Ige said lawmakers have visited the disaster sites many times and understand the needs of the people trying to rebuild their lives.

“I want to commend the Legislature for their quick action in response to the needs of the Puna community and Hawaiʻi Island.,” Ige said. “Recovery on Hawaiʻi will be a long-term venture and this measure will provide much, much needed relief.”

Hawaiʻi County Council member Ashley L. Kierkiewicz said Big Island residents have “oceans of gratitude” for the support they have been given today.

“Rep. San Buenaventura really helped to usher in this bill and we are very grateful to House and Senate leadership and the money committees for really seeing that this was important,” Kierkiewicz said. “Not just to Big Island or the Puna community, but for everyone in Hawaiʻi. We are all in this together. We were embraced as part of the family.”