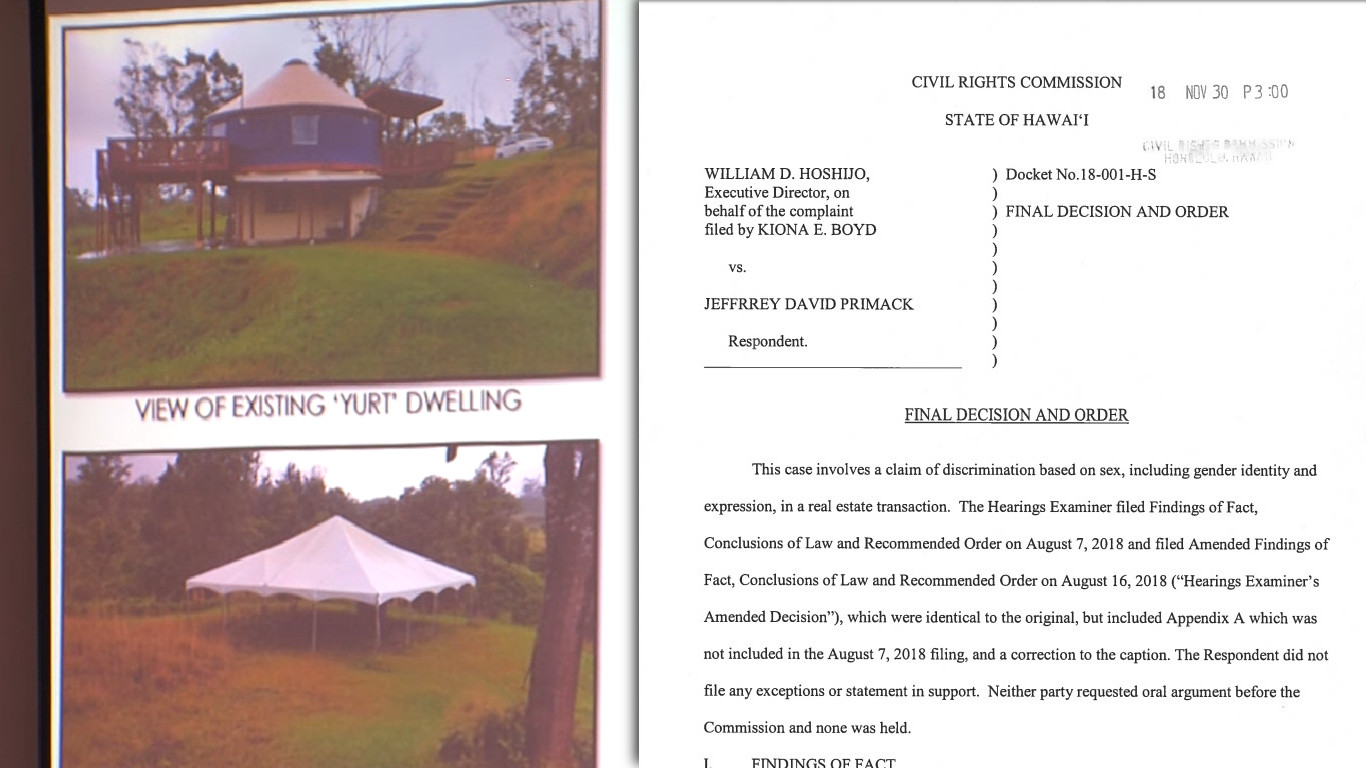 Graphic by BIVN: image of Hakalau property by Hawaiʻi County Planning Department (left) next to Decision and Order 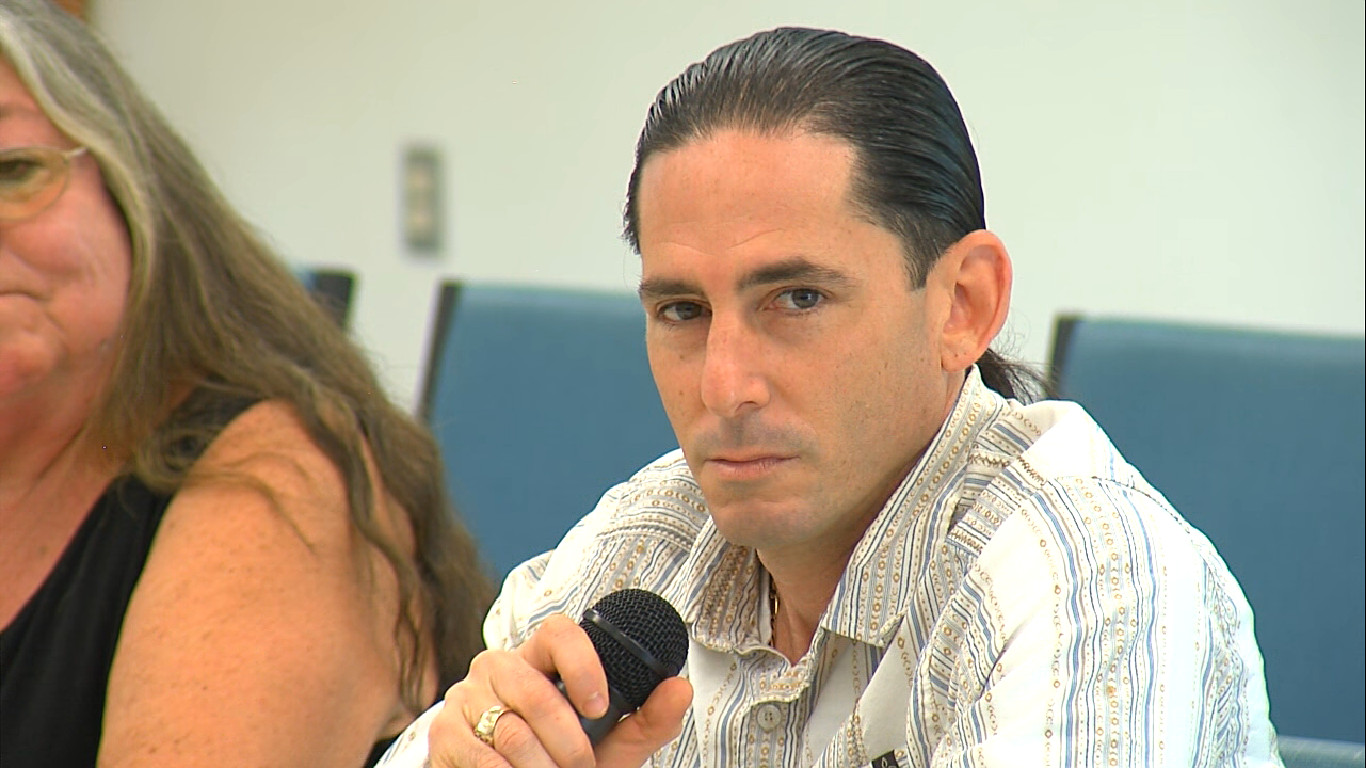 file image of Jeffrey Primack from a 2018 planning commission hearing

(BIVN) – The landlord of a property in Hakalau was found to have discriminated against a caretaker based on her gender identity, the Hawaiʻi Civil Rights Commission decided.

The commission issued a news release on Monday, although the final decision and order was issued on November 30, 2018. Landlord Jeffrey Primack, the respondent in the case, did not appeal the decision.

The complainant, Kiona Boyd,  was previously a caretaker for Primack’s Hakalau-area ag land off Kama’e’e Road, and was living in a yurt on the property.

On July 2, 2015, according to the Hawaiʻi Civil Rights Commission hearing examiner’s findings of facts, Primack told Boyd “to leave the property because he believed his guests for his Qigong retreat would react negatively toward her because of her gender transition.” Threatening text messages followed, the findings show.

In the commission’s decision and order, Boyd was awarded a total of $95,000 in damages, including $75,000 in emotional distress damages and $20,000 in punitive damages. Primack did not appeal the decision, the commission says.

According to the Hawaiʻi County Planning Department, Primack was cited with a zoning code violation in Janaury 2017 for offering unpermitted retreat functions on the property. Primack appeared before the Windward Planning Commission on March 1, 2018, seeking a Special Permit to legitimize the operation that included overnight accommodations for up to twelve guests and the development of a certified kitchen on a 15-acre portion of the larger, 98-acre parcel.

As he appeared before the Planning Commission, Primack was already embroiled in motions and hearings regarding Boyd’s housing discrimination complaint, although the matter was not discussed during the planning meeting. The planning commissioners voted to grant Primack the Special Permit. Less than a year later, the Hawaiʻi Civil Rights Commission ruled on Boyd’s complaint.

“The decision from the Commission reaffirms its commitment to the elimination of discrimination in housing,” said Executive Director, William D. Hoshijo, in a media release. “The award of punitive damages in the Commission’s Final Decision and Order should signal to housing providers that harassment, intimidation, and discrimination against individuals for expressing their gender identity will not be tolerated.”

The news release provided by the Hawaiʻi Civil Rights Commission explains more about the case:

Boyd’s fair housing complaint alleged that Primack harassed, threatened, and forced her off the subject property after he saw her expressing her gender identity for the first time in person. Boyd lived and worked as the property caretaker while Primack resided in Florida. Primack visited the Hawaiʻi property to hold Qigong retreats for his mainland-based business and first met Boyd in 2012 when she was using a name traditionally associated with the male gender and presented as male.

At hearing, Boyd testified that she suffered emotional distress after Primack forced her off the property and harassed and threatened her both verbally and through text messages. Primack’s text messages included multiple threats to strangle, punch, and inflict pain on Boyd, belittled her gender identity and expression, and contained gender-based slurs. Primack gave Boyd one day’s notice to vacate the property, forcing her to become homeless and live out of her car.

In the Commission hearing, Dr. Rebecca Stotzer, an expert on bias crimes against lesbian, gay, bisexual, and transgender (LGBT) individuals, offered expert testimony and a report on the pervasive stigmatization of transgender individuals, and research indicating that transgender women are at greater risk of being subjected to violence. In light of this heightened risk of harm, transgender individuals have reason to take threats of violence seriously, stated Dr. Stotzer.

The Hawaiʻi Civil Rights Commission is responsible for enforcing state civil rights laws that prohibit discrimination in employment, housing, public accommodations, and state-funded services. If you feel you have been subjected to discrimination on any basis protected under state law, contact the HCRC at: telephone (808) 586-8636, or email DLIR.HCRC.INFOR@hawaii.gov.