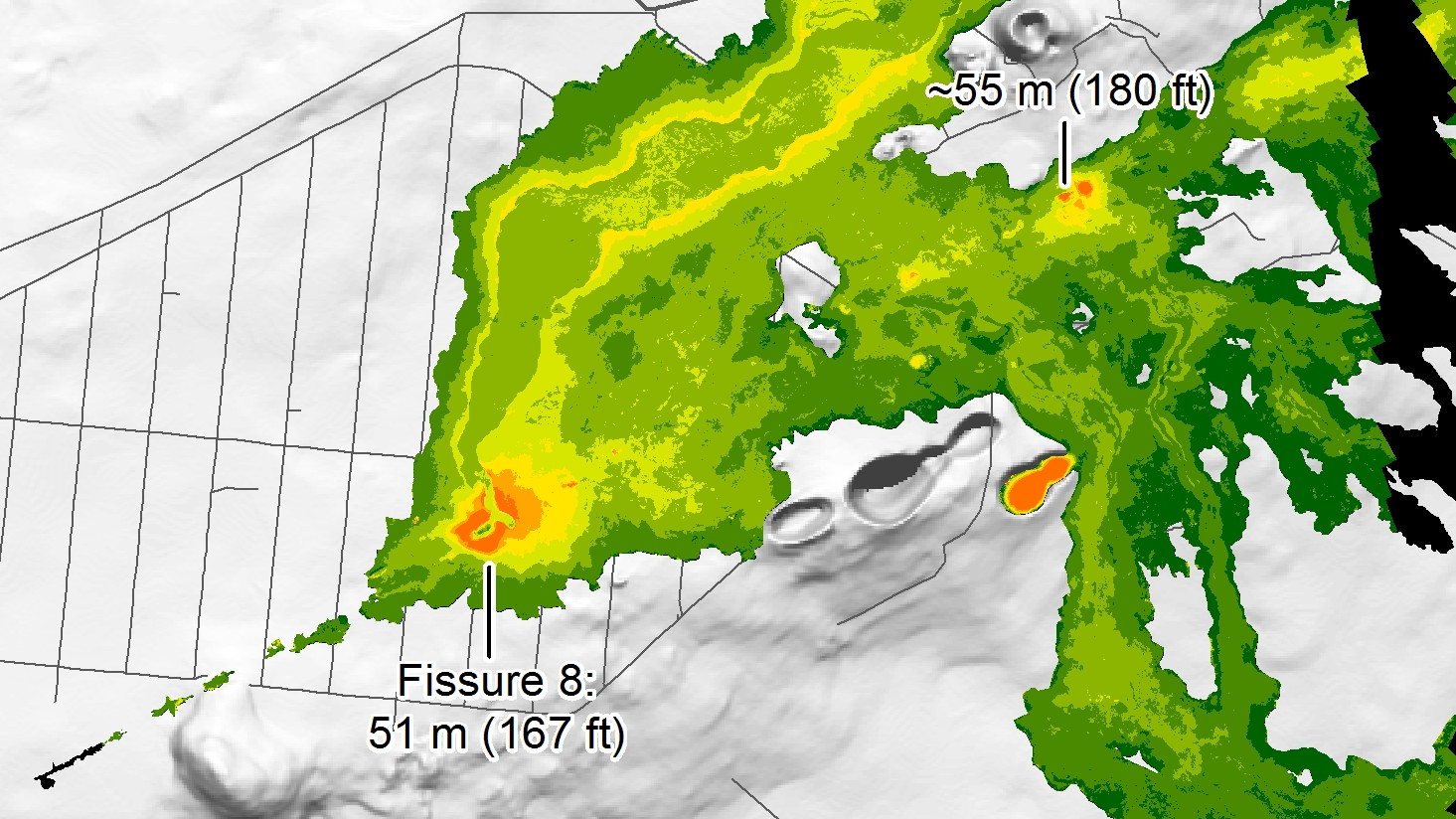 VOLCANO WATCH: How is lava flow thickness measured and why does it matter?

HAWAIʻI ISLAND - The weekly article by the USGS Hawaiian Volcano Observatory examines the process of measuring lava flow thickness, and takes a look at the recent eruption of Kīlauea.

(BIVN) – In February, the USGS Hawaiian Volcano Observatory published the first map on its website since the final days of the 2018 eruption of Kīlauea Volcano on the Lower East Rift Zone. It was a preliminary map showing lava flow thicknesses, with startling variation. Along the coast, where lava entered the ocean at Kapoho and Ahalanui, the thickness of the lava was measured at 919 feet. 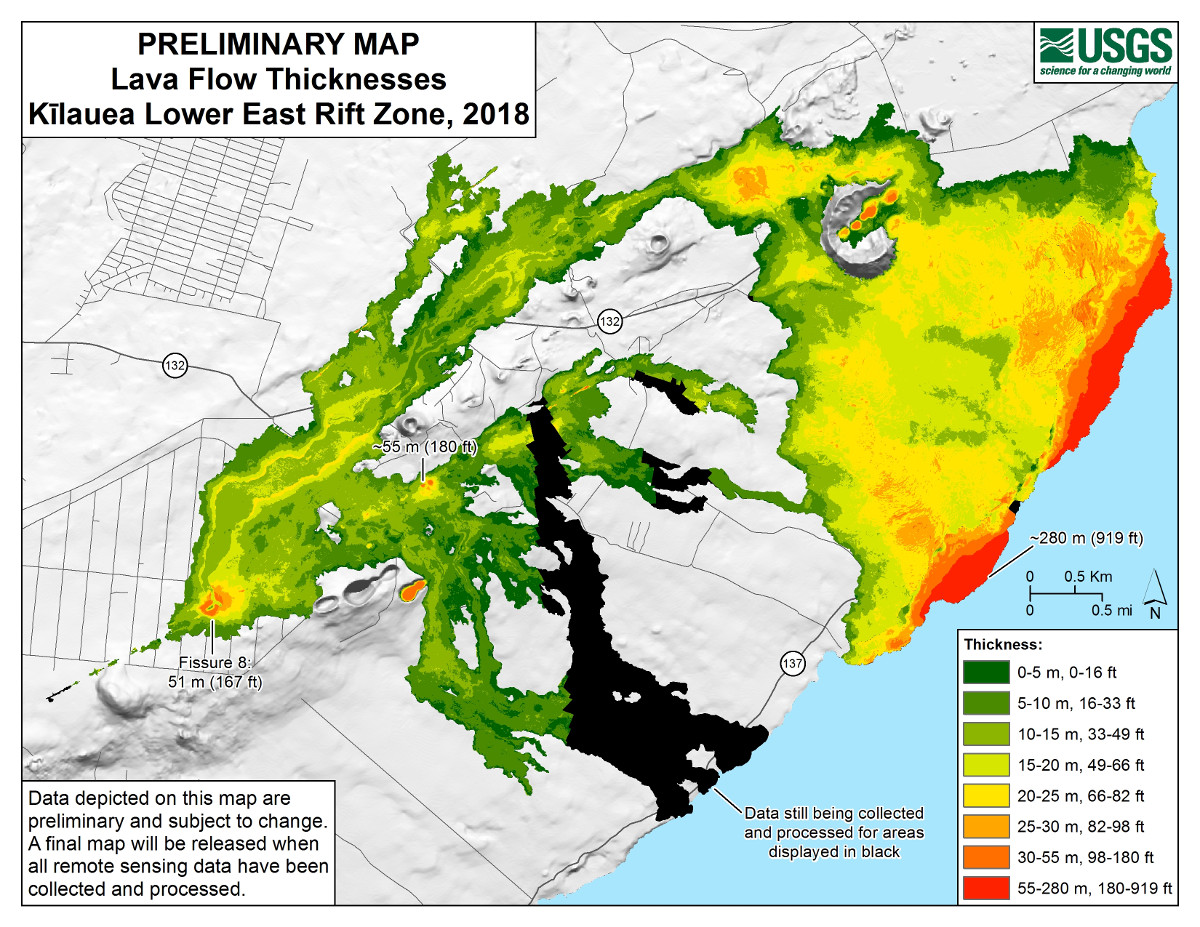 Eruption rate (how much lava comes out of the ground per unit time) is probably the best measure of volcanic activity, and the first step in that calculation is to measure lava flow thickness and area.

The flow volume was then calculated as the product of the flow area multiplied by the average flow thickness. The eruption rate equaled this volume divided by the duration of the eruption in seconds.

But this method didn’t capture all the variations of lava flow thicknesses across flows. For example, many ʻaʻā flows, like Kīlauea’s fissure 8 lava flow in 2018, host an empty lava channel. If we assumed that the flow was uniformly as thick as the height of its edges, we would overestimate the lava flow volume as well as the eruption rate.

In 1993, scientists used an airborne radar flown over Kīlauea at an altitude of just under 8 km (26,000 ft). The radar could image a lava flow with accuracies of 1-2 m (1-2 yds) and determine thousands of surface elevations for each lava flow, not just a few thicknesses along its edge. Flow volumes calculated this way (pre-eruption elevations of the ground surface subtracted from the 1993 elevations of a lava flow) were slightly higher than those calculated with the simpler method of measuring thicknesses along flow edges.

The eruption rates calculated for the continuous lava eruption after 1986 were much lower than for the episodic high fountaining phase—3-5 cubic meters (800-1,300 gallons) per second.

The next improvement in measuring flow thickness was the development and use of Light Detection and Ranging (lidar). Specialized equipment was flown over an area by airplane or helicopter, from which billions of laser pulses showered down to the ground. This produced details on lava flow surface elevations accurate to a few centimeters (an inch or less).

Over the last few years, similar results have been obtained by geologists in helicopters snapping overlapping digital photos of the ground, each tagged with the camera’s GPS coordinates. Computer software, using the “Surface-from-Motion” (SfM) technique, can automatically identify common locations in adjacent photos and assemble a 3-dimensional image of ground elevations from hundreds of photos. A bonus is that the photos can be stitched together to produce a single, high-resolution, photo mosaic map of the area.

The posted map is preliminary for two reasons: 1) It is missing coverage of some earlier lava flows to the south, and 2) we need more carefully surveyed ground control points to match the areas unaffected by the 2018 lava flows in the pre- and post-eruption elevation models.

Using the preliminary map, we can calculate a rough estimate of the total volume of lava erupted and added to the land surface—about 0.8 cubic kilometers (over a million cubic yards). When corrected for voids in the lava and divided by the duration of the eruption, this yields a minimum eruption rate of about 50-200 cubic meters (13,000-53,000 gallons) per second. This eruption rate is significantly larger than most, if not all, known Kīlauea eruption rates.

Kīlauea Volcano’s 2018 lower East Rift Zone eruption was a truly remarkable, but very destructive, event that has prompted much discussion and rethinking in various fields, from volcanology to emergency management and land use planning. HVO scientists will be working to better understand the eruption and its significance for years to come.