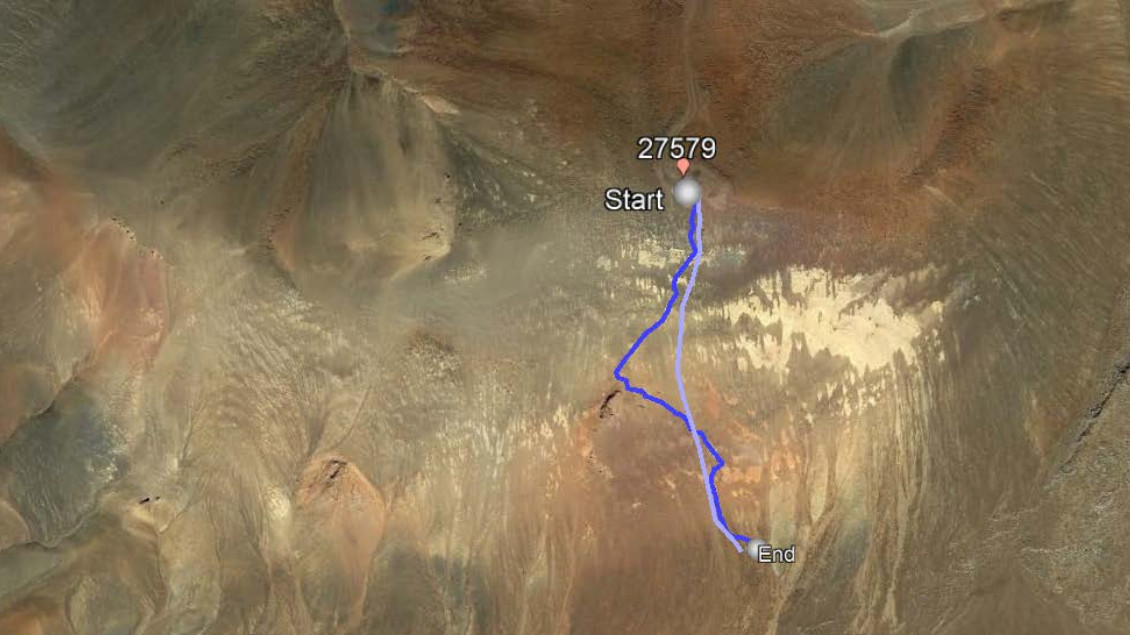 FROM THE REPORT: Puʻupoliʻahu showing mapped route (dark line) and approximate 2nd route (light line). The 3rd route was in the same general vicinity of the first two

MAUNAKEA, Hawaiʻi - The University of Hawaiʻi says it found no damage following the high profile stunt, and said it reaffirms the need for management rules. 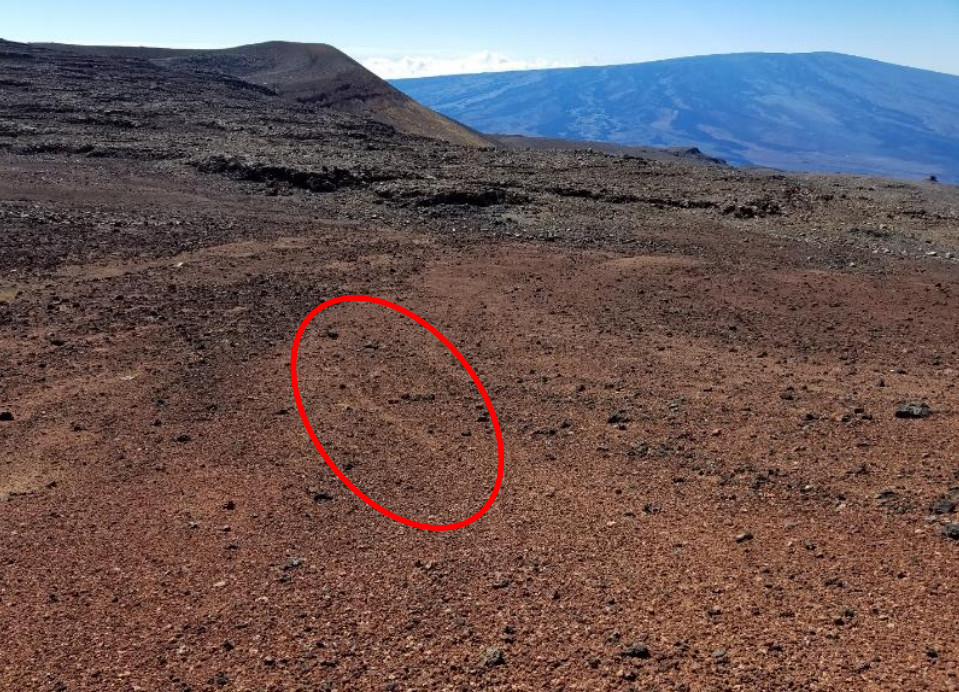 In one of many similar photos found in the report, this image depicts the bottom of the area skied and the lowest visible evidence.

(BIVN) – An investigation into a viral video showing three people skiing down a snow-free slope of Mauna Kea has been completed.

The University of Hawaiʻi, which is responsible for managing the summit area of Mauna Kea under a lease agreement with the state of Hawaiʻi, says the report found there was no damage to cultural, archaeological, natural or scientific resources on Puʻupoliʻahu, the sensitive cinder cone over which the skiers traversed. However, the university says the incident “highlighted the need for administrative rules for public and commercial activities on University of Hawaiʻi managed lands on Maunakea, which the university is currently pursuing.”

According to the report:

On or about 31 January 2019, two skiers and one snowboarder “skied” the snow-free cinder of Puʻupoliʻahu. Based on the participants’ video documentation and site investigation, the activity also likely involved two additional people, who operated a drone and drove the vehicle. The most likely sequence of events included parking at the north side of Puʻupoliʻahu, hiking up the trail to the summit; starting skiing from near the summit (~13,620 ft above sea level); down the south-facing slope; stopping where the slope lessens at approximately 13,140 ft above sea level; and hiking out the Batch Plant (aka Park 3 or Lake Waiau trailhead) where they were picked up by the vehicle operator. Total elevation change of the skiing activity was approximately 480 feet and the distance skied was approximately 1,000 feet.

The event “drew widespread condemnation and an eventual apology from those involved,” the University said.

According to the report, the nearest historic property, site is # 27579 located at the summit of Puʻupoliʻahu, does not appear to have been impacted. “Natural freeze-thaw and solifluction processes will likely remove physical evidence of the activity over the course of time,” the documents says. The report made this comment on Cultural Awareness:

This group ignored the sign that Pu‘upoli‘ahu is a sacred site, hiked up to the top and skied/snowboarded down her slopes and hiked off trail on the way back to their pickup point. They did not seek permission to ski on snowless ground nor did not ask permission to use a drone in an area where drones are prohibited. Finally they did not obtain a film permit from the State Film office to film on State land. OMKM would never have allowed this type of activity, nor the filming of it, because it is not only disrespectful but also harmful to the cultural and physical landscape. Further, filming and showing the video clip would only encourage more of this type of behavior.

“There was no legal recourse to penalize the individuals because no laws were broken,” the university wrote in a Tuesday media release. “UH is in the process of developing administrative rules, an essential resource management tool that would address these types of situations.” The new rules would not allow snow-free skiing anywhere on the summit, and would allow the university the impose fines for such actions.

But the rules themselves have also been criticized, mostly by those who do not believe the University should have such rulemaking power over the mountain, or who disagree with the way UH was managed the lands on Mauna Kea over the years. A second round of formal public hearings on the proposed rules are tentatively scheduled for spring.