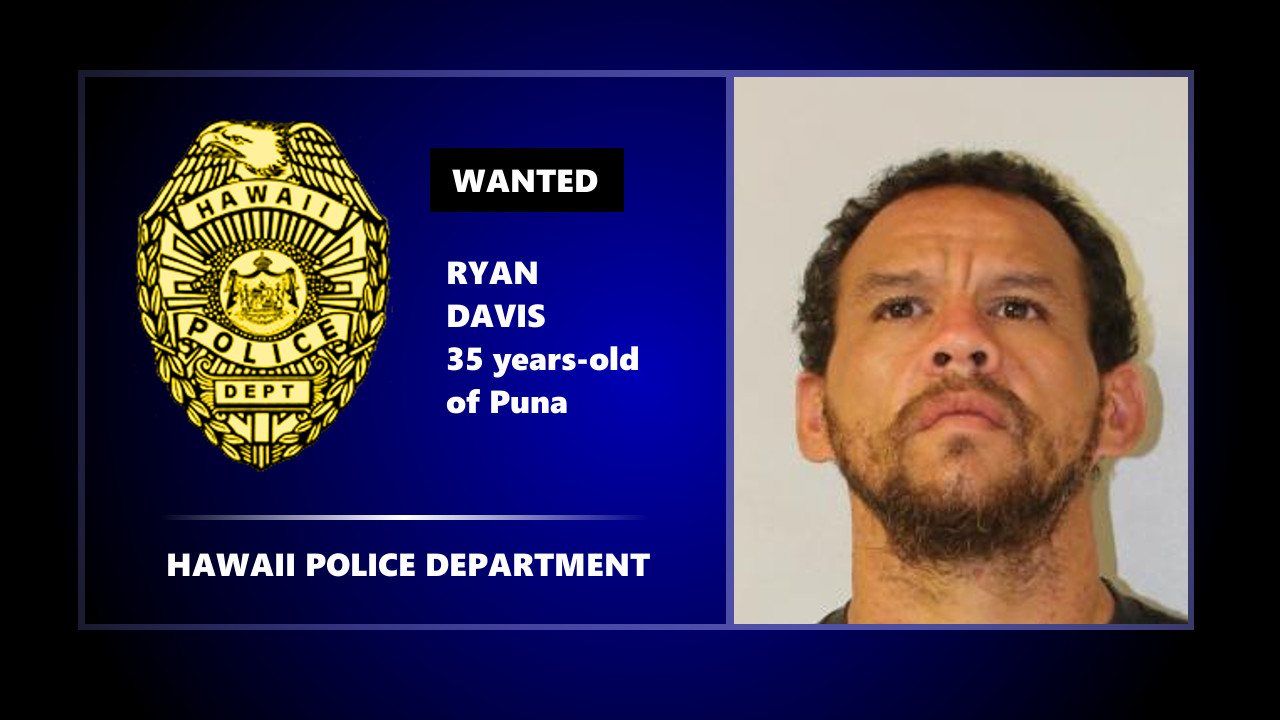 HAWAIʻI ISLAND - Police made an arrest this morning after issuing an islandwide all points bulletin asking for the public’s assistance in finding 35-year-old Ryan Frederick Davis of Puna.

UPDATE (1:50 p.m. HST) – The suspect who was wanted in the Fern Acres shooting death of a 38-year-old Puna man has been arrested. Police report:

11:30 a.m., Tuesday, (March 19), detectives from the Area I Criminal Investigation Section and Special Enforcement Unit located 35- year-old Ryan Frederick Davis on Plumeria Street in Fern Acres and arrested him without incident for second-degree murder. Davis is being held in the police cellblock while detectives continue to investigate.

(BIVN) – As detectives continue to investigate the death of a 38-year-old Joshua John Santos, who was shot to death in Fern Acres on Monday morning, police have issued an islandwide all points bulletin for a Puna man wanted in connection with the murder case.

Police are asking for the public’s assistance in identifying the whereabouts of 35-year-old Ryan Frederick Davis of Puna. “Davis is described as a local male, 5-feet-7-inches, weighing about 230 pounds., heavy build, tan complexion, unshaven, neck-length curly black hair, and with brown eyes,” police said in a media release. “Davis has multiple tattoos along both arms.”

“Police caution the public from approaching Davis,” the release warned, “as he is considered armed and dangerous and instead are asked to call police at (808) 935-3311 to report his location.”

A half hour after midnight early Monday morning, Hawaiʻi Island Police say officers responded to the Fern Acres subdivision “after receiving a report of a man with a gunshot wound lying on the driveway of a Plumeria Street residence.” The medical examiner performed an autopsy on the body of Joshua John Santos and determined the cause of death as gunshot wounds to the chest and ruled the death as a homicide.

Anyone who may have information about this incident is asked to call Detective Kelly Moniz at (808) 961-2385 or email Kelly.moniz@hawaiicounty.gov or the Police Department’s non-emergency line at (808) 935-3311.