HILO, Hawaiʻi - The hearing on the Olson Trust applications before the Windward Planning Commission was continued to the next meeting, but the public still had a chance to testify. 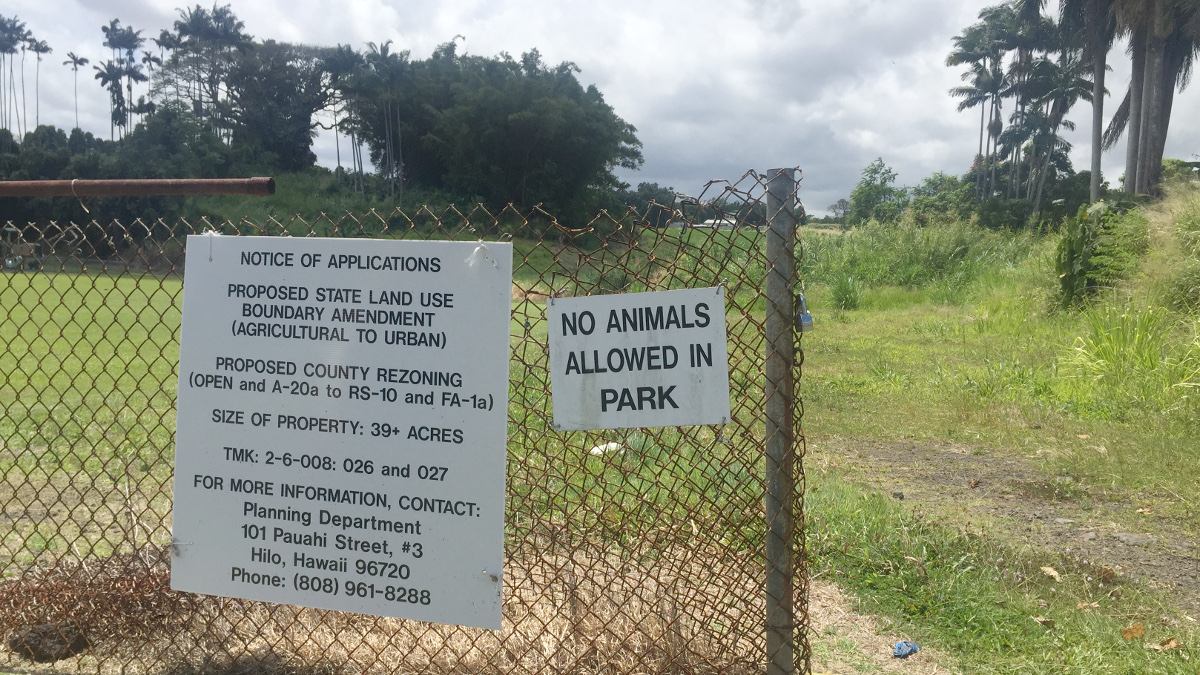 Notice posted by the property in Puueo

(BIVN) – A hearing on applications to change the zoning on land between Clem Akina Park and Dodo Mortuary in the Puueo-area of Hilo was continued to the next Windward Planning Commission meeting in May, but not before the public had a chance to weigh-in.

Two testifiers spoke at the April 4 commission meeting held in Hilo, and questioned the land title held by the Edmund C. Olson Trust on the agriculturally-zoned parcel.

“How did it get from crown lands, which was leased by the crown,” asked Jeno Enocencio, who knows the area well. “We need to look further into this. If there is a title to that land, I think Mr. Olson needs to present that and also the Bureau of Conveyances need to acknowledge the fact that there is a clear title and it’s not cloudy.”

Sharing the information he often shares with various governing bodies, Vicente said Kalakaua “bumped up the leases from 3 to 5 years to 25 years. He knew the United States was up to no good and that’s why those lands was never seen illegally ceded in 1898. They were leased out as agricultural lands to the sugar, pastoral, coffee. That’s why whenever you have the zoning Agriculture – you notice – those are the leased lands under the Kingdom. What they’re trying to do is get a zoning change from the Land Use Commission, supported by HUD, and supported by the Hawaii County Planning Department, that has no jurisdiction over these lands. These are not the ceded lands. The ceded lands fall under Hawaiian Homes. And that’s 1,750,000 thousand acres. There’s over 2 million acres that was not ceded to the United States illegally. And there’s a reason for that. There was a contract, they couldn’t break.”

Enocencio also had other concerns. For example, he wanted to know if a cultural survey was ever anticipated in the project, since “there’s a lot of artifacts still being discovered on the land.”

“There’s a hydrology issue which needs to be really looked into, as far as drainage,” Enocencio said, adding that it worked well with cesspools, but now “I don’t think it’s gonna work work too well with sewage being pumped down all the way down to Keaukaha.”

Commissioner Jon Replogle asked about the drainage and the condition of the ag land. “I was told this: that many new subdivisions are happening as result of needed housing and those small areas were impractical to farm because of what they would do with adjoining people living there,” Replogle said.

“If you go to Clem Akina Park right now, you’ll see uala being planted -sweet potato, yeah?” Enocencio answered. “These are prime agricultural lands. Deep soil, rich soil, that we should be using for food. For ranching and farming.”

Enocencio recently had a lease on nearby agricultural lands through Kamehameha Schools. That situation is currently in litigation, Enocencio said.