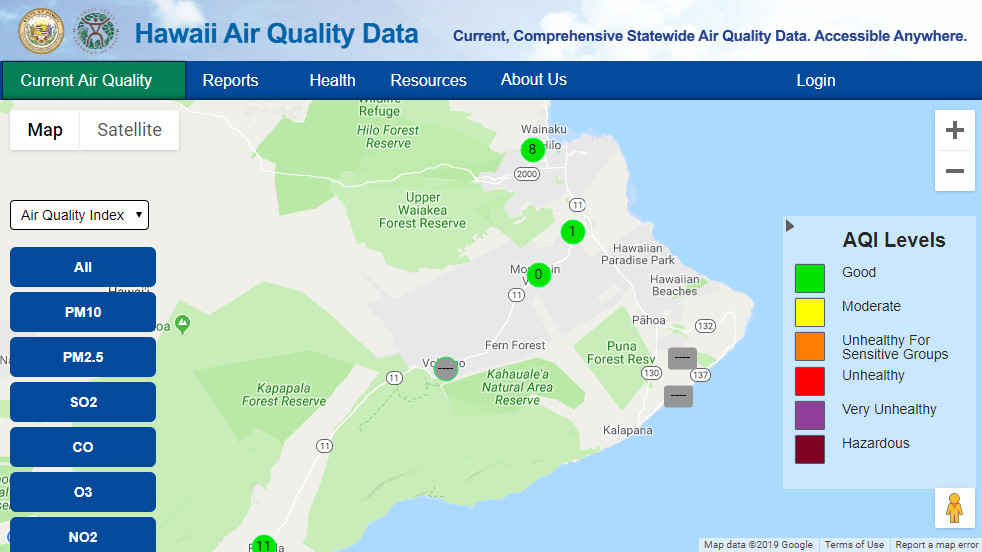 image from the new DOH website, which features an interactive map

HAWAIʻI ISLAND - A Hawaiʻi state health department spokesperson says the three stations are offline, and will be removed from the website shortly.

(BIVN) – A few days ago, on the eve of the one-year anniversary of the eruption of Kīlauea Volcano on the lower East Rft Zone – and to coincide with National Air Quality Awareness Week – the state unveiled a new website that provides near real-time data on the air quality in Hawai‘i.

Now that the eruption is over, green circles – indicating good air quality levels – abound across the Hawaiʻi.

However, one section of the Big Island map shows what appears to be missing information: two stations in Puna and one in Volcano are displaying grey circles and/or rectangles, with a dashed line.

Big Island Video News made an inquiry, and we heard back from health officials.

According to Anna Koethe, the Public Health Information Coordinator for the Department of Health, the Clean Air Branch says the “grey circle/rectangles with a dashed line inside the symbol indicates that the station is offline.”

Koethe said the Volcano and Puna (Leilani Estates and Kalapana) monitoring sites “were temporarily established to provide data during the Kilauea volcanic eruption. Since the eruption has stopped, the Volcano and Kalapana temporary sites have been taken down and will be removed from the website shortly.”